Xanthophyll is a type of accessory pigment or phytochemicals, which belongs to the class of “Carotenoids”. In many vascular plants and algae, xanthophylls act as the light-harvesting protein complexes. Xanthophylls are rich in antioxidants, which prevent the cells from damaging. In photosynthetic eukaryotes, the xanthophylls are usually bound to the chlorophyll molecules.

Xanthophylls are the pigment molecules present within the light-harvesting complex, which protect the photosynthetic organisms from the toxic effect of light. In this context, you will get to know the meaning, molecular structure, occurrence, types, cycle, functions and isolation of xanthophyll.

Xanthophyll merely refers to the light-harvesting accessory pigments, which work coordinately with the chlorophyll-a. It can absorb light of a wavelength in a range of 425-475 nm. Xanthophylls are primarily of three types, namely lutein, zeaxanthin and cryptoxanthin. They are highly antioxygenic molecules, which protect the cell from damage and ageing.

Xanthophyll is highly beneficial for eye health, as it reduces the risk of eye cataract and macular degeneration. Xanthophylls or Phylloxanthins are the yellow colour pigment naturally present in the plants. A xanthophyll can isolate from the plant extract.

Xanthophylls occur naturally in the plants, which regulate the light energy and act as “Photochemical quenching agent” that deals with the exciting form of chlorophyll or triplet chlorophyll. The triplet chlorophyll produces at a higher rate during the photosynthetic process. Xanthophylls are also found in the body of humans and animals, which comes ultimately by the source of green plants.

Xanthophylls mainly include accessory pigments like lutein, Zeaxanthin and cryptoxanthin. 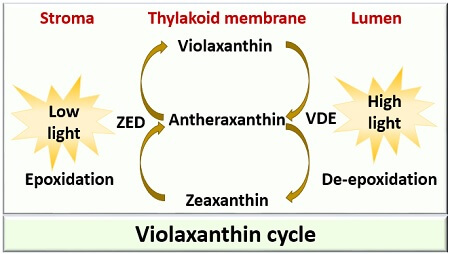 A xanthophyll can be isolated by the method of chromatography. For this, prepare a plant extract by crushing the fresh leaves. Place a drop of leaf extract at one end (above 1 cm) on chromatography paper (considered as a stationary phase). Then, take acetone ligroin mixture as a non-polar hydrophobic solvent (considered as a mobile phase), which will run through the filter paper.

The separation and the travelling distance of plant pigment are based on their solubility with the solvent used. The different plant pigments like chlorophyll, xanthophyll and carotene will travel at different rates and appear as different bands. Chlorophyll being highly polar, it will adhere to the polar surface of the paper. 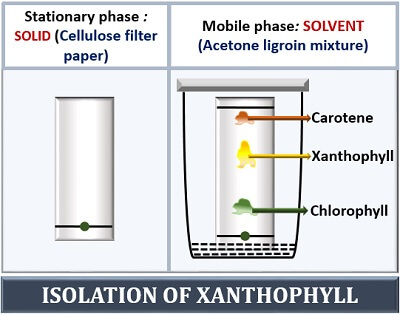