Lac-operon is a system that involves the regulation of protein synthesis or the synthesis of enzymes by a set of genes. This concept can be well studied by the gene expression in prokaryotes like E.coli and other bacteria. The concept of Lac-operon was first explained by Jacob and Monad in E.coli.

Lac-operon refers to the system that can regulate the metabolism or utilization of lactose (as the sole carbon source). In E.coli, a lac-operon contains a gene sequence that controls the gene expression by switching on and switching off the system.

Lac repressor and catabolite activator protein (CAT) are the two gene proteins in which the former functions as a lactose sensor and the latter acts as a glucose sensor. Therefore, the lac-repressor and CAT are the two main components of the Lac-operon.

Lac repressor generally blocks the gene transcription but expresses itself in the presence of inducer molecules, i.e. lactose. CAT activates the gene transcription only at low glucose levels through the hunger-sensing molecule, i.e. cAMP (cyclic adenosine monophosphate). In this context, we will briefly study the concept, structure, components and regulation of the Lac-operon system.

It is a system of DNA containing a sequence of genetic codes or carries a sequence of genes that code the m-RNA and direct the synthesis of enzymes for protein synthesis. An operon is a coordinated system in which all the genes coordinate to mediate the regulation of gene expression.

An operon primarily consists of two elements or genes:

It includes the following regions:

These are the regions of DNA, which contain genes for protein synthesis, and they are of three kinds:

These three, i.e. Lac Z, Y and A genes, are present adjacent to each other. Therefore, all the elements like promotor, operator, repressor and structural genes together form a unit called Operon.

Control of Gene Expression in Prokaryotes

In prokaryotes, the Lac-operon system is controlled in two ways:

It is also called a Positive inducible system and includes the following steps:

This concept is known as the switch on of Lac-operon (by the presence of an inducer). 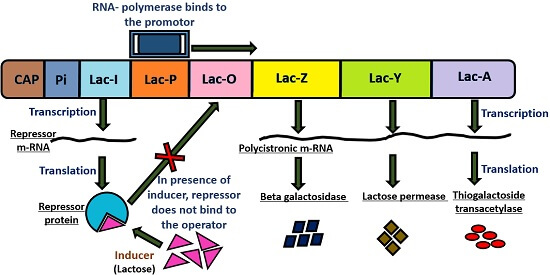 It is also called Negative control of the repressor system. It includes the following steps:

This concept is known as the switch off of Lac-operon (by the absence of an inducer).

It is also termed an Antirepressor. It suppresses the activity and binding of the repressor protein to the operator and makes it an inactive repressor from the active repressor. A lactose or allolactose functions as an inducer in Lac-operon. Allolactose forms by the enzyme beta-galactosidase as a result of the isomerization of lactose, i.e. galactose links to the C6  instead of  C4. It is a kind of complementary substance that participates in switching on and off the operon system.