Meristem culture particularly involves the cultivation of the shoot apical meristem. This technique is also called a shoot tip or apical meristem culture. It was reported in the year 1952 by the scientist’s named Morel and Martin. Orchid cymbidium was micropropagated using this culture by Morel in 1965.

The meristem culture is very much similar to the technique of micropropagation, which also involves:

For the regeneration of plant, Murashige and Skoog’s (MS) medium is prevalently used with low salt concentration for the majority of the species. Fungicides (Bavistin) or antibiotics (chloramphenicol or streptomycin) is also used to remove endophytic contamination. You will get to know the definition, process, uses, advantages, and limitations of the meristem culture method in this context.

Meristem culture is defined as the tissue culture technique, which uses apical meristem with 1-3 leaf primordia to prepare clones of a plant by the vegetative propagation. This technique primarily involves the isolation of meristem by applying a V-Shape cut in the stem. By the culturing of shoot meristem, adventitious roots can be regenerated in this method. The shoot tip’s preferable size is 10 mm for the generation of the virus-free plant, but the shoot tip’s size does not matter in vegetative propagation.

Meristem is a part of the plant, which plays a key function to increase the plant length. It possesses meristematic cells that are continuous, oval, polygonal and rectangle in shape. There is no intercellular space between the meristematic cells. 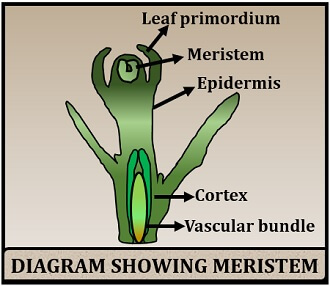 Meristem is the shoot tip, which is found at the shoot apical and root apical region. It is dome-shaped, which is about 0.1 mm wide and 0.25-0.3 mm long. The apical shoot meristem is the portion where a stem elongates and is free of pathogens proved in 1949 before introducing meristem culture.

Limmaset and Cornuet were the two scientists who observed the declined growth of virus towards the apical meristem. Thus, meristem culture is prevalent among other techniques in producing plants free from virus and other related organisms. 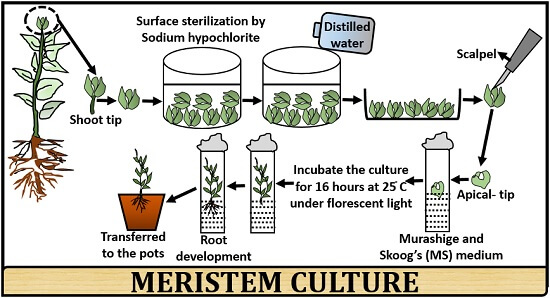