Mucor is a mould or a type of fungi, that is found everywhere. There are many species of Mucor (around 50) that are distributed worldwide. It can cause diseases particularly called mucormycosis that might affect the mucous membrane, lungs, eyes, skin etc. Mucor species are fast-growing fungi, which have a highly developed mycelium and branched hyphae. The hyphae in Mucor are generally coenocytic, but septa may appear in the mature hyphae. The cytoplasm of the hypha appears granular.

Habitat: Mucor lives in a habitat like organic soil, a dead decaying matter of fruits, vegetables and plants.
Distribution: Cosmopolitan.

Some common characteristics of Mucor include: 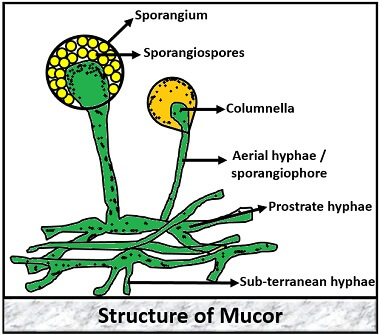 It has three modes of reproduction in its lifecycle:

It occurs by the fragmentation method, where a vegetative cell breaks into several fragments during some unfavourable conditions. After which, each fragment then develops into a new vegetative body.

It occurs through the asexual and non-motile spores like:

These are the spores that form within the cell or sporangium and are non-motile. There are following steps involved in the asexual reproduction of Mucor through sporangiospores: 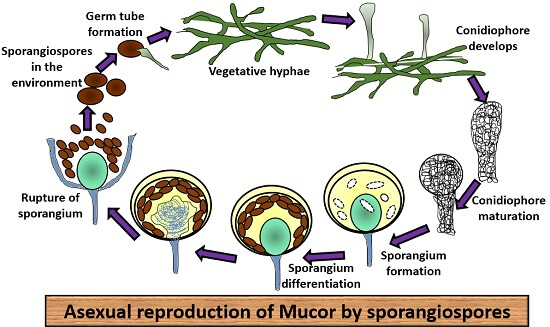 When a mycelium grows in a substrate (rich in sugar), some small, thin-walled and pearl-like reproductive structures form that detaches out of the vegetative cell as in budding of yeast. Then oidospores remain dormant for some time and on favourable conditions, it forms a germination tube to form a new vegetative body. 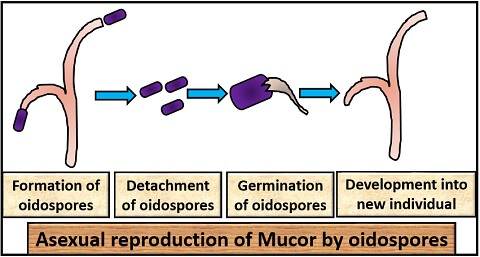 In Mucor, the sexual reproduction occurs by the method that is called as Gametangial conjugation, which involves the following steps: 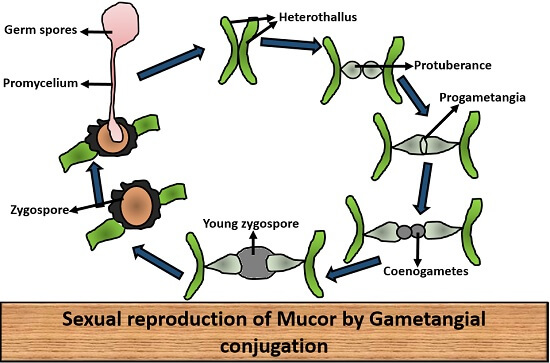 Through these three reproductive methods, a Mucor completes its reproductive phase, and it can cause some serial infections or diseases that can affect the ecological system and human health.