A Bacteriophage possesses viral proteins, which can disrupt their host cell, i.e. Bacteria. It first attaches to the susceptible bacterial cell and injects its genetic material into the host cell. The viral genome within the host cell takes over the cell machinery and uses the bacterial components to release viral proteins.

Eventually, the viral proteins assemble to form virus particles that release out of the host cell by causing cell lysis. In some cases, the viral genome remains integrated with the bacterial genome. Bacteriophage was first studied by F.W. Twort (1915). Later the term bacteriophage was given by Felix de Herelle (1917).

After that, he found that the bacteriophage is useful for the patient suffering from dysentery caused by Bacillus dysenteriae and introduced Phage therapy. In this context, we will talk over the classification, features, morphology and life cycle of the bacteriophage.

If we break the term bacteriophage, we can remember the meaning, viz. Bacterio means bacteria and Phage means invaders or eaters. Therefore, a bacteriophage can define as a virus, which invades the bacterial cell machinery. Bacteriophages show a parasitic relationship with its host cell, i.e. bacteria. It not only infects the host (bacteria) but also controls the machinery of the host. These are ubiquitous in nature.

Based on genome and morphology, the bacteriophages are classified by ICTV (International Committee on Taxonomy of Viruses).
Based on the genome: Bacteriophage can be classified into the following four types:

The morphology of bacteriophage includes the following components: 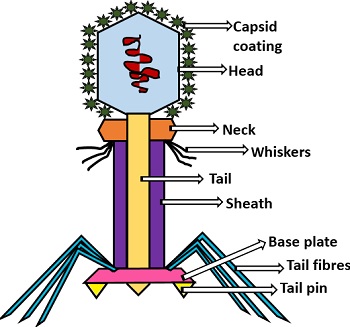 Lytic and lysogenic cycles are the common phases of the bacteriophage life cycle.

It is also called Virulent or Infectious cycle. It includes the lytic phages. The phages of a lytic cycle can infect or kill the host cell, due to which the cycle is known as a virulent phase. It includes the following steps:

Attachment: In this step, a tail pin or spike recognizes the receptor sites on the host bacterial cell and attaches to it. After that, the tail fibres of the bacteriophage attaches to the surface of the bacteria.

Adsorption: In this step, the amino groups of the host cell reacts with the carboxyl group of the bacterial cell and vice versa. After the reaction, the tail fibres secrete a lytic enzyme. This enzyme creates a hole in the host cell through which a viral genome moves into the host cell cytoplasm. 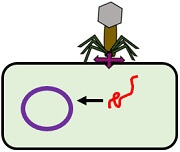 Replication or biosynthesis: After the penetration, the mRNA moves out of the nucleus to the cytoplasm, and the viral genome degrades the host genetic material. Then mRNA transcribes and translates to form protein capsid, which leads to the biosynthesis of other components.

Assembly: It also refers as “Maturation”. At this stage, all the components of bacteriophage assemble to produce new daughter or progeny virions.

Lysis: At this stage, the virus kills the bacterial cell by cell lysis and releases about 100-200 progeny virions.

It is also termed as a Temperate or Non-infectious cycle. The phages that participate in this cycle are known as “Lysogenic phage”. These phages do not kill or infect the bacterial cell, due to which a lysogenic phase is considered as a non-infectious phase. It includes the following steps:

Attachment: In this step, lysogenic phage first recognizes the receptors site of the host through their spikes. After recognition, tail fibres attach onto the host cell surface.

Penetration: It is also the same as the lytic phase, in which the tail fibres release a lysogenic enzyme to create a pore through which a viral genome goes into the cytoplasm of the host cell. 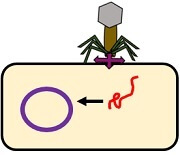 This step is simply the recombination of phage and the host’s genetic material, which does not involve the transcription and translation processes.

Replication: During favourable conditions, prophage replicates when the bacterial genome replicates and pass onto the daughter cells.

Cell division: In this stage, a cell divides into two identical daughter cells.

Induction: It has two conditions:

Therefore, a bacteriophage shows a wide range of ecological, molecular and biomedical significance.