Stomata in plants appear as minute pores, primarily in the epidermis layer of the leaf surface and rarely in some of the herbaceous stems. It was originated from the Greek word stoma (means mouth) to relate it with the term “stomatal pore”. A stoma is a singular form, whereas a high number of stoma is termed stomata (a plural form).

Stomata are prevalently seen in vascular plants. In this context, we will discuss the meaning structure, number, types, opening-closing mechanisms and functions of the stomata.

A stoma refers to a tiny aperture generally found in the epidermis layer of the leaves. The number of stomata varies among plants of different species. In the adaxial leaf surface, the number of stomata is usually less in quantity and more confined to the leaf’s abaxial surface. Stoma resembles the mouth, whose opening and closing is mediated by the guard cells. We could take a reference of guard cell with the lips, as it surrounds the stoma.

One more specialized or modified epidermal cell is adjacent to the guard cell called subsidiary or accessory cells. In plants, stomata are present prevalently in the leaves and rarely in stems, fruits, stamens, petals and gynoecia. A root system lacks the presence of stomata.

Stomata contribute to 1-2% of the leaf area when it is open. It includes the following structural characteristics: 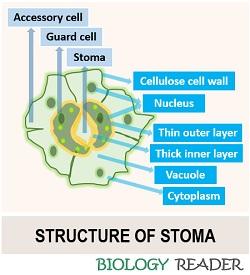 Types of Stomata in Plants

It can be classified into different types based on their location, structure and development.

Based on Stomata Location

There are four types of stomata, depending on the stomata location. 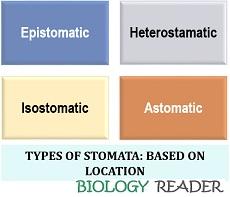 Depending upon Stomatal Development

There are three types of stomata based on the kind of development. 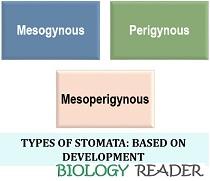 Based on the Stomata Structure

There are seven types of stomata based on their structure. 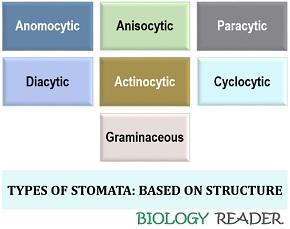 Opening and Closing of Stomata 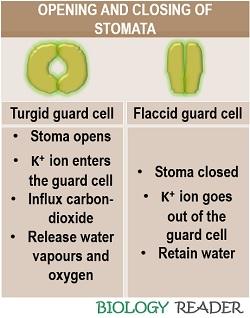 Functions of Stomata in Plants

Stoma opens during the daytime when photosynthesis occurs in the presence of sunlight. As we need fuel to cook food, plants harness carbon dioxide as fuel to prepare food for themselves. Therefore, stomata play an essential role in the process of photosynthesis.

Stoma opens or closes as per its water need. On dehydration of the plant cells, a stoma closes to retain water. But, the plants excessive water in the form of water vapours and oxygen through stomata during transpiration.

In this way, the stoma functions to maintain the cell turgidity by maintaining the water potential. In addition, the stomata allow atmospheric carbon dioxide to enter the plant cells necessary for photosynthesis and thereby providing strength to the plant cells.