Ozone depletion is the process of destruction of the ozone layer in the stratospheric region. It can adversely affect various living forms. Ozone depletes by the many pollutants that are emitting out from the vehicles, industries etc. Ozone layer depletion is one of the major environmental issues, which needs to be controlled as the layer is getting thinner day by day due to increased pollution.

Stratospheric ozone safeguards the living forms by absorbing the most damaging UV-B type rays that can cause skin allergies and eye damage. Oppositely, the ozone in the troposphere is considered bad, as it constitutes the primary source of greenhouse gases that can cause respiratory illness.

Before understanding the whole phenomena of ozone depletion, we will cover all the important terms and facts of ozone, the ozone layer and an ozone hole. Last but not least, we will talk over the causes, effects on the living systems and management of the ozone depletion.

Here, we will briefly discuss the general, physical and chemical properties that will give us the whole idea about ozone:

An O3 is continuously generated and dissociated in the stratosphere, and the phenomena is known as “Chapman cycle”.
Formation of ozone: It involves the following steps:

Dissociation of ozone: It involves the following steps:

It is also called “Ozonosphere”. The ozone layer is a thin layer that acts as a protecting shield by absorbing harmful UV- radiations. It is situated in the lower portion of the stratosphere region. The ozone layer is present about 20-30km above the earth surface. It absorbs up to 97-99% of UV-light less than the wavelength of 290 nm and has a concentration of about 300-350 D.O.

The level of ozone is measured by the Dobson unit that is named after the scientist G.M.B. Dobson. He first devised the instrument, which he named “Dobson meter” (a simple spectrophotometer) to know the amount of ozone that overheads from the ground. The thickness of the ozone varies, but generally;

It is the non-ionizing radiation and a part of electromagnetic rays, whose wavelength ranges from 100-400nm. UV radiation produces naturally by the sun in the form of solar energy. It can also be produced artificially by the mercury and tanning lamp.

It was first discovered by Johann Wilhelm Ritter in the year 1801. The UV radiation is present between the X-rays and Visible light. UV-light has wavelength more than X-ray but less than the visible light.

Classification: UV light categorizes into three types, depending upon its penetration property: 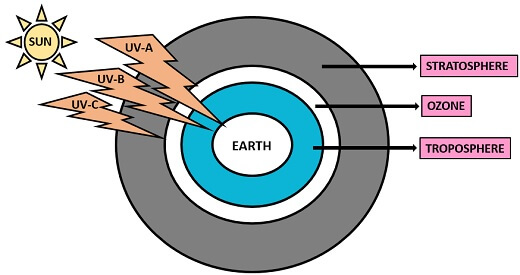 It was first seen in Antarctica continent in the year 1987. During that year, the ozone hole was observed between 12-24 km altitudes. Later, it was investigated that the occurrence of ozone hole occurs annually during mid of august and september in the Antarctic continent. The major factors involved in the cause of ozone hole was not known but it was predicted that chlorine and its radicals deplete ozone.

Mario Molina and Sherwood Rowland first concluded that the stratosphere has a limited power to absorb chlorine molecules. On further study, it was confirmed that the CFCs in aerosols and refrigerants were the primary cause of ozone depletion, in which one chlorine atom may disrupt thousands of ozone molecules.

Nitrogen system: It causes 60% of ozone destruction.
Example: Nitrogen system can be explained by taking an example of nitrous oxide (N2O). Soil and ocean form nitrous oxide that first enters the atmosphere by the microbial activities and then to the stratosphere.

Hydrogen system: It causes 10% of ozone destruction.
Example: It can be explained by taking an example of hydroxyl (OH) group that is derived from the water molecule.

Chlorine systems: It causes about 15-20% of ozone destruction.
Example: It can be explained by taking the example of CFCs.

Other systems: Halons are some other compounds that can also deplete ozone. It primarily includes chemical compounds that are widely used in the fire extinguishers.
Examples: Bromoflourocarbons, Bromochloroflouro carbons etc. 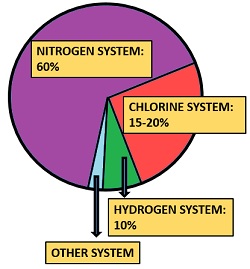 It is a matter of concern that can cause detrimental effects to the living organisms. Let us take a quick view into the effects of ozone depletion on humans, plants and aquatic systems.

Effects on human health: Thinning of ozone can cause skin and eye damage in humans like:

Effects on plants: The depletion of ozone affects the growth and development of the plant such as:

The management of ozone depletion includes the following measures:

Depletion of ozone is a serious environmental issue and it drastically increases by the increased concentration of the environmental pollutants like nitrogen and chlorine radicals. As a result, the ground-level gaseous pollutants deplete the ozone concentration in the stratosphere. Some major steps should be taken to minimize or control the thinning of this protective layer.