Ovary culture is the in-vitro technique carried outside, i.e. on a suitable nutrient medium to grow new haploid plants by taking an unpollinated flower. The ovary culture process is called gynogenesis because an ovary is a female reproductive part called gynoecium.

Ovary culture is defined as the in-vitro culturing method, which makes the use of ovaries that are excised from the pollinated or un-pollinated flowers aseptically and allowed to culture in an appropriate nutrient medium under controlled conditions. It produces haploid plantlets by fertilising an egg-cell or megaspore either through embryogenesis or regeneration from callus.

An ovary is a floral part, which typically represents the female reproductive part and also called gynoecium.  It is one of the components of carpel that we can see in the image given below. Carpel includes a long style, terminal stigma and ovule within the ovary. 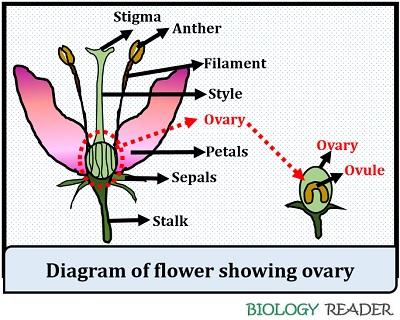 Style and Stigma: The ovary is the basal body from which a long and slender tube, i.e. style originates, and a stigma is terminally present on the style.

Ovule: Within the ovary, an ovule (also called megasporangium) carries megaspore or egg-cell. The integuments of an ovary encase the egg-cell. The egg cell goes through fertilization, after which a zygote forms that later develops into a mature embryo.

The principle of gynogenesis is based on the regeneration principle, in which an ovary can regenerate into a fully differentiated plant. In the ovary culture, the flowers are excised from the plant either in pollinated or non-pollinated stage. Then, the ovary is removed from the flower’s pistil. The ovary possesses an ovule (a female reproductive part of a flower), which can develop haploid plantlets by the growth on nutrient medium under controlled conditions. 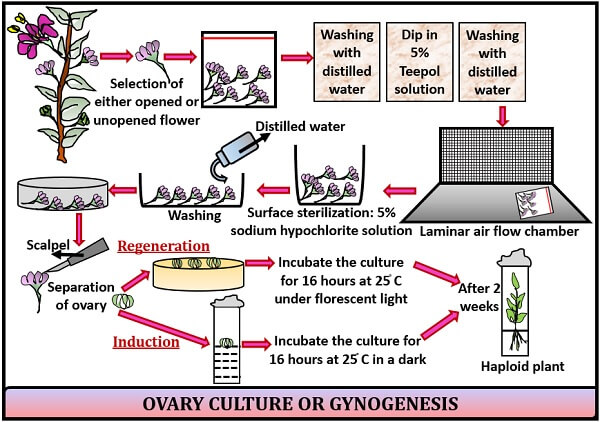 Role of floral organs can be studied, which plays a significant role in fruit development. Gynogenesis also helps in inducing polyembryony, in which many shoots can be developed instead of single plantlet. Ovary culture also explains the in-vitro pollination and seed formation method. An ovary’s culture from the apomictic plant can help us understand the stimulus provided by pollination.

As apomistic plant (fertilization absent) and the pollination alone stimulates the ovary growth and seed development. Ovary culture also helps us understand the hybridization process to obtain hybrid varieties of seedlings by crossing over interspecific and intergenic species.

The frequency of haploid production is very low in ovary culture as only 1-5% of the responding ovaries are there. This technique requires high technical skills and management. Gynogenesis can be employed only in limited species, for example, wheat, rice, maize, sugar beet etc.