Anther culture is a type of tissue culture technique, where a part of a plant (anther) gives rise to an androgenic haploid plant when cultured on a nutrient medium under optimal conditions. The nutrient media provide all the necessary factors that are required for the growth of the cell.

It involves excision of the developing anther from the bud. The microspores of the anthers turn into the callus tissue, which in turn produce haploid plants. In this context, we will discuss the definition, method, procedure and factors influencing the anther culture technique along with its discoveries.

The anther is a part of a flower, which is bilobed and sac-like in structure. In flower, anther is the part of the stamen that is a male reproductive part. Stamen comprises a long, narrow or stalk-like filament which carries the anther at its tip. An anther consists of microsporangia which produce pollen grains by the meiotic cell division. 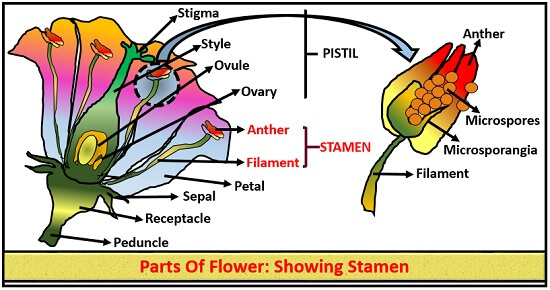 It is a method of Androgenesis, i.e. production of haploid plantlets by the in-vitro condition, in which the anther is separated from the bud aseptically and cultured on the nutrient media to give rise to the haploid plantlets. Its primary objective is to produce haploid androgenic plants by using the regeneration capacity or the totipotency of the anther.

Several discoveries have led to the discovery of producing haploid plantlets by the anther culture. Many scientists have contributed to know more of this technique by their experiments.

Anther culture is a plant tissue culture method, which can be done by either of the two methods, namely direct or indirect method.

There are following steps involved in the anther culture method: 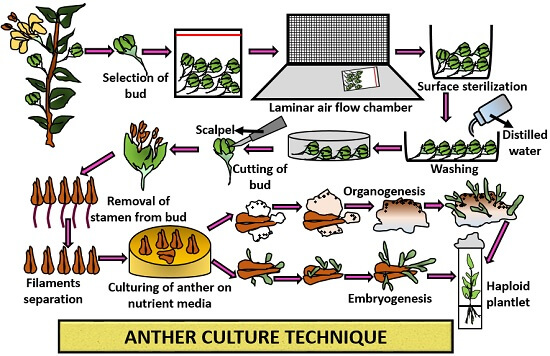 Some factors that influence the anther culture technique can be categorized into intrinsic and extrinsic factors.

Anther wall: It provides nourishment during the developmental stages of the anther.

Age of plant: The anther culture prefers the buds from the younger plants.

Role of activated charcoal: Activated charcoal plays a vital role in the removal of inhibitory substances like both exo and endogenous growth hormones from the culture medium by stimulating anther growth.

Pre-treatment method: The pretreatment of bud is necessary for the production of embryoids. Example: In Nicotiana tabacum, the bud is pretreated at a temperature of 5 ֯ C for 72 hours.