Acetic acid production refers to the production of acetic acid or vinegar through two steps modification via two different microorganisms. The first step involves the conversion of sugar into ethanol by the yeast (mainly Saccharomyces cerevisiae). In the second step, oxidation of ethanol into acetic acid takes place by the bacteria like Acetobacter, Gluconabacter sp. and the process termed as “Acetification”.

In the ancient time, vinegar was naturally produced from the wine opened to the air. This cause spoilage of wine or “Souring of wine”, and the vinegar produced by this natural method is called “sour wine”. In the 19th Century, modern methods like surface and submerged fermentation were introduced for the large scale production of acetic acid.

Technically, a vinegar must contain about 4% of acetic acid per 100ml to call it as “Legal vinegar”. In this context, you will get to know the definition, production process (through a synthetic and biological method), recovery, biosynthesis and uses of the acetic acid.

A biological process initially requires Saccharomyces cerevisiae for the conversion of the sugar-containing substrate (like molasses) into the ethanol and finally makes the use of Acetobacter aceti, which brings about the transformation of ethanol into acetic acid.

What is Acetic Acid?

Acetic acid or “Ethanoic acid” is a weak organic acid. Some of the important properties of acetic acid are mentioned below in the table:

Acetic acid can be produced by the following two methods like:

The biological method is generally employed for the commercial production of acetic acid through microorganisms like yeasts and bacteria. There are two methods, namely surface and submerged fermentation process widely used for the large scale production. 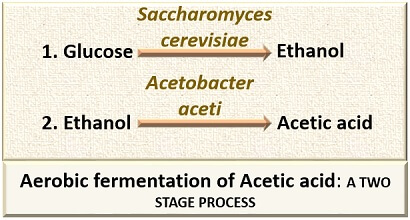 In the case of substrates like malt, whey etc. of low alcohol content, there is no need to add additional nutrients. If substrates like potato, grain spirits are used, then nutrient must be added for the optimal growth of microorganisms and acetic acid production.

It uses trickling generator for the acetic acid production.

Construction of trickling generator: The outer surface of the tank is composed of wood with the carrying capacity of 60m3. The inner surface contains the birch of wood shavings. Below the column of wood shaving, there is a cooling system at the bottom, which controls the heat generation during the process. The collecting chambers collect the liquid and recirculate it to the top for the conversion of ethanol into acetic acid. The acetic acid is drawn off through the outlet. 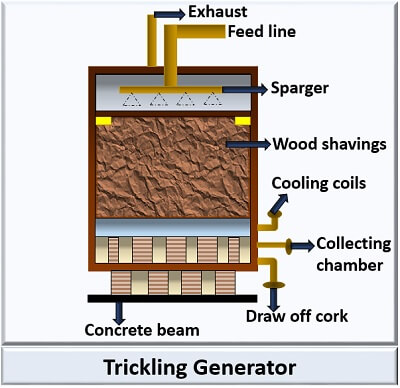 The concentration of ethanol should not be less than 0.2%, as it can increase the death rate of the microorganisms producing acetic acid. Therefore, for the optimum growth of microorganisms and production of vinegar, the concentration of ethanol must be in between 0.2-5.0%. The significant advantage of surface fermentation is that it leaves little residue with a high yield of acetic acid.

In the submerged fermentation, the substrates with low alcohol content like fruits and wines are used in the initial step, under anaerobic conditions. Nowadays, high yielding substrate and productive strains are used to produce 13% of acetic acid, under 50m3 oxygen.

Construction of the submerged fermentor: The submerged fermenter is made up of “Stainless steel”. The effigas turbine, at the bottom, allows continuous agitation. A suction rotor of the fermentor provides aeration. The heat exchange plates control the temperature of the culture medium. There is a foam separator, which eliminates the foam formed in the culture vessel. Through the harvester pump, the acetic acid is taken out.

Process: Firstly, the ethanol is inoculated with the bacterial strain Acetobacter acetigenum. The fermentation is carried out for 35 hours at 40 degrees Celsius. The bacteria then grow and ferment the ethanol to acetic acid through continuous agitation and aeration.

Submerged fermentation gives 10times/m3 higher yield than the surface fermentation and it is a cost-effective method. It requires only 20% of the plant area for the installation of the machine and does not require labour skills because of the automated machines.

In the recovery stage, the fermented product is recovered to obtain pure acetic acid. The acetic acid is produced along with the water and certain by-products like formic acid, bacterial biomass, which must be separated. The separation of heavy particles like bacterial mass can be done either by the method of centrifugation or filtration.

For the filtration method, plate filters are extensively used. After the filtration, the acetic acid is subjected to decolouration by adding of K4 [Fe (CN) 6]. Distillation is also employed for the separation of water and acetic acid.

Therefore, acetic acid is a product formed as a result of partial or incomplete oxidation of ethanol.