The life cycle of adenovirus has different stages like attachment, internalization, uncoating, replication, biosynthesis, assembly and release of viral progenies. After lysing the host cell, they infect new cells and cause infections either for the short term or long term. Adenovirus mainly causes four kinds of infection like a productive, abortive, latent and oncogenic infection.

Later, it infects the preauricular, mesenteric and cervical lymph nodes and sometimes the infection also spreads to the visceral organs. In this context, we will discuss the different stages in the life cycle of adenovirus and its multiplication mechanism and interaction with the host cell.

The life cycle of adenovirus can be summarized in the following stages: 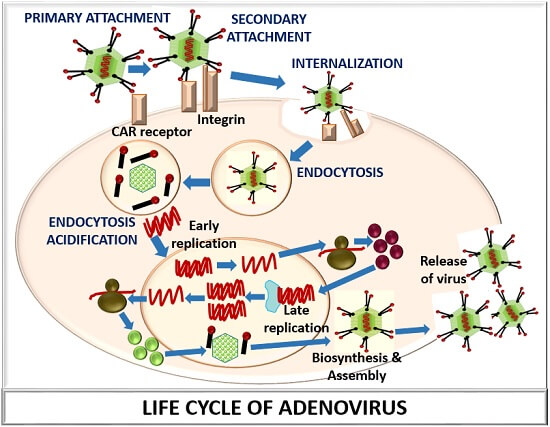 Adenovirus gets attached to the host cell surface by two-stage interactions, namely:

Initial interaction: In this stage, the attachment of penton fibre occurs with the host cell receptor. A knob of the fibre protein attaches with the CAR family’s cell receptors (Coxsackievirus Adenovirus Receptor). CD46 is the most common receptor for all the serotypes of adenovirus. The host cell also possesses receptors like MHC-I, MHC-II molecules and sialic acid residues.

There is a special motif in the adenovirus structure called the “Arginine glycine aspartate motif ”. The configuration of the arginine glycine aspartate motif helps an adenovirus to get internalized into the host cell. The process of internalization is very specific or selective. The αV integrin protein gives a signal for the particular serotype of the virus and results in the induction of actin polymerase to uptake the virus.

Vesicle Formation: When the adenovirus enters the host cell, a vesicle forms around it and called “Endosome”. This is a unique feature, where the whole virus gets into the host cell cytoplasm rather than the genetic material.

The virion gets released from the endosome as a result of endosome acidification. The endosome’s acidification results in a dissociation of the protein particles like fibre and capsid into the cytoplasm. Only the viral DNA moves into the host cell’s nucleus for the process of replication and multiplication.

The viral DNA replicates inside the nucleus. A 55 KD terminal protein acts as a primer and attaches with each 5’ end of the viral ds-DNA. This terminal protein initiates the synthesis of viral DNA. In adenovirus, two kinds of replication mainly occur:

After the adenovirus gene expression or the completion of the mRNA translation, all the virion proteins or particles get assembled. The viral DNA is first packaged into the capsid along with penton fibres, and the process called “Maturation”. The mature viral progenies finally leave the host cell either through budding or cell lysis and later infect other cells. 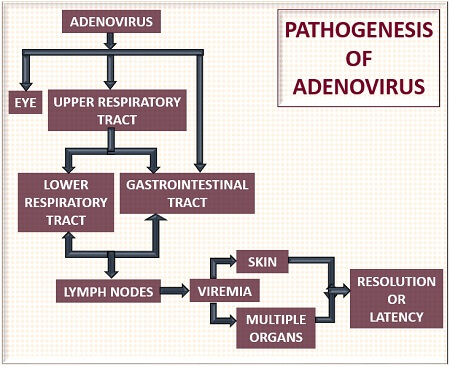 Viral progenies release out of the host cell and mainly produce the following types of infection with the host cell:

It is also called “Lytic infection”. Productive infection can define as the type of infection where the viral genome undergoes complete replication and causes cell death by releasing viral progenies. Symptoms start appearing after a few days of infection.

It can define as a form of infection where the viral genome undergoes incomplete replication. Thus, a virus is unable to produce viral progenies in abortive infection, but the infection remains persistent to the host cell.

One of the unique features of adenovirus is its oncogenic property. Some serotypes like A and B can transform the host cell into the cancerous cell after viral DNA integration.

Some of the adenovirus infections are mild and self-limiting.