The difference between flagella and pili is due to the difference in the properties like structure, origination and functional role. Both are the two common types of surface appendages, which aid in locomotion and attachment of the organisms.

In this context, we will discuss the key differences between the two locomotory appendages (flagella and pili) along with the comparison chart. You will also get to know the definition, structure and some similarities between the two.

Flagella are the locomotary appendages, whose functional role is to provide cell-motility. They appear as a long, spiral and whip-like structures, which protrude outside the cell membrane. The length of the flagellum is nearly 15 µm, and the diameter is about 15 to 20 nm.

Flagella are of three types (based on its occurrence), namely prokaryotic, eukaryotic and archaeal. However, the thickness, number, position and the arrangement of flagella vary from organism to organism. The structure of bacterial flagella possesses three elements, namely basal body, hook and filament. 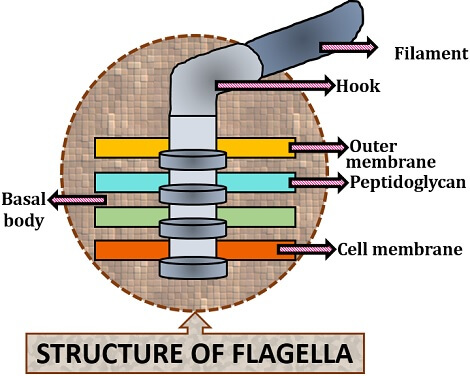 Pili are the locomotary element, which plays a functional role in providing cell mobility, cell attachment and gene transfer. They appear short, straight and hair-like appendages, which protrude outside the cell wall. The length of pili is nearly 0.2 to 20 µm, and the diameter is about 3 to 10 nm. Pili are found on the surface of gram-negative prokaryotes and absent in eukaryotes.

They also differ in thickness, position, arrangement and number from individual to individual species. There are two types of pili, namely conjugative and type-IV pili. Conjugative pili aid gene transfer mechanism through conjugation, whereas type-IV pili help in cell attachment and movement. 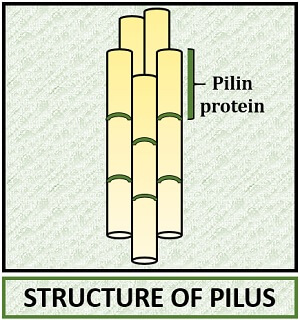 Key Differences Between Flagella and Pili