Bacterial conjugation is a gene transfer mechanism, first introduced by the scientists named Lederberg and Tatum in the year 1946. The conjugation method was first studied in Escherichia coli. The formation of a conjugation tube is the characteristic feature in a conjugation mechanism. Instead of transduction and transformation, some bacteria passes the genetic information from a donor to a recipient cell via the cytoplasmic bridge, what we call as “Conjugation tube”.

The bacterial cells (donor and recipient) come closer to each other and eventually form a bridge refers as pilus or conjugation tube that provides a passage for the transfer of genetic material.

Bacterial conjugation is a process, where a donor cell (having fertility factor) comes in close contact with the recipient cell by forming a protuberance called conjugation tube that passes on the genetic material from one cell to other. In a conjugation process, a donor or F+ cell tends to form a conjugation tube, by the presence of self-transmissible F-plasmid. The F-plasmid stands for fertility plasmid that exists in gram-positive and negative bacterial cells. 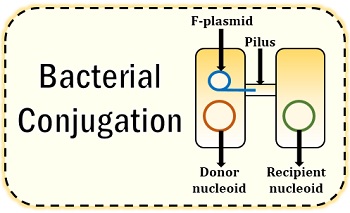 A recipient or F– cell possessing one strand of the F-plasmid from the donor cell refers as “Transconjugant”. The transfer mechanism of conjugation occurs between the known species or intraspecific. Some bacteria possess promiscuous plasmid that allows genetic exchange within the unrelated species.

It also refers as Fertility factor, which is a combination of three elements like:

Loci gene: A fertility plasmid comprises of mainly two loci, namely tra and trb gene. A transacting or tra gene contains the genome DNA that encodes for the proteins that form a channel for the DNA transfer. Trb gene encodes the proteins that are involved in processes like:

OriT: It is an acronym of a term named as Origin of transfer. OriT functions as an active site for the migration of chromosomal DNA from a donor bacterium to a recipient bacterium.

OriV: It is a site for the replication of chromosomal DNA that occurs independently.

The mechanism of conjugation includes the following steps: 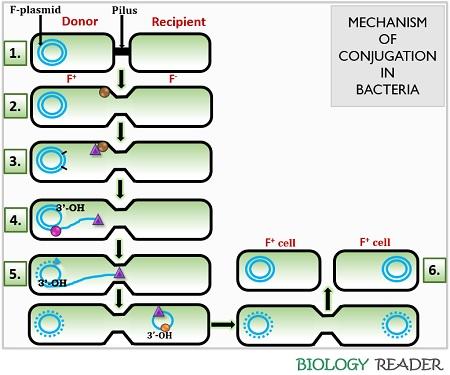 Three ways can accomplish the transfer of genetic material: 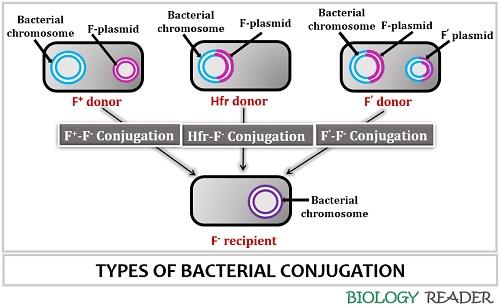 This kind of conjugation occurs between the donor cell having Fertility factor (denoted as F+) and the recipient cell that lacks such factor (indicated as F–). F-plasmid can define as the fertility factor that functions in the expression of pilus, synthesis and exchange of plasmid DNA during mating. The role of fertility factor is controlled by the cluster of 25 tra genes, which can be of two types:

The F-pili of the donor cell initiates the process of mating by first binding with the outer membrane protein of the recipient cell. Eventually, a cytoplasmic bridge appears between the F+ and F– cell, which commonly refers to as conjugation tube or pilus. Through this cytoplasmic bridge, one strand of the F-plasmid is nicked by a relaxase enzyme at the oriT site and then moved to the recipient cell from 5’-3’ prime. 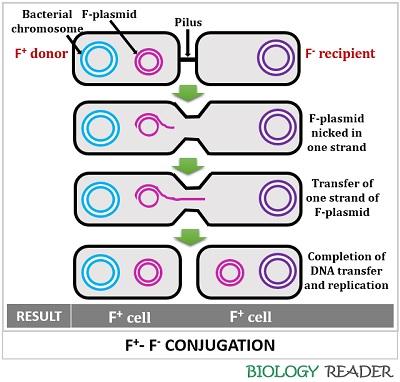 The site where the transfer of plasmid DNA occurs commonly refers to as “oriT”. Thus, a pilus formed between the F+ and F– cell facilitates the transfer of F-plasmid DNA. The single stranded DNA moves into the recipient cell will transform into a circular F-plasmid dsDNA. After the completion of conjugation, both the partners will carry F-plasmid DNA. 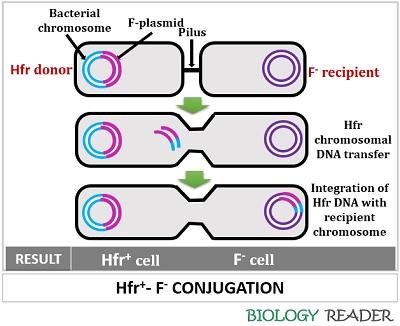 The replicated donor DNA enters the recipient cell and may degrade into fragments or incorporate with the recipient’s nucleoid via recombination. Hfr-F– Conjugation is important regarding the process of gene mapping, where the relative positions of the gene in a bacterial chromosome can be identified.

Mating occurs between F’ and F– strains refers to as F’-F– Conjugation. F’– strain contains excised F-plasmid integrated with the chromosomal DNA of Hfr strain. F– Strain only contains the bacterial nucleoid and functions as a recipient cell.

This kind of conjugation is virtually identical, where the F’ plasmid enters the F’– strain without being incorporated into the recipient’s nucleoid. Therefore, a recipient cell becomes F’– strain and functions as partially diploid merozygote, by carrying F’– plasmid having two sets of genes.