A fungal cell commonly exists in two forms like moulds and yeasts. Fungi are eukaryotic organisms possessing fruiting bodies or spores. Unlike plants, they lack chlorophyll. Moulds are the type of fungus that appears filamentous and multicellular in appearance.

Conversely, yeasts are the fungus-like cells that include Saccharomyces cerevisiae, Sporobolomyces roseus, etc. and seem unicellular in structure. Like animals, fungi exploit organic food from the sources like decomposed matter, different hosts for their growth and development and called chemoorganotrophic organisms.

The science dealing with the study of fungi is called “Mycology“. A thallus refers to the fungal cell body, which can be either unicellular (yeasts) or multicellular (moulds).

Some fungi show dimorphism between the two states by following both yeast and mould cell cycle and called “Dimorphic fungi”. In this context, we will discuss the structure of fungi by looking into the diagram and morphological features of both yeasts and moulds.

A fungal cell possesses a true cell wall (like plant cells), except for myxobacteria or slime moulds. Chitin and glucan contribute to the cell wall of fungi.

The fungal cells possess DNA packed within a membrane-bound nucleus. Fungi may multiply or reproduce via vegetative, asexual and sexual methods.

Fungi are achlorophyllous microorganisms, as they lack chlorophyll, unlike plants. The majority of fungi have filamentous body or hypha that eventually form a network of a branched body called mycelium.

They possess a heterotrophic and absorptive mode of nutrition. Fungi are ubiquitous as saprobes, symbionts, parasites or hyperparasites and have a cosmopolitan distribution.

Like bacteria, fungi also decompose the dead organic and inorganic materials into simple forms or participate in the nutrient-cycling.

Fungal cells are typically eukaryotic. Let us discuss each of the structural components of a fungal cell.

A fungal cell wall composition varies among different species and groups. The cell wall of the Zygomycetes and higher fungi (Ascomycetes and Basidiomycetes) predominantly consist of chitin.

Fungus chitin (C22 H54 N21)n is a polysaccharide, depending on the nitrogen-containing sugar. Chitin forms the microfibrillar units or layers that contribute to the structural integrity of fungal cell walls.

Thus, the chief chemical constituents of fungal cells include polysaccharides and some amounts of proteins and lipids. Oppositely, lower fungi predominantly possess glucan and cellulose in their cell wall.

The plasma membrane, plasmolemma or cell membrane encloses the inner protoplast of the fungal cells. It appears extremely thin and functions as a living membrane. Moore and Mc Lear named it lomasome. The fungal cell membrane serves as a surface layer of protoplast that is differentially permeable.

It exhibits a typical tripartite structure that contains two electron-dense regions within which a transport region is present. Each layer measures 25-30A. The proteins and lipids constitute the main components of a cell membrane.

The fungal plasma membrane is quite different from the plant and animal cell membrane as it typically contains ergosterol as the main membrane sterol. Oppositely, animals and plant cells have cholesterol and phytosterols, respectively.

Fungal cells being eukaryotic, possess a true or well-developed nucleus. Under the microscope, it appears as an amorphous or granular mass. A nuclear membrane encloses the nucleus.

Numerous pores or annuli appear on the surface of the nuclear membrane, which may be circular or hexagonal. The nuclear pore facilitates the nucleocytoplasmic exchange. The nucleolus is the dense central area possessing RNA.

It varies in shape and size and presents more abundantly in the sub-apical region. A double membrane encloses the small and spherical bodies called mitochondria.

The inner membrane is infolded to form the cristae. There are a few cristae in fungal mitochondria that appears flattened and more irregular.

The majority of fungi have a highly vesicular endoplasmic reticulum. It originates from the nuclear membrane and commonly found in young hypha of moulds.

Young fungal cells lack vacuoles while present within the cytoplasm of the old fungal cells. With age, they enlarge and provide turger needed for cell growth and cell shape.

The living protoplast comprises different kinds of inclusions. Glycogen granules and lipid globules are the chief storage products that prevalently reside within the mature fungal cells.

Yeasts multiply their number by budding or forming a small outgrowth near the bud site. The bud progressively elongates and attains maturity, and eventually, the migration of the nucleus occurs from the parent cell towards the bud site. 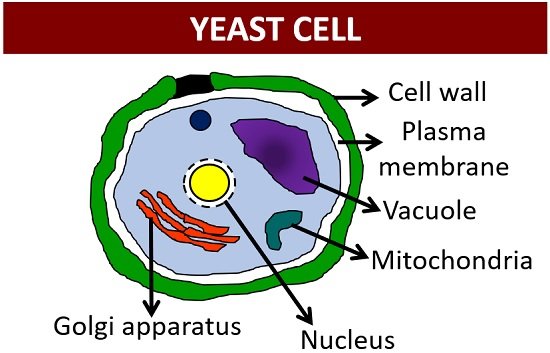 As the cells divide, one nucleus remains in the mother cell and a second nucleus enters the daughter cell. Finally, a septum separates the bud from the yeast cell. The bud detachment site or bud scar can be easily observed by staining the cell wall using fluorescent dyes.

The length and diameter of hyphae vary in different fungal species. The growth occurs at the tip of the hypha, called the extension zone. The thallus or fungal body is differentiated into two distinct parts (vegetative and reproductive part).

The vegetative part or hypha possess finger-like projections or haustoria that perform absorptive functions. Conversely, the reproductive hypha constitutes the fruiting bodies or fungal spores. A fine network of hyphae is called mycelium.

The hypha expands and breaks down due to autolytic enzymes. Fungi may have septate or aseptate hyphae. The presence of cross walls or septa is a common feature of filamentous fungi.

However, the oomycetes and zygomycetes have aseptate hypha. A septum grows centripetally from the lateral hyphal wall. The cell wall and plasma membrane are closely attached, which protects the cytosolic contents of the fungal hypha.