Integuments in plants are the maternal tissues or having a maternal origin, as they originate from the ovular tissue or chalazal tissue (a part of the female reproductive system of a flower). A term integument merely refers to the protective layer. In terms of botany, an integument is a layer encircling the ovule. After the fertilization event, it transforms into testa that encases the seed or ovule.

An integument is in the form of seed coat or testa in plants, whereas skin, hairs, nails etc. are the parts of the integument. Therefore, the primary function of an integument is to safeguard the internal cells or tissues.

Besides, the integuments in plants also perform some other functions like seed development by providing nutrition to the developing embryo, seed dormancy by preventing radicle protrusion and the entry of water.

Here, we will discuss the definition, types and functions of the integument along with the comparison between the integuments in the seed plants (both angiosperm and gymnosperm).

In terms of botany, an integument can define as the outer envelope, which surrounds or protects the nucellus and the megasporocyte from the environmental, physiological and chemical changes. A combination of nucellus plus integument is known as ovule. An integument in plants has a function similar to the human skin, which protects the internal cells, tissues and organ.

The plants during fertilization go through many changes, which may cause harm to the developing embryo sac within the ovary. Therefore, integuments that are surrounding the ovule will protect it from the external damages.

Besides, it also maintains a favourable environment for the growth of megasporangium or ovule by facilitating the continuous supply of plant nutrients to the ovule through a tube called a micropyle. A placenta is found continuous with the micropyle, which nourishes the developing embryo sac.

An integument can generally be of three types, depending upon its number that encases an embryo sac of the ovary. Unitegmic, bitegmic and ategmic are the three common types of integuments found in the ovary.

The plants that are belonging to the group of angiosperms have two integuments, or they are bitegmic. The angiosperms possess an inner and outer integument within the ovary of a flower. An inner integument shows resemblance with the single integument of the gymnosperms, and it is generally composed of sclerenchyma tissues, termed as inner sclerotesta.

Oppositely, an outer integument primarily comprises of the parenchymatous tissues and also called as outer sarcosta. Both the inner and outer integument of the angiospermic flowers form a micropyle. Thus, the integument of angiosperms is perforated, as it creates a channel (micropyle) that helps the pollen tube in reaching the embryo sac to one of the synergids, after pollination. 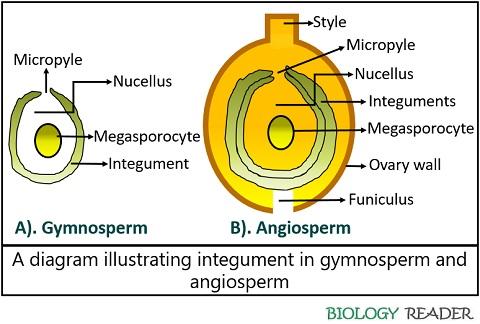 The plants that are belonging to the group of gymnosperms mainly possess one integument around an ovule, or they are unitegmic. Gymnosperms are sporophytes bearing sporangia on the plated-like structure called as sporophylls.

The gymnosperms have a naked ovule, which indicates the absence of ovary. The pollen grains can fall directly through a perforation in the integument, i.e. a micropyle. Within the ovule, a pollen grain germinates and delivers two of its sperm cells.

In gymnosperms: There is a single layer of integument around the female gametophyte of gymnosperms. After fertilization, the integument develops into a seed coat, which protects the ovule, i.e. seed and a zygote, i.e. an embryo from the external and internal stresses.

Therefore, the integument that encases an ovule generally performs the following functions, which are mentioned below: 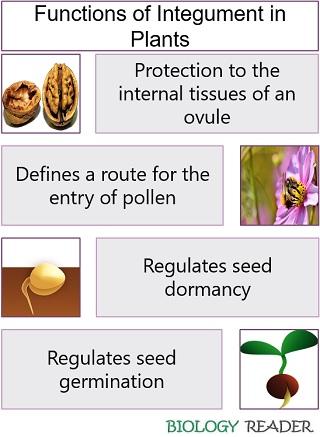 Protection: A protective layer of integument functions as a shield for the internal tissues of the ovule against the mechanical, chemical and biological damages.

Seed hydration: As integuments develop into a seed coat or testa, it acts as a primary means of water uptake from the surrounding to the seed.

Dormancy of seed: The integuments maintain a proper dehydrated dormant state of the seed until the favourable conditions for the seed germination do not exist. A seed coat through its germination restrictive and mechanical resistance action prevent the entry of water and radicle protrusion, respectively.

Seed imbibition: During this state, an integument or seed coat provides a gelatinous material around the seed so that a seed can imbibe water from it to germinate. Seed germination is characterized by the development of the radicle tip.

Therefore, we can conclude that the integuments are the maternal structures originated from the chalazal tissue of the female reproductive organ, i.e. gynoecium. After fertilization, the outer and inner integument in angiosperms will transform into testa (seed coat) and tegmen of the seed, respectively. But, the integument in case of gymnosperms will only form a testa or seed coat.