Do you know how ferns reproduce? Well, ferns are seedless, flowerless vascular plants. But, they can undergo both asexual and sexual modes of reproduction. The majority of ferns undergo sexual reproduction through spores.

If you look underside the ferns leaf, you will find a row of small spots, called sori. Such spots are visible in spring and summer. Each spot encases tiny spores that shed off in the late summer.

It is the time when spores find a suitable damp spot to germinate. First, a small gametophyte develops from the spore containing half the genetic code. Further growth leads to the development of the sporophyte plant.

The fern sporophyte contains spores having a complete genetic code. Thus, ferns reproduce sexually via spores even though flowers are absent. Some ferns may reproduce via asexual means as well.

Apogamy, the proliferation of baby ferns and rhizome proliferation are the asexual methods. In this post, we will discuss the meaning and characteristics of ferns. Also, we will study different modes of fern reproduction in detail.

Ferns are seedless and non-flowering vascular plants. They constitute the most diversified group of primitive vascular plants. Most of them live in humid tropics and temperate regions. Some also live under sub-arctic conditions.

These three components are the basis of ferns classification and identification. 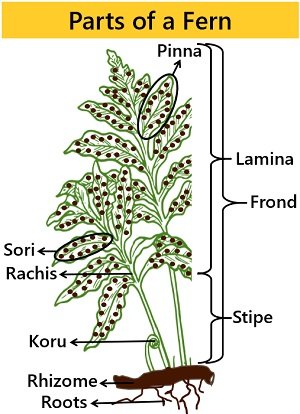 Ferns have a rhizome (a modified stem) that exists in three basic forms:

The fronds are the fern leaves, which can be simple and undivided. A stalk or stipe holds the leaflets with a flat blade (the lamina). Lamina possesses variable pinnae. 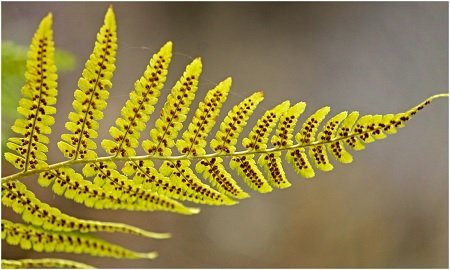 They encase the spores and appear underside of fronds. Not all the fronds carry sporangia (hold spores) underneath their surface. Only fertile fronds have sporangia.

In the majority of ferns, sporangia cluster into sori. These exist as brown, black or orange spots. In some ferns, the indusium is a membrane protecting sporangia.

Sporangia are sometimes exposed to air. When the sporangia break open, they release spores into the environment.

The sexual life cycle of the fern occurs via spores. It has an alternation of generations. Also, an embryo stage is present.

When the fern sporophyte matures, spores release out of the sporangia. Spores are rusty-looking present underside the tips of the fern leaves. These spores disperse through wind, water or air current. Later, spores fall onto different substratum.

In favourable conditions, the spore germinates and develop the fern gametophyte. During this stage, male and female sex organs develop, and fertilization occurs.

After fertilization, the zygote develops into an embryo. After successive division, the embryo turns into a sporophyte plant. On maturation, true leaves of sporophyte produce sporangia. These encase spores on the frond’s dorsal surface.

Sporangium matures, and the spores release into the environment under unfavourable conditions. Thus, the germination of each spore gives rise to the sporophyte. Let us summarise the steps involved in the fern’s sexual life cycle.

Step-1: The fern sporophyte discharges spores in the summer. Then, the released spore must land on the suitable substratum to grow and germinate. Spores germinate best in moist places.

Step-2: Spores germinate into the flat, thin and heart-shaped gametophyte plant in favourable conditions. They are green and photosynthetic. They resemble the gametophytes of several liverworts.

Step-3: Rhizoids project out from the lower surface of the gametophyte. The fern gametophyte holds both male and female sex organs.

Step-4: As the sperm matures within the antheridia, they release out. For this, sperms need water passage or film to swim towards the mouth of antheridia.

Step-6: The body of sperm consists of nuclear material. A band of cilia is also present around the sperm body for locomotion. The sperm fuses with a single egg, resulting in zygote formation. After fertilization, the neck of the archegonium closes.

Step-1: Then, the zygote divides and differentiates into the embryo within the archegonial venter. The embryo remains confined in the gametophyte.

Step-3: In later stages, subterranean stems or rhizomes originate. These appear thread-like and creep upon or beneath the ground. When the fern sporophyte matures, true roots arise from rhizomes.

They appear thin or wiry and absorb soil water and nutrients. Rhizomes bear leaves or fronds. They appear feather-like with smaller side branches. The immature leaves have coiled or circinate vernation.

Later, each spore gives rise to the photosynthetic prothallus (gametophyte) via mitosis. It maintains the number of haploid chromosomes within the prothallus. In this way, the ferns undergo two generations to complete their life cycle.

It involves the development of gametophyte from the sporophyte without fertilization. Ferns undergo apogamy due to the following reasons: 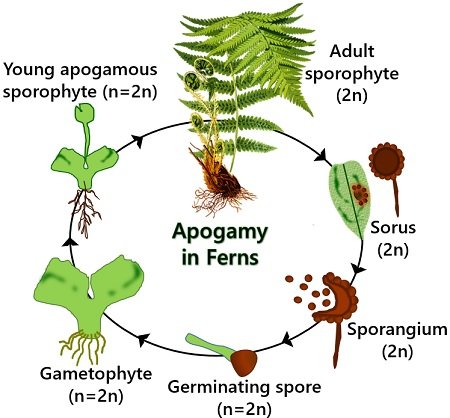 Thus, apogamy occurs when the surrounding conditions do not favour fertilization.

Some ferns develop baby ferns at proliferous frond tips. It is a quick method of asexual reproduction. Here, the growth of baby fern results in drooping of frond towards the ground.

Then, the baby fern roots itself. As a result, it grows independent from the parent plant. But, the number of genes in the proliferous baby plant is equal to its parent.

It is another method of quick asexual reproduction in ferns. Some ferns undergo reproduction through rhizomes proliferation.

The rhizomes are the fibrous structures that resemble roots. But, they are modified stems that can spread through soil, sprouting new ferns. Also, the new ferns are identical to their parents in this method.

Thus, ferns reproduce via sexual or asexual methods. And they have different adaptations to undergo reproduction. In sexual reproduction, a haploid spore develops into a haploid gametophyte. Under enough moisture supply, the fertilization of gametophytes occurs.

After that, the haploid gametophyte matures into a diploid sporophyte. Later, the sporophyte produces spores, completing the life cycle. Asexual methods of fern reproduction include apogamy, proliferous frond tips, and rhizome proliferation.