Late blight in the potato is a plant disease caused by the pathogenic fungus Phytophthora infestans. It is a potentially devastating disease that primarily affects potato crops but can also be seen in the members of the Solanaceae family, including tomatoes, petunias and hairy nightshades.

Phytophthora infestans is a plant pathogen, which can severely affect the yield and quality of potatoes by infecting the foliage, stems and potatoes at any stage of crop production.

This post describes the effects, favourable factors, and mode of action of the pathogen responsible for potato blight. In addition, you will get to know the symptoms, disease cycle and the control measures of the late blight in potatoes.

P. infestans is a coenocytic oomycete or water mould. It acts like an obligate parasite that requires a living host and invades the host cell. P. infestans spreads intracellularly through its slender and unbranched haustoria.

Primary sources of inoculum include the infected seeds or potatoes kept in storage and culled or volunteer potatoes. The sterilization temperature for P. infestans is 120 °F for a time limit of half an hour. P. infestans has a worldwide distribution.

Phytophthora infestans can cause severe damage to potato crops by affecting the following:

The infection by the Phytophthora infestans is favoured by the following factors necessary for the pathogen to cause infection and disease development:

Phytophthora infestans predominantly attack plant foliage. We can see blisters or lesions on leaves as small dead spots with varying colours (brown to purple-black) during this stage.

Besides the plant foliage (including veinlets and margins), the infection also spreads to the areas like rachis, petiole and stem. When the pathogen gets favourable conditions, lesions proliferate, and the infection spreads upward from the lower leaves and petioles.

Then, the plant foliage acquires rapid blistering. The foliage becomes shrivelled in dry climatic conditions, whereas leaves become dead and give a foul smell in moist conditions.

Symptoms of Late Blight of Potato

If no one follows control measures for the disease management, then the whole field may be affected that may emit an offensive odour.

Generally, the asexual phase is more common. Lesions or blisters develop in seedlings or tubers after an attack of the fungus (P. infestans). The fungus may disperse into new infection sites, and later a fungal mycelium develops sporangia.

The biflagellate zoospores of P. infestans can survive in dry conditions for an hour and even more in cloudy weather. Zoospores encyst and indirectly infect the host cell wherever they fall through wind or rain transmission.

In dry weather, sporangia act as an individual spore that can form a germ tube to directly invade plant cells. The sporangia germinate to get into the different cellular components. 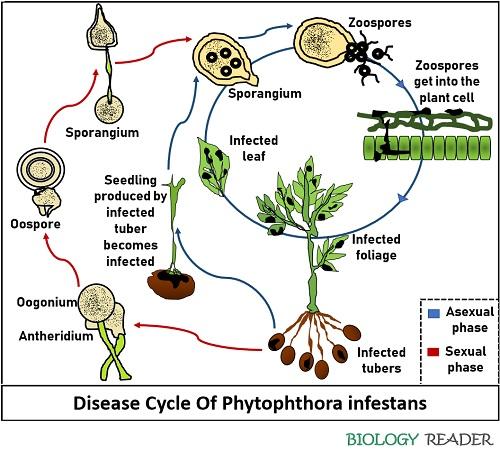 P. infestans involves diploid oospores, resulted after the nuclear fusion or karyogamy between the male antheridium and female oogonium. Later, oospores germinate to develop sporangia and follow the same pathway as we could see in the above diagram.

Phytophthora infestans has a high reproductive potential that can produce 1 to 3 lakhs sporangia per day from an individual lesion. Then, every sporangium infects new sites with visible symptoms. Lesions in the form of small or wide patches appear on leaves and stem after an incubation period of a few days.

Therefore, the high growth rate of P. infestans can cause rapid defoliation and destruction of foliage and tubers. If the management of the disease is not established correctly, then the pathogen might destroy the whole field in a short time.

If the tuber gets infected with such fungus, then the whole seedling will become diseased. In this way, the disease cycle revolves around every five to seven days, resulting in the dissemination of the late blight infection.

The disease management of late blight in potatoes includes the following control measures:

Therefore, we can conclude that the late blight disease can cause outbreaks if not appropriately managed. The reproductive power of P. infestans is very high that can form a huge number of sporangia from a single lesion, which may reach the other infection sites.

The disease cycle of late blight of potato continues by biflagellate zoospores or oospores, produced as products of asexual or sexual reproduction of Phytophthora infestans. Late blight is a community disease, which might infect other fields or crops if it persists longer.