Adaptations in hydrophyte are of three kinds, ecological, physiological and anatomical. To survive in the aquatic habitat, hydrophytes modify their structures like leaves, stem, roots and the physiology of the cells to adapt themselves according to the different aquatic habitats like freshwater, marine water, lakes, ponds.

The adaptations in hydrophyte depend upon the conditions like temperature, osmotic concentration, toxicity, flow, dissolved oxygen, nutrients of water. All these factors may influence plant growth and reproduction in the hydrophytes.

In this post, we will study the meaning and different kinds of adaptations (like ecological, physiological and anatomical) in the hydrophytes, depending upon the origin, functions and sustainability.

Meaning of Adaptations in Hydrophytes

Adaptation in hydrophytes is a common phenomenon necessary for all the aquatic plants to thrive according to the surrounding. As the different plants live in different habitats, they need certain modifications so as to adapt themselves to the changing environment. Similarly, hydrophytes also undergo few changes in their morphology, physiology and anatomy to survive in the different aquatic habitats.

Types of Adaptations in Hydrophytes 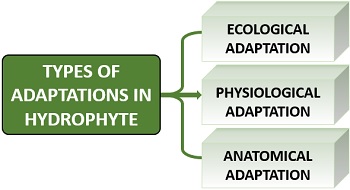 In hydrophytes, the major absorbing part, i.e. roots, are the less significant structure. Its overall growth is either poorly developed, reduced or absent. The root’s accessory components like root cap and root hairs are generally absent in floating hydrophytes.

In the plant species like Lemna, Ecchorhnia species, root pocket is present instead of root cap whose function is to maintain the water balance. Wolffia and Utricularia are plants that lack root system, but Hydrilla comprises poorly developed roots. The emergent forms contain well-developed roots.

In amphibious plants, the leaves are of two kinds (submerged and aerial leaves). The submerged leaves show resistance against potential damage by the water current and absorb dissolved carbon dioxide.

The leaves of emergent hydrophytes resemble the leaves of terrestrial plants. Aerial leaves are bulbous, lobed in structure and showing features similar to the mesophytic characters by having a wax coating on the upper leaf surface.

Shoot system: Stems and leaves participate in the cellular processes (like photosynthesis and respiration) and liberates gases (like oxygen and carbon dioxide), which eventually retain within the air cavities.

The hydrophyte plants could use gases like oxygen and carbon dioxide in the air cavities for future cell activities. Petioles in floating hydrophytes have a huge tendency of regeneration, which is reasonably controlled by the auxins.

Protective layer: Mucilage cells make up the mucilage canals, which secrete a lubricating agent, i.e. mucilage, to protect the plant body against friction, desiccation, decay and other stresses by covering the entire plant body.

Transpiration: It is absent in submerged plants while floating, and emergent hydrophytes go through a high rate of water loss or transpiration.

Reproduction: Vegetative reproduction commonly occurs in hydrophytes by the propagation of the vegetative structures like runners, stolons, root-tubers etc.

Other properties: Processes like an exchange of water, nutrients, and gases occur by the entire plant surface. Mucilage functions as a lubricating agent by surrounding the submerged parts of hydrophytes and protects them from epiphytes. An aerial part of hydrophyte bears hydathodes, which removes the additional water entering into the plant body via endosmosis.

It is present as a thin or a single layer, which comprises parenchyma cells that are non-protective in function. The epidermis of the leaves include chloroplasts, which participate in the process of photosynthesis.

Mucilage encircles the epidermis of the submerged parts and protects the plant against decay. The hypodermis is either absent or poorly developed. The submerged parts of hydrophytes generally lack cuticle but can be present as a thin layer on the aerial parts.

The submerged parts lack stomata, but the upper surface of floating leaves carries stomata called “Epistomatous leaves”. Potamogeton is a hydrophyte consisting of non-functional stomata. The emergent hydrophytes consist of scattered stomata on all aerial parts of hydrophytes.

It refers to the air cavities found between the differentiated mesophylls, which allows the convenient diffusion of the gases. The diffused gases travel through the internal gas spaces of young leaves, then forced down to the root by the aid of water pressure through the aerenchyma cells of the stem. Older leaves do not support the pressure gradient, so the gases from the roots expel out through the leaves.

Hydrophytes possess a highly-developed and thin-walled parenchymatous cortex, which helps the plants against mechanical stresses and also permits efficient gaseous exchange. The large air cavities occupy the major portion. Hydrophytes comprise starch granules as the primary reserve food material, which accumulate inside the cortex and pith.

Hydrophytic plants possess mechanical tissue (sclerenchyma and collenchyma). Only the aerial or terrestrial parts possess the mechanical tissues, and the floating and submerged parts completely lack or contain poorly developed mechanical tissues. Cystoliths or sclereids of variable shapes are present in the tissues of leaves and other plant cells.

Submerged hydrophytes have poorly-developed xylem and tracheids. In contrast, the amphibious plants contain well-developed xylem (towards the central region). Secondary growth in stems and roots does not occur in hydrophytes. In hydrophytes, the presence of endodermis and pericycle are distinct.

Therefore, we can conclude that all the living creatures undergo specific changes according to the changing environmental conditions where they have to live in, whether it is aquatic or terrestrial. Hence, the hydrophytic plants also go through a few modifications in their morphology and physiology to sustain life in an aquatic environment.