Sepals and petals differ more or less based on their colour, shape and size. Petals are fluorescently coloured with a symmetrical or asymmetrical shape, and their size varies from plant to plant.

In contrast, a sepal in most flowers appears green in colour with varying shapes and sizes. A flower is dichlamydeous when a perianth has distinct calyx and corolla.

This post explains the key differences between sepals and petals and the comparison chart. You will also get to know the definition and similarities between the two. 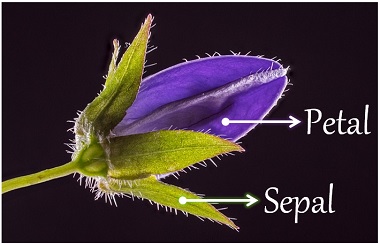 Sepals are the modified leaves that constitute the outermost whorl of the flower. These leaf-like structures keep the flower intact during the budding stage.

Sepals in the outer whorl of the flower are collectively called a calyx. Thus, a sepal is a unit of the calyx. The union of sepal appendages often forms another whorl called a whorl of bracts.

A whorl of bracts resembles sepals and is present outer to the calyx. The length and thickness of a sepal vary among different plant species. 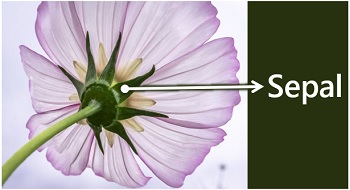 Usually, the number of sepals could be between two to five but vary in different flowers. We can classify different plants by knowing the size, number and arrangement of sepals.

After fertilization in flower, sepals wither or become vestigial. But, some may remain intact with the fruit.

Petals are the modified leaves that constitute the second outer whorl of the flower. These petaloid surround the flower’s male and female reproductive parts.

Petals exist in different colours, shapes and sizes. The characteristic feature of petals is that they are brightly coloured, attracting pollinators. For this reason, petals play a significant role in the pollination process.

Petals in the inner perianth are collectively called the corolla. Thus, a petal is a unit of the corolla. 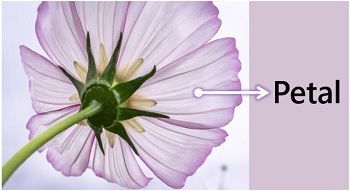 Generally, the structure of petals comprises:

Petals can be symmetrical or asymmetrical. Eudicot or dicot flowers generally have four or five petals. In contrast, monocot flowers have three or six petals. We can also classify plants by knowing the size, number and arrangement of petals.

After fertilization in flowers, petals are useless, and they wither and fall off.

Key Differences Between Sepals and Petals 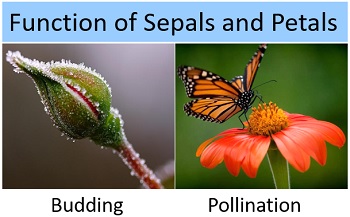 Thus, the sepal and petal together constitute the flower’s non-reproductive part or perianth. Merosity is the basic number of parts within each whorl. The number of sepals and petals in the perianth (outer whorl) varies depending on the plant species.

Then, coming into the shape, size and colour, both sepals and petals differ. Not only structurally but functionally they also differ that we have discussed in this post.