The RBC count method comes under haemocytometry, which quantitatively measures the number of RBCs in a blood sample. Haemocytometer or Neubauer’s chamber slide is a manual method to count RBCs.

Nowadays, more accurate or automated devices have been developed like electrometric and photometric counters that can count the cell constituents of the blood sample.

It is not possible to directly count the RBCs in a blood sample. Thus, it is necessary to dilute the blood sample or blood specimen using one of the RBC diluting fluids (hayem’s or formalin citrate diluting fluid).

In this context, we will discuss the requirements, preparations and procedure of the RBC count through Neubauer’s chamber. You will also get to know the formula for calculating the number of RBCs.

RBCs stand for red blood cells. It is also called erythrocytes, which appears red-coloured due to the coloured pigment (haem) and exists as a biconcave disc. RBCs possess a diameter of 7.5 to 8.7 μm and a thickness of 1.7 to 2.2 μm. It lacks a nucleus and has a life span of 120 days.

Haemocytometer refers to the micro-slide through which the number of erythrocytes or RBCs can be enumerated via two methods, namely microdilution and macrodilution. Following are the requirements of the RBC count method:

It is a specialized thick glass slide used to count the eukaryotic cell suspension. Haemocytometer has a size of 30 X 70 X 4 mm. Its central portion is ruled, where the cell counting is performed. The counting grid has a size of 3 mm X 3 mm. One can estimate the number of red blood cells using a haemocytometer after diluting the blood sample with RBC diluent. 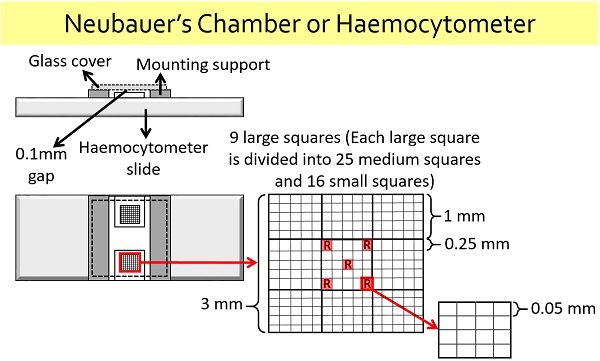 It is commonly used to dilute the blood sample with the RBC diluting fluid. It gives a dilution of 1:100 and 1:200. The reading starts from 0.5 to the endpoint of 101. There is a red bead within the RBC pipette, which mixes the RBC specimen with the diluting fluid.

There is a mouthpiece attached towards the end of the suction rubber tube. Through the mouthpiece, the blood is sucked upto a point 0.5 and diluting fluid upto the endpoint 101. The diagram below provides a well-labelled presentation of an RBC pipette. 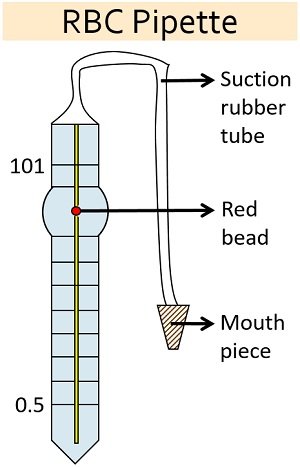 It is a device invented by Dr Heinrich Schnitger. The micropipette is commonly employed in practical or research labs to aspirate or dispense liquid of the desired volume. The size of the micropipette differs.

It uses disposable pipette tips to load or dispense the sample of interest. You could see a diagram below that specifies the parts or components of a micropipette. 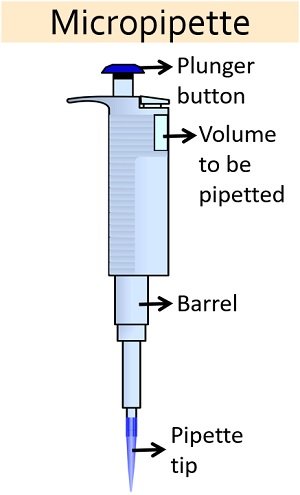 It is a square-shaped coverslip, having a width of 20 mm. To count the number of eukaryotic cells, you should keep the glass cover over the central portion or the ruled area of Neubauer’s chamber. There is usually a 0.1 mm gap between the glass cover and the central area of the haemocytometer.

Capillary blood or anti-coagulated blood is generally taken. By pricking the tip of a ring finger, you can directly collect the capillary blood, as capillaries serve as the smallest blood vessels nearby the skin surface.

EDTA serves as an anticoagulant or chelating agent, which prevents blood coagulation by binding with the calcium ions. Other anticoagulants like sodium citrate, potassium oxalate etc., can also be used to prepare whole blood samples.

To count the RBCs, you can perform microdilution and macrodilution quantitative methods by using Neubauer’s chamber.

Sample preparation: It uses an RBC pipette to incorporate the blood specimen with the diluent.

First, focus the rulings of the haemocytometer slide using a 10X objective lens. Using coarse and fine adjustment knobs, focus on the five squares of the large central square to count the number of red blood cells under the 40X objective. 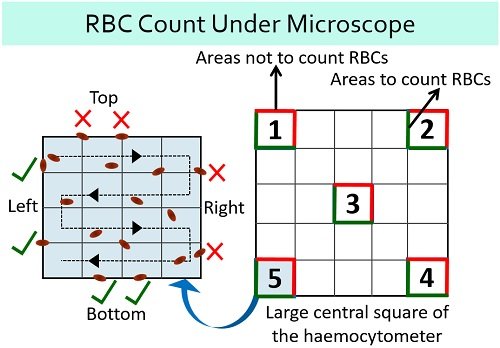 Suppose, N or number of RBCs in the five squares is 486, then the equation will be represented as:

We can conclude that the RBC or erythrocyte count method provides the concentration of RBCs per µL of whole blood. Through a haemocytometer, RBCs are counted manually. RBCs’ normal concentration in children, women and men range between 4.0-5.5 million/mcL, 4.2-5.4 million/mcL and 4.7-6.1 million/mcL, respectively.