DNA generally exists in three common types (represented as B, A and Z forms). Besides B, A and Z forms, DNA may rarely exist as A, C and E forms. Therefore, DNA possesses six different forms that are either in a left or right-handed fashion, under appropriate physiological conditions.

Inspite of the above six forms, DNA may form some unusual structures like bent, triple-stranded and four-stranded DNA. The conformation of DNA strongly depends upon the pH and ionic strength of the solution. Certain viruses like bacteriophage ɸ x 174 comprise a single stranded DNA.

Some viruses and almost all prokaryotes possess circular and superhelical DNA. In this context, we will discuss all the possible forms of double-helical DNA.

Different forms of DNA can define as the different structural configuration of DNA that shows a distinct change in structure and physiology at relative pH and ionic strength of the solution. Different forms of DNA like B, A, C, D, E and Z have revealed after the X-ray diffraction analysis of DNA crystals at atomic resolution.

DNA (hereditary material of the cell) consists of a long polynucleotide chain and shows structural diversity by changing its structural configuration, based on various factors like: 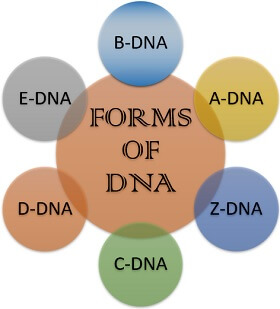 Among six different forms of DNA, B, A and Z forms are the most common:

It is the most common form of DNA, which exists as a right-handed double-helical DNA. It was pioneered by Watson and Crick. B-DNA structure forms under normal physiological conditions like 92% relative humidity and low ionic strength.

Based on the X-ray diffraction studies, B-DNA represents an average conformation of DNA. The majority of the cell comprises a B-DNA type, and the coiling of B-form is in a right-handed pattern.

The nucleotide bases occupy the core, whereas the sugar-phosphate bone occupies the peripheral region of the DNA-helix. In the solvent, the bases present at the edges of the B-form gets exposed. The width of each base pair is similar in both the polynucleotide chains of DNA.

The diameter of the B-form helix is 20Å, and a single turn in B-form comprises 10 base pairs (perpendicular to the helical axis). Bases show complementary base pairing in such a way as A=T and G≡C. There is plectonemic coiling in the B-form, where the two strands interwind at the same helix.

It is the second most common form of DNA, also called A-DNA. It has DNA of right-helical sense. A-DNA structure forms under normal physiological conditions like 75% relative humidity and the presence of sodium, potassium, and caesium ions.

The coiling of A-DNA is in a right-handed fashion. It is metastable, i.e. easily turns into a D-form. The nucleotide bases are displaced away from the core and found closer to the major groove.

The conformation of bases in the A-form gives rise to the ribbon-like structure with an open cylindrical core. A-DNA is considered to be more stable because of an additional –OH group. The width of each base pair is similar in both the polynucleotide chains of DNA with a diameter of  23Å.

In A-form, base-pair tilt is higher than the B-form. A single turn in B-form comprises 11 base pairs (perpendicular to the helical axis). In A-form also, both the strands are antiparallel, or they have plectonemic coiling.

It is another form of DNA, which differs from both the B-DNA and A-DNA. It exists as left-handed double-helical DNA. This structure forms under very high salt concentration. Some of the cells comprise the Z-DNA type, and it was first introduced by the three scientists Rich, Northeim and Wang in 1984.

The coiling of the Z-form is in a left-handed and zig-zag pattern. The conformation of Z-DNA is long and thin compared to the B-DNA. It shows an asymmetric structural configuration, which gives rise to the zig-zag helical structure with no internal space.

The Z-DNA forms by the alternating stretching of purines and pyrimidines bases. The Z-form helix’s diameter is 18Å, and the base-pair tilt is 7 Å, which is lower than the B and A-form. A single turn in B-form comprises 12 base pairs, which are perpendicular to the helical axis.

In Z-form also, there is zig-zag plectonemic coiling. It possesses antiparallel strands like B-DNA. In Z-type, the sugar pucker or deoxyribose ring is present at the “C3” endoform for the purine bases and the “C2” endoform for the pyrimidine bases. The Z-type major groove’s width is 2Å, whereas the width of the Z-type minor groove is 8.8Å. 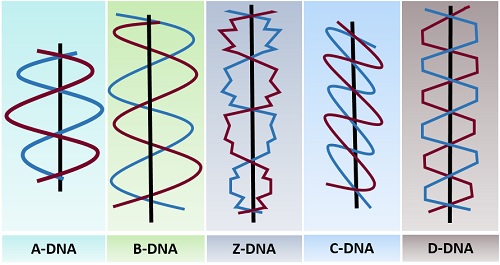 Besides A, B and Z forms of DNA, few other types rarely occur:

C-DNA is found in minimal quantity, and its configuration exists at 66% relative humidity with low ionic strength. The helix of C-DNA is twisted in a right-handed fashion with a helix pitch of 30.97Å. It consists of 9.33 base pairs per turn.

Both the strands of C-DNA are antiparallel to each other, unlike Z-DNA. C-DNA has a helix diameter of 19.0 Å. The rotation per base pair is 38.6 degrees, with a base pair tilt of 7.8 degrees. The size and shape of the C-DNA are smaller than the B-DNA and A-DNA.

In the cell, D-DNA is found very rarely. The helix of D-DNA is twisted in a right-handed fashion and called the poly (dA-dT) and poly (dG-dC) form. D-form consists of 8 base pairs per turn, which are displaced backwardly with respect to the DNA-helix. Both the strands of D-DNA are antiparallel to each other. The base pair tilt of D-DNA shows a negative tilt of -16.7 degrees with an axial rise of 3.03Å per base pair.

In the cell, E-DNA is found very rarely and having extended or eccentric DNA. The helix of E-DNA is long, and the bases are perpendicular to the helical axis. E-DNA consists of the deep major axis and shallow minor axis. After the X-ray crystallographic study, E-DNA is found intermediate between the B-DNA to A-DNA.

The conformational change of the double-helical DNA into different forms mainly depends upon the following three factors: 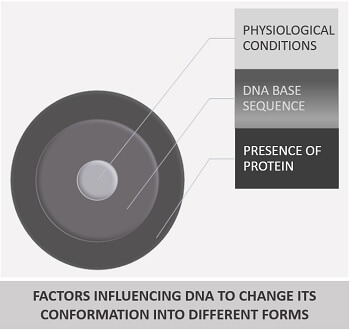 The above three factors mainly influence the DNA and make it structurally variant. Therefore, we can conclude that the double-helical structure of the DNA is not uniform and can vary under different physiological conditions provided.

2 thoughts on “Different Forms of DNA”