Biohydrogen is now commercially produced as a biofuel. It is the advanced biofuel, which makes the use of living biomass or organisms for the production. Biohydrogen is now considered best among all the biofuels as it accounts to fulfil all the energy demands as it can be obtained from the sustainable resources like:

Biohydrogen is defined as the biofuel or the source of energy that uses living microorganisms to convert hydrogen via biological processes like fermentation and photolysis in a specialized container or a bioreactor.

Milestones in the Discovery of Biohydrogen

There are three generations of biofuel, which include:

Ideal Properties of Hydrogen as a Biofuel

Fermentation and biophotolysis are the two popular methods used in biohydrogen production. 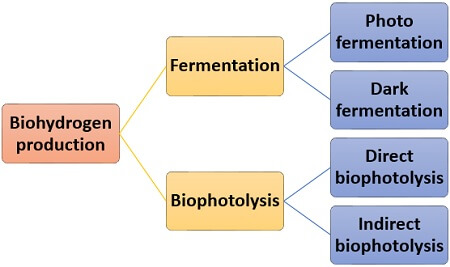 In the above equation, we can see that there is no evolution of oxygen or indicates the anoxygenic photosynthesis.

It is a process which makes the use of carbohydrate as an energy or carbon source. Dark fermentation does not require a source of light energy. Other than carbohydrate (like glucose), it can also use other substrates like organic compounds, polymers (starch, cellulose etc.), and algal biomass etc. Dark fermentation is a very complex process to carry out, which requires a series of biochemical reactions.

It makes the use of photoautotrophic organisms such as microalgae and cyanobacteria. These organisms use light as an energy source and carbon dioxide as a carbon source for the splitting of hydrogen. Therefore, the production process of biohydrogen in biophotolysis is carried under anaerobic conditions.

It makes the use of solar light as a light source and photosynthetic algae to convert water into chemical energy or to produce hydrogen.
Direct photolysis involves two steps for the generation of biohydrogen:

This process is also called one stage photolysis, in which the hydrogen can be produced directly by the use of water, light energy and algae photosystem.

This process makes the use of photosynthetic microorganisms like microalgae, and cyanobacteria etc. Indirect photolysis also converts solar energy into the chemical energy by the series of two steps. In the first step, there is the production of biomass by the photosynthetic system. The second step involves the utilization of the biomass rich in carbohydrates to produce biohydrogen.

Indirect photolysis involves the removal of both hydrogen and oxygen at different steps during the process to avoid the sensitivity of the hydrogenase enzyme. It involves two stages to complete a reaction, so it is also called two-stage photolysis. Cyanobacteria used in the process of indirect photolysis are Gloebacter sp and Synechocystic sp etc.

Table showing different biological processes for the production of biohydrogen:

There are several factors that may directly or indirectly affect the biohydrogen production:

Biohydrogen is considered to be a future fuel because of its high energy density, zero-emission of carbon dioxide and other factors, which we have discussed in this post. In addition to this, several studies are also going on to improve the technology and the production of biohydrogen.