Acid-fast staining was originally pioneered by a scientist named Paul Ehrlich in the year 1882. Later, it was modified by Ziehl and Neelson in 1883. Thus, acid-fast staining is also called Ziehl Neelson staining. It is a type of differential staining method used to distinguish between acid-fast and non-acid-fast bacteria.

Mycobacterium is an acid-fast bacterium which retains the colour of carbol fuschin even after treatment with a decolourizer. The mycobacteria species retain the primary stain’s colour because they contain mycolic acid in their cell wall.

Mycolic acid is a waxy substance that does not allow the decolourizer to enter the cell wall due to its waxy nature. Therefore, acid-fast staining discriminates the mycobacterium species from the other groups of bacteria.

Non-acid fast bacteria quickly lose the primary stain’s colour due to the absence of mycolic acid and appear blue. This post discusses the definition, requirements, principle, process, observation and result of acid-fast staining.

Acid-fast staining refers to one of the staining methods, which differentiates the Mycobacteria species from the other bacterial groups based on the staining properties and cell wall differences. The cell wall of Mycobacterium species contains mycolic acid, which makes it resistant towards the effect of acid decolourizer and thereby called the “Acid-fast bacteria”. In contrast to this, non-acid fast bacteria lack mycolic acid in their cell wall and lose the primary stain’s colour.

Acid-fast staining is a differential staining procedure which uses a combination of three reagents: 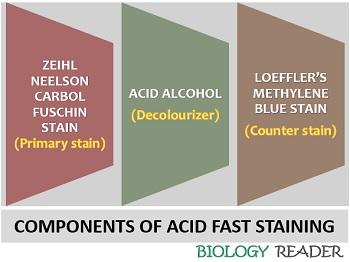 It functions as a Primary stain. To stain a mycobacterium, one needs a special stain like ZNCF. An ordinary stain cannot stain the mycobacterial cells. ZNCF stain has a phenolic base and a carbol fuschin dye. A phenolic base of ZNCF shows a high affinity toward the lipid content.

Thus, ZNCF dye can solubilize the lipoidal material in the cell wall and stain the cell red. Due to high lipid content, a mycobacterial cell wall is less permeable. So, a phenol base increases the cell permeability, by which a cell allows the stain to penetrate.

It serves as a decolourizing agent, which contains 3% of HCL along with 95% ethanol. It plays an essential role in the identification of acid-fast and non-acid-fast organisms. Acid-fast bacteria contain a high lipid content, which prevents the cell from binding with stains and decolourizers.

Acid-fast staining is based upon the principle of staining the bacterial cell relative to their cell wall differences. The cells of Mycobacteria species appear red, whereas non-acid fast bacteria appear blue. A smear is subjected to heat after staining with Zeihl Neelson Carbol fuschin. During steam, carbol fuschin penetrates the bacterial cell. All the cells appear red after 2-3 minutes because a primary stain (carbol fuschin) is added at several intervals during the steaming process to prevent cell drying.

After this, a decolourizer (3% HCl) is added to the smear. Now, this is an important step that helps us to distinguish between the mycobacteria and the other bacteria. The mycobacteria resist the effect of decolourizer because of the substantial lipoidal material or mycolic acid in the cell wall. Thus, mycobacteria are considered acid-fast bacteria, as they don’t allow the penetration of the acid decolourizer into the cell, and remains appear red. 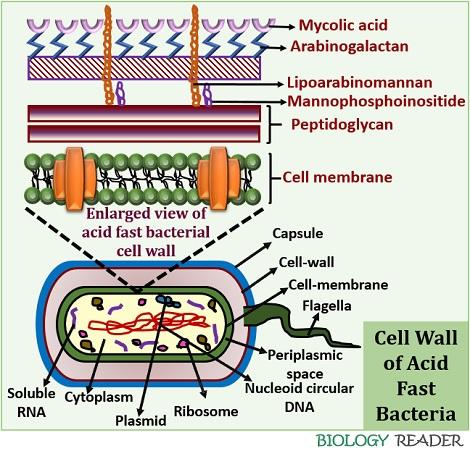 Only the decolourized or non-acid fast cells will take the blue colour of methylene blue stain on counterstaining. Conversely, the acid-fast cells will remain red in colour.

The process includes the following steps: 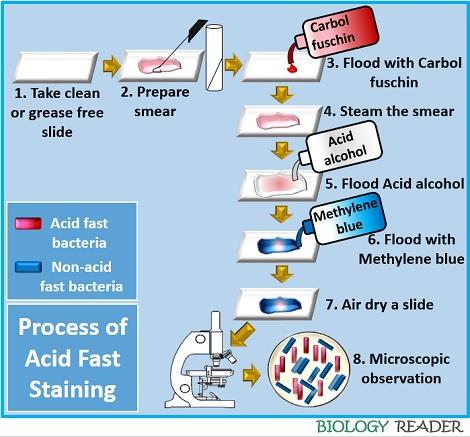 After performing acid-fast staining, we could observe the following changes, as you could see in the figure below. 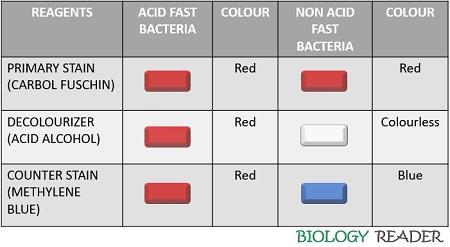 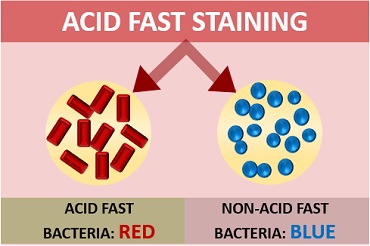