Vitamin B6 is a water-soluble vitamin and a part of the vitamin B complex. It is named “Vitamin B6” because it comprises six vitamers, namely pyridoxine, alcohol, pyridoxal, an aldehyde and pyridoxamine (PLP and PMP).

PLP (pyridoxal 5′-phosphate) and PMP (pyridoxamine 5′-phosphate) serve as the active coenzymes. Pyridoxine actively participates in protein, fat and carbohydrate metabolism, thereby providing energy and essential nutrients to the cells. Vitamin B6 is generally stored within the jejunum portion of the human body.

Naturally, it is present as a glycosylated form in fruits and vegetables or exhibits reduced bioavailability. Therefore, pyridoxine should be routinely incorporated into our regular diet, as it is essential for our brain health, immune function and various metabolic pathways.

In post describes the definition, food sources, recommended intake, absorption and dietary supplements of pyridoxine. In addition, the symptoms, risk factors, diagnosis and treatment of the vitamin B6 deficiency have also been discussed, along with some important functions of pyridoxine.

Definition of Vitamin B6

Vitamin B6 refers to the water-soluble vitamin found naturally in a wide range of foods, and it can be artificially substituted by taking oral capsules, tablets, or tonics supplemented with pyridoxine. Pyridoxal 5’ phosphate and pyridoxamine 5’ phosphate function as the two coenzymes, which perform a pivotal role in the metabolism of biomolecules, production of haemoglobin, and functioning of the nervous system and immune system.

As vitamin B6 is water-soluble, it cannot be stored in our body and excreted out in the form of urine. So, it becomes necessary to intake food rich in pyridoxine. The nutrients and minerals from the vitamin B6 food sources are necessary for the healthy functioning of the human body.

We can fulfil the requirement of pyridoxine in our body by the following food sources, as it’s best to intake vitamins naturally through foods. 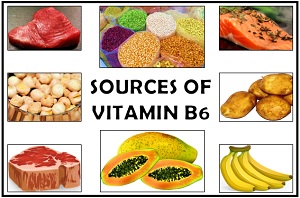 Generally, DRI is a term used as a reference value used in planning and managing the nutrients requirement of healthy people, and it stands for dietary reference intakes.

DRI is developed by the Food and Nutrition Board, situated in Washington DC. The values may vary by gender and different age groups.

The table given below lists the current RDAs for pyridoxine. FNB developed an AI for infants from birth to 1 year age.

Absorption and Excretion of Vitamin B6

After its absorption, the cells metabolize it to the active forms inside the liver. The metabolization of pyridoxine occurs inside the mitochondria and cytosol at a cellular level. The jejunum mucosa of the small intestine absorbs pyridoxine and pyridoxamine.

The tissues further oxidize the trapped pyridoxine and pyridoxamine. After metabolism, the kidneys excrete products of vitamin B6 (majorly 4-pyridoxic acid), and the half-life elimination is more than 15-20 days.

In the market, it is available as a multivitamin (conjugated with other groups of the vitamin-B complex). Most commonly, pyridoxine hydrochloride fulfils the need for vitamin B6. The dietary supplements are available as capsules, tablets or tonics.

A body consumes a large amount of vitamin B6 and quickly excretes most of it in the urine. Approximately 28-36% of the population uses supplements to overcome the deficiency of vitamin B6.

Deficiency of Vitamin B6

The deficiency of vitamin B6 is correlated with the lack of vitamin B12 and folic acid in our body.

Individuals vulnerable to the deficiency of vitamin B6 are as follows:

The vitamin B6 deficiency in a person can be diagnosed by looking into some clinical manifestations:

Vitamin B6 deficiency is generally curable by the intake of dietary supplements (oral capsules or tablets). Vitamin B6 supplements should be prescribed by the physician.

An overdose of pyridoxine may cause toxicity and leads to cause neuropathies, movement disorders, photosensitivity, nausea, heartburn, painful dermatological eruptions.

Metabolism of macronutrients: PLP and PMP are the coenzymes of vitamin B6 that carry out 100 enzymatic reactions. These cofactors participate in the metabolism of amino acids (particularly homocysteine), carbohydrates (gluconeogenesis and glycogenolysis) and lipids.

Immune function: Both PLP and PMP play a vital role in the proper functioning of the immune system by promoting the production of lymphocytes and interleukins.

Brain health: The cofactors of vitamin B6 also contribute in regulating brain health or the nervous system by producing the neurotransmitters (like serotonin and norepinephrine) and forming myelin.

According to the research, pyridoxine proves to be effective against many health issues like depression, cancer, cardiovascular diseases, and many more.

Pyridoxine also controls the increased concentration of homocysteine in the blood and reduces the chances of depression and other psychiatric problems that may consequence in individuals.

Pyridoxine conjugated with vitamin B9 and vitamin B12 regulates increased homocysteine levels in the blood, thereby reducing the risks associated with heart and blood vessel-like blood clotting, the formation of free radical cells etc.

There are no proper shreds of evidence to prove that pyridoxine helps in preventing cancer, but according to several studies, it is notably effective in treating gastrointestinal cancers.

Pyridoxine proves to be effective against oxidative stresses, dispersion of tumour cells, and chronic inflammation, which in turn helps in controlling colorectal cancer.

It is a medical condition where pregnant women encounter symptoms like nausea and vomiting during their first few months of pregnancy. It generally persists for 20 days or more, which sometimes necessitates medical care due to severe dehydration.

According to the research, the combination of pyridoxine with an antihistamine complex (doxylamine) lowers the hospitalization rates and reduces the chances of nausea and vomiting in pregnant women.