Arabinose operon is one of the regulatory systems found in the bacterial cell (E.coli), facilitating arabinose catalysis. L-arabinose operon and ARA-operon are the two alternative names of the arabinose operon. Ara-operon system provides energy to the cell by the breakdown of arabinose into xylulose 5-phosphate.

Arabinose is a 5-C sugar or aldopentose that provides energy in a carbon source to the bacterial cells. Xylulose 5-phosphate is a ketose sugar and serves as an intermediary product of the pentose phosphate pathway. The bacteria utilize this carbon source to perform various functions. In the arabinose operon, there is a group of genes that perform specific functions within the cell.

The structural genes (ara-bad genes) encodes for three enzymes that aid in the degradation of arabinose. Ribulokinase (ara-B), I-arabinose isomerase (ara-A) and I-ribulose 5-phosphate 4-epimerase (ara-D) are the enzymes encodes by the ara-bad structural genes. Ara-C regulates the arabinose operon. Ara O1 and O2 are the operator genes, and PBAD and PC  are the ara-operon’s promoter genes.

The main purpose of arabinose operon is to break the complex arabinose molecule into xylulose 5-phosphate, which then enters the metabolic pathway (pentose phosphate pathway). You will get to know the definition, structural elements and regulation of the arabinose operon.

Arabinose operon can define the system carrying the number of genes like a regulatory, promoter, operator, inducer, and structural genes for L-Arabinose’s breakdown into xylulose 5-phosphate. The structural genes ara-B, A and D carry out the conversion of arabinose into xylulose 5-phosphate. Ara-B, Ara-A and Ara-D transcribe the mRNA by encoding the kinase, isomerase and epimerase enzymes. The enzymes kinase, isomerase, and epimerase catalyze L-arabinose’s conversion to xylulose phosphate, which then enters the pentose phosphate pathway.

The structure of arabinose operon is linear, and it consists of four specific genes along with the catabolic active site.

In arabinose operon, an activator site is termed as CAP. A term CAP stands for catabolite activator protein, which activates the efficiency of transcription rate by promoting the effective binding of the RNA polymerase to the promoter region. When the availability of glucose is high with low arabinose, the ATP will not convert into cAMP.

If the availability of glucose is low with high arabinose content, then the ATP will convert into cAMP, and the whole complex will then bind to the CAP to activate the transcription of mRNA. The cyclic AMP plus CAP will form a complex which binds to the CAP region of the operon.

There are two promoter genes in the arabinose operon, namely PBAD and PC. PBAD is the promoter site of ara BAD structural genes, promoting the synthesis of ara BAD mRNA. PC is the promoter site of ara C regulatory gene, promoting the Ara C repressor protein synthesis. The Ara C repressor exists in active P1 state (in the absence of inducer), while in inactive P2 state (in the presence of inducer).

The arabinose operon is regulated both positively and negatively, like a Lac-operon model.

Here, a term positive indicates that the synthesis of mRNA will occur. Therefore, the ara BAD mRNA is formed in positive regulation. Arabinose operon is positively regulated by the two conditions that are explained below:

Case-I (when both inducer and repressor protein is absent):

There will be no repression of the arabinose operon in the absence of both an inducer and a repressor protein. In this condition, the RNA polymerase will bind with the specific promoter region and transcribe the ara-BAD genes to form mRNA. But in this case, the rate of transcribing mRNA is much slower.

Case-II (when both inducer and repressor are present): 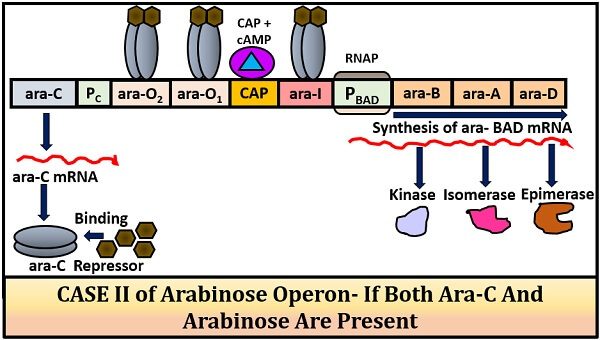 The inducer (arabinose) will bind with the repressor protein to regulate the mRNA transcription. The Ara-C protein plus arabinose forms a complex that will not allow the loop formation. The arabinose binds with the Ara-C dimer and changes its structural configuration. This change in structural configuration will allow the RNA polymerase to transcribe the ara-BAD genes to form mRNA. The mRNA will further translate into proteins.

Here, a term negative indicates that the mRNA transcription will not occur. To understand the process in a simple way, let us take condition III to compare it with the before two conditions.

Case-III (when only repressor protein is present): 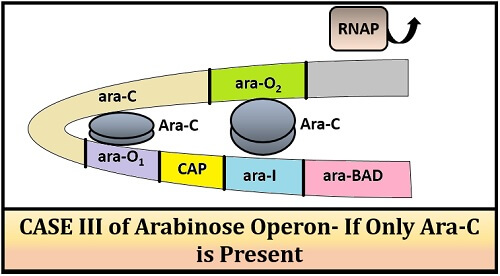 Therefore, ara-operon can be both positively and negatively regulated. In simple words, we can say that the arabinose operon system can be controlled by both activation and repression. The repression of the operon is through the repressor protein, i.e. Ara-C protein. The activation of the operon is through the inducer. So, we can conclude that the arabinose operon is switched off in the presence of repressor and switched on in the presence of inducer.