Although, the amount of substrate required to produce desired products remains the same as in batch fermentation. But, the fed-batch culture involves intermittent addition of substrates at regular intervals instead of adding all the substrates at once.

Thus, the term fed justifies the meaning of the process that involves the continuous feeding of substrates into a fermentor or culture vessel. This post describes the definition, key points and approaches of fed-batch fermentation. Besides that, you will get to know the applications, advantages and disadvantages of the fed-batch culture.

It is one of the popular industrial fermentation processes, which supplements nutrients into the bioreactor periodically or at specific intervals in order to achieve high densities of the cell biomass. Thus, the fed-batch fermentation is a semi-continuous system where products remain in the bioreactor until the run and the substrate is added in small amounts throughout the process.

In simple words, the approach of fed-batch fermentation lies between the principle of batch and continuous culture methods.

Let us discuss some important points of the fed-batch culture before moving into the topic more in detail.

Approaches of the Fed-Batch Culture

Prevents Catabolite Repression: Catabolites are the products produced after the breakdown of complex products into simpler forms, and the process is known as “Catabolism”. Repression is a regulatory mechanism that represses the synthesis of specific enzymes. Thus, catabolite repression refers to the process where some catabolites can repress the enzymatic activity or enzyme synthesis.

For instance, the catabolites of glucose suppress the enzymatic activity of beta-galactosidase (an enzyme necessary to break down lactose). Thus, the E.coli cell will not take up lactose due to glucose present in the cell surrounding, and the phenomenon is known as the “Glucose effect”.

Prevents Substrate Inhibition: It refers to the mechanism where the substrate itself inhibits the microbial cell synthesis of specific enzymes by binding to the site of an inhibitor. There are two possible reasons for such binding.

One is the high concentration of substrates or reactants that compete with the inhibitor molecules to block the enzyme’s inhibitor site. The other reason is similarities between the binding site of substrate and inhibitor.

Maintains High Cell Densities: Fed-batch culture is predominantly employed to obtain high cell densities after the intermittent supply of nutrients. We know that microorganisms double their population after each division or follows exponential growth.

Thus, the exponential feeding of substrates into the bioreactor is important to maintain the microbial cell density. Increased cell density favours more productivity of the fermentation broth and yields more products and metabolites during the whole process. 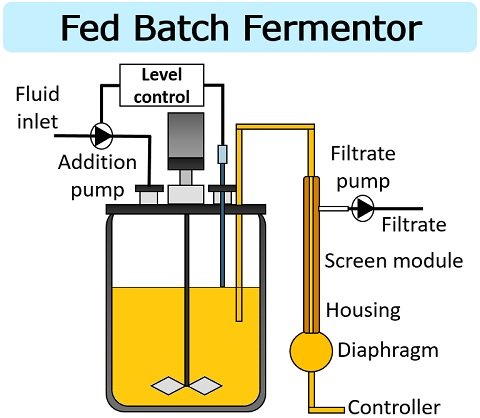 Therefore, the fed-batch culture prevents nutrients from becoming a limiting factor by supplying substrates at regular intervals during cultivation. It is a partly open or semi-continuous system. The fed-batch fermentation is an advanced technique over batch fermentation.

It overcomes the limitations of the batch culture resulted due to the addition of substrate once in a single batch. Conditions like high viscosity, catabolite repression and substrate inhibition generally consequence due to the excess of substrates in the cell surrounding.