MacConkey agar media was first introduced by a scientist named Alfred Theodore MacConkey in the year 1890s. It is primarily exercised to isolate and differentiate the non-fastidious, gram-negative bacilli belonging to the Enterobacteriaceae family.

Previously, it was first considered as “Solid differential media”. But now, both liquid broth and solid culture MacConkey media preparations are generally practised in the laboratories for the selective as well as differential growth of microorganisms.

MacConkey agar media includes various constituents like bile salt, lactose and neutral red, which serve as the indicator system. It helps us to study and identify the growth pattern of the bacterial isolates based on the bile salt precipitation, lactose fermentation and formation of acid.

In this context, we will study the definition, composition, media preparation and principal role of the different constituents in the MacConkey agar media. Also, the result interpretations and the types of modified MacConkey agar media are explained along with the intended uses and limitations of the culture media.

MacConkey agar media is also employed as a differential media by which one can easily discriminate the closely related gram-negative bacteria, depending upon the lactose fermentation and acid production. It also acts as the indicator media, which indicates the presence or absence of lactose fermenters by a definite colour change in the developing colonies as well as the media.

Following are the ingredients to prepare 1L of the MacConkey agar media:

The proteases and peptones provide vital elements and the sole N-source for the growth of gram-negative rods. Lactose is a fermentable carbohydrate that provides a sole C-source to promote bacterial growth.

Bile salt behaves as a selective agent that particularly suppresses the gram-positive organisms to grow. Gram-negative enteric bacteria are resistant to bile salts by having a bile-resistant outer membrane.

Sodium chloride functions to supply essential electrolytes for the cell growth of gram-negative organisms and also maintains the osmotic concentration.

Crystal violet is also a selective agent that mainly restricts the growth of gram-positive bacteria. Agar acts as a solidifying agent of the media.

Preparation of the Media

The MacConkey agar media principally help in the isolation and differentiation of the gram-negative bacterial isolates. The property of differentiating bacteria depends upon the capability of the organisms to ferment lactose. 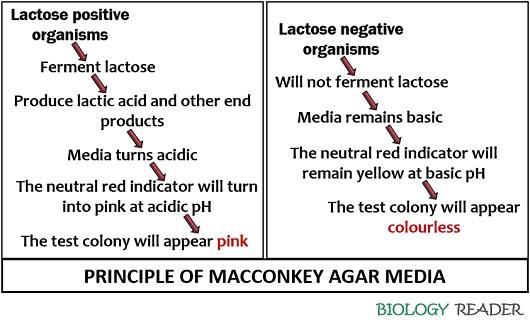 The lactose fermenting organisms produce a certain amount of acid due to fermentation and dropdown the pH of the media. As the pH drops below 6.8, the neutral red indicator will turn into pink that will be absorbed by the test organism.

Strong lactose fermenters will utilize lactose to form enough acids, resulting in the bile precipitation around the bacterial growth. The precipitation of bile salt gives a hazy appearance around the growth, and the colony appears as a pink halo.

The growth and colour of the bacteria in the culture media have three possible outcomes.

Modifications in the MacConkey Agar Media

MacConkey agar works as a selective medium that isolates the gram-negative microorganisms from different sources like urine, stool, food samples etc. It also behaves as a differential media that discriminates between the closely related gram-negative enteric bacilli.

MacConkey agar medium has a drawback that it gives presumptive test results of the isolated organisms. For the confirmatory results, the test organism needs further subculturing and biochemical tests. There is another limitation where some strains of the Proteus species may flock on this medium.