Aspergillus is a common fungus, which is present everywhere (in the soil, air, water etc.), or we can say it is present in a wide range of conditions. Therefore, these are ubiquitous in nature. It consists of several 100-500 species, among which some are economically important, and some are deleterious, i.e. pathogenic. It was named in 1729, by a scientist named Antonio Micheli who was the director of the public gardens in Florence.

Most predominantly, the Aspergillus species are found in the damp areas and decaying matter. Aspergillosis is the disease caused by the various pathogenic strains of Aspergillus. In this context, we will mainly study morphology, structural properties, life-cycle and the economic importance of the medically important fungus Aspergillus.

Aspergillus has a filamentous structure. It consists of the following components in its cell structure that include: 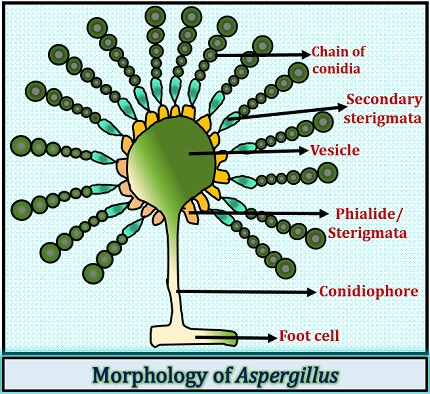 Foot cell: It is the vegetative structure of the cell called the vegetative hyphae. It is found attached to the substratum, through which the hypha absorbs the nutrient for its further growth. Foot cell is generally L or T shaped. When it grows, it gives rise to the conidiophore.

Conidiophore: It is long, slender and perpendicular to the foot cell or vegetative hyphae. Conidiophore is the erect hyphal branch, which enlarges at an apex and gives rise to the vesicle.

Vesicle: It is rounded, elliptical or club-shaped, which develops a layer of cells called phialides.

Conidia: These are the exogenous reproductive structure evolving from the sterigmata. The conidia appear in chains and are having a basipetal arrangement, in which the youngest conidia present at its base and the oldest conidia at the top.

Mycelium: It is hyaline, septate, branched, multicellular, multinucleated and tubular in structure. Mycelium is encased by the two layers, namely inner layer (made of cellulose) and an outer layer (made of chitin).

Cytoplasm: It is granular in appearance consisting of cytoplasmic bodies such as mitochondria, endoplasmic reticulum, ribosomes, vacuoles etc.

The Aspergillus reproduces by the following three methods:

Vegetative reproduction occurs by the fragmentation method, in which a vegetative hypha breaks into few fragments which then develops into a new vegetative body.

The asexual reproduction of Aspergillus includes the following steps:

Ascogonium possesses three parts (Basal, middle and apical) and it is multinucleate, septate and loosely coiled. Anthredium possesses two parts (Upper and lower), and it is unicellular, multinucleate and septate. The sexual reproduction of Aspergillus involves the following steps:

Therefore, there are both advantages and disadvantages of the Aspergillus that can cause a huge ecological impact by imposing positive and negative effects.