The pericarp constitutes the edible tissue of fruit. Exocarp, mesocarp, and endocarp are the three distinct layers of edible tissue. In some fruits, it isn’t easy to discern each layer of edible tissue, as the anatomy of fruits differs in varying species.

Pericarp in fruit not only guards the seed during its developmental stages but also helps in seed dispersal. This post mainly focuses on the meaning, three distinct layers and functions of the pericarp, along with some salient features.

Pericarp refers to the fruit wall that develops out of the ovary after the process of fertilization and differentiates into an endocarp (innermost layer), a mesocarp (intermediate layer), and an exocarp (outermost layer). Sometimes, we get confused between the term pericarp and fruit, but both are different. The pericarp is either a dry or fleshy portion of the fruit, while the fruit wholly possesses a pericarp (develops from an ovary wall) and a seed (develops from an ovule). 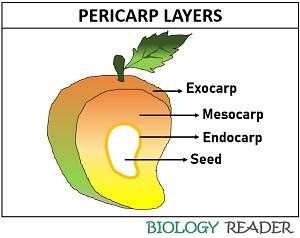 Sometimes, all these layers are difficult to discern in some fruits, as only a few rows of cells are observable. For instance, in fleshy fruits like orange, both epicarp and mesocarp compose the peel portion, while the pericarp layers are not distinctly identifiable in dry fruits.

Epicarp (epi-“on” + carp-“fruit”) accounts for an outmost covering of the pericarp, which constitutes the exocarp. It refers to the differentiated, thin, and tough outermost tissue that forms the fruit rind or peel. In citrus fruits, this particular portion has termed the flavedo.

Mesocarp (meso-“middle” + carp-“fruit”) accounts for a layer intermediary to the layer of epicarp and the endocarp, which constitutes the hypodermis. It refers to the differentiated, fleshy or dry middle layer of tissue that generally forms the edible portion of fruit. For instance, the mesocarp makes up most of the edible parts in fruits like peach, tomato, etc. 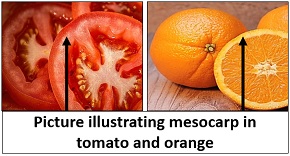 In citrus fruits (orange, citrus lemon, etc.), the mesocarp layer is called albedo or pith. One needs to separate the layer of pith before eating. The inner rind or mesocarp of citrus species is processed to make succade.

Endocarp (endo-“inside” + carp-“fruit”) accounts for an innermost covering of the pericarp, which straightaway encloses the seed. In citrus fruits, the endocarp is the only part consumed and fractioned into some sections called segments. The juice vesicles are tightly incorporated within these segments containing fruit juices.

On the contrary, an endocarp is thick and hard for the stone fruits like peaches, plums and apricots. In dry fruits, it represents the hardcover enclosing the kernel of pecans and walnuts that must be separated before consumption.

Fruits can be of two kinds (true and false), depending upon the origin of the pericarp.

Fruit pericarp mainly helps in the dispersal and protection of seeds.

Pericarp comes in various colours and exudes a delectable odour that significantly helps in seed dispersal. Fruits can be dry and fleshy, so the medium of seed dispersal differs accordingly.

In addition to seed dispersal, an innermost layer or periplasm plays a pivotal role in seed sustenance during developmental stages. We know that an endocarp is in the closest vicinity towards the seed and connected to the placental layer of the ovary through an umbilical structure (funiculus).

The funiculus appears stalk-like and attaches to the placenta on the ovary wall once it reaches the seed coat layer. When the fruit attains maturity, the placental layer of the plant’s ovary eventually fuses with the endocarp.

The endocarp layer often modifies into a hardened pit, which protects the seeds from disease and herbivory. Despite this, it also nurtures the seed during the developmental stages by maintaining a favourable micro-climate.