It is one of the types of steam sterilizers that removes contaminants from the goods like the way a regular pressure cooker does. The products can be made sterile through successive stages of the sterilization cycle, which we will discuss more in detail.

An autoclave is a sterilizing machine that makes the equipment and supplies contaminant-free by maintaining pressurized saturated steam under controlled temperature for desired time. The steam pressure and temperature can change, depending on the size of the load and the contents.

Among chemical, radiation, and gas sterilization methods, a physical means of moist heat sterilization is prevalently used and the most dependable method. An autoclave is a physical medium of sterilization and disinfection that kills the deleterious microorganisms including bacteria, viruses, fungi etc. on the loads inside a pressure vessel.

In the history of autoclave technology, many scientists have contributed that we will discuss below:

After that, the significant advancements in autoclave were made like on control system, autoclave safety, and sterilization cycle.

It depends upon the principle of moist heat sterilization, in which the goods are exposed to direct steam under controlled temperature and pressure for specific time. Thus, autoclaving depends on steam quality, pressure, temperature, and time duration. The autoclave uses moist heat, which kills microbial cells, intracellular structures, spores via absolute denaturation that results into coagulation of enzymes and structural proteins.

Important Parameters of an Autoclave

In operation and maintenance of an autoclave depends upon the following parameters: 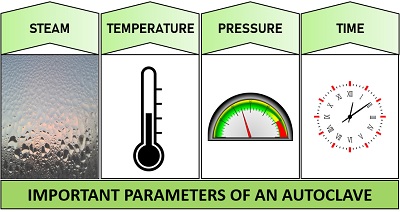 Autoclave uses dry saturated steam under elevated pressure and temperature to ensure potent microbicidal activity. 121°C (250°F) and 132°C (270°F) are the ordinary temperatures maintained in a gravity displacement autoclave and pre-vacuum sterilizer at a standard pressure of 15 and 27 p.s.i, respectively.

The p.s.i (pounds per square inch) is a unit of pressure. If the pressure inside an autoclave is increased above the atmospheric pressure, it will consecutively increase the boiling temperature of the water inside the pressure vessel.

The increase in boiling temperature of the water will turn water into steam by one of its property, i.e. latent heat of evaporation (heat necessary to turn water into steam or vapours). This increases the steam penetration into the objects placed inside an autoclave and also it’s killing ability of microbes.

Quality steam is essential for successful sterilization. The vapour must contain a fraction of 97% steam (vapour) and 3% moisture (liquid water). The steam and moisture ratio is necessary for efficient heat transfer.

For efficient heat transfer, the fraction of stem and moisture must be more than 3%, because if the fraction less than 3% is considered as superheated or dry steam that is ineffective to carry out steam sterilization.

The minimal time requires to sterilize the contents in the gravity displacement autoclave, and pre-vacuum autoclave takes 30 minutes and 4 minutes, respectively, to destroy the microbial cells.

An autoclave is designed to work efficiently to destroy the structural proteins, enzymes, and spores of the microorganisms. Generally, there are two kinds of autoclave, one is gravity displacement, and the other is a pre-vacuum sterilizer.

The working of both the types will differ slightly. In gravity displacement type, the air is removed by a steam-activated exhaust valve, while in pre-vacuum type, the air is drained out via pulling the vacuum pump.

In both models, the air is replaced with pressurized steam at the desired temperature and time to maintain a sterile environment inside. So in this context, we will look into the basic components of the gravity displacement autoclave. The diagram of an autoclave illustrates the simplicity of operation. 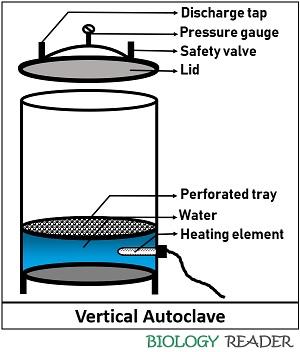 It is the main body that comprises an inner chamber and an outer jacket. An inner chamber is composed of stainless steel, consisting of a tripod stand over which a perforated holding tray is placed. The materials to be sterilized are put over the holding plate.

An outer jacket used in medical setups is generally filled with steam that enters and passes through an operating valve. It flows forward and down through the chamber and reduces the time taken to reach the sterilization temperature. The capacity or size of pressure vessel ranges from 100 L to 3000 L.

It is the second most crucial component of an autoclave that is provided with the following systems:

Water is added into the inner chamber up to the level of the tripod stand. A power cable is attached to the heating rod that is required for steam production. A heating element or boiler is found at the bottom of the pressure vessel that uses a power supply to generate steam from the water.

The level of water is an essential factor that determines the efficiency of the steam sterilizer. There might get some chances of burning the heating element if the amount of water is too less. Similarly, more than enough water might damage the components placed inside.

Autoclaves are used extensively in practical labs, industries, healthcare settings to sterilize different kinds of equipment and media. The items are either wrapped or put directly over the holding plates inside an autoclave chamber under controlled conditions of temperature, pressure, and steam for a specific time.

After that, the pressure is applied to the steam that increases the temperature and killing ability to achieve successful sterilization at the desired time. Hence, the steam is exhausted after the completion of the sterilization, and thereby sterile equipment and media can be taken out. Therefore, depending upon the working of an autoclave, there are three phases in its sterilization cycle:

It also refers as the conditioning phase, in which the air inside the pressure vessel is displaced or removed that may inhibit the sterilization process. Different autoclaves use different methods to remove the air out of the chamber.

It also refers as the sterilization phase when the autoclave’s exhaust valve is closed, and the heating element provides continuous steam into the pressure vessel. It results a rapid increase in the temperature and pressure to the desired setpoint.

Then, the items placed inside the chamber meet the exposure phase, where they are held at sterilization temperature for the desired time depending upon the type and load of content.

It is the final phase when the exhaust valve is opened to release out the steam out of the chamber to depressurize the chamber so that the items on the tray can be taken out.

Therefore, we can conclude that autoclave sterilization is the best way to sterilize culture media, pipette tips, equipment, glassware, etc. It is also useful to inactivate the bacteria, viruses, fungi, and yeasts, etc. in culture plates, medical and surgical wastes via autoclaving prior disposal.