Synchronous culture is a technique of growing microorganisms at the same stage of their growth cycle under controlled conditions. Forced or mechanical selection methods induce synchrony in the microbial culture.

Forced techniques induce synchrony in microorganisms by the shock treatment (temperature variation) or chemical treatment (nutritional difference). In contrast, the mechanical method uses filtration or centrifugation techniques to collect cells of the same age and size.

Synchronous culture refers to the growth process of the microbial population, where individual cells show synchrony with the other cells in the same culture medium by growing at the same growth phase for the given generation time.

The main characteristic of synchronous growth is that all the microbial cells are physiologically identical by growing at the same division cycle and same generation time. Therefore, we can say that the entire microbial population remains uniform concerning cell growth and division.

The Efficiency of Synchronous Culture

Let us see the growth pattern of cells by plotting a graph between doubling time vs a logarithmic number of cells and time vs corresponding mitotic indices for a synchronous and random growth, respectively. 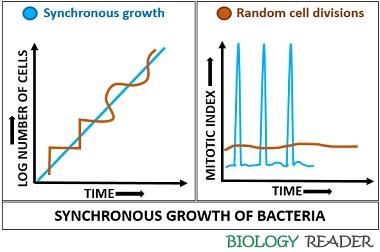 To select microorganisms and keep them in synchrony, there have been two approaches employed based upon the mechanical and induction selection methods.

It refers to a physical separation method, in which the selection of a synchronous population is carried out according to age and size.

To perform this method, you need to filter the microbial cells to separate the metabolically active small and young cells. A filter retains large cells that are ready to split. 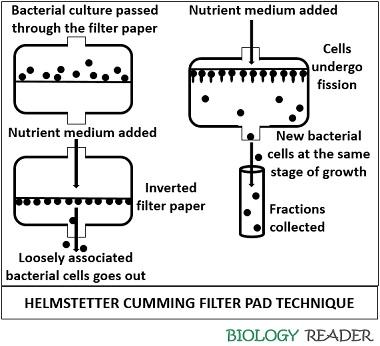 In this method, You need to pass the entire cell population through a filter whose particle size is small, sufficient to trap bacteria. This method uses a cellulose nitrate membrane filter.

Then, collect the sample of this stream, which contains all the newly formed and synchronously dividing cells. The method has one limitation that the population size is petite.

Nowadays, density gradient centrifugation is also used instead of filtration to select microbial cells of the same size and density that can divide at the same stage of their life cycle.

Temperature variation: It is the most common factor that induces cell maturation to the same point of fission.

During this interval, the cells go through maturation to undergo cell division. At 20 degrees Celsius temperature, no bacteria will undergo fission.

But, if you transfer the culture at a temperature of 37 degrees Celsius, all the cells start dividing synchronously. Therefore, the repeated temperature variation can maintain synchrony for a few generations.

The microorganisms grown in the culture medium deficient or containing the essential growth factor may either promote or inhibit the cell division, which eventually withheld the fission.

Let us suppose the bacterial cells are grown in a culture medium lacking thymine (an essential element).  As a result, the process of fission halts for some time. However, the bacterial cells will divide once you transfer the cells to a complete nutrient medium.

Oppositely, the selection synchrony selects cells at a particular stage of the cycle, and later the fractions of bacterial cells grow through their natural cycle.