Adenovirus is a type of DNA virus, which appears medium-sized, non-enveloped and double-stranded. Adenovirus named after its isolation from the human adenoid tissue. It was first introduced by a scientist named Rowe, who cultured and isolated adenovirus via plasma tissue culturing. This group of virus can infect human, animals and birds.

Adenovirus can cause various diseases like respiratory tract infection, lung infections, common-cold, conjunctivitis etc. Adenovirus is ubiquitous, and it can disseminate worldwide. The life cycle of adenovirus is a complex process that begins with host-cell interaction, replication of viroid DNA, protein synthesis, bioassembly and host-cell lysis.

Adenovirus infections are most likely to occur in the late winter, spring and early summer months. It is most prevalent in children (between the age group of 6 months to 2 years) than the adults. In this context, we will discuss the definition, morphology, genome organization and classification of the adenovirus along with its epidemiology, pathogenicity and diagnosis. Besides, you will also get to know about adeno-associated viruses.

Adenoviruses belong to the group-1, ds-DNA human viruses, which usually cause acute respiratory infections and occasionally cause conjunctivitis, cystitis and gastroenteritis. It was first isolated after culturing the human adenoid tissue in the plasma tissue culture, after which it is named “Adenovirus”. It is a member of the family “Adenoviridae”, and it has two generas like:

Host range: Adenoviruses can infect mammals and birds, and they are “Host-specific”. They can rapidly attack the human embryonic kidney, HeLa/HEp-2 cells.

The size of adenovirus is larger than the other viruses, but its structure is quite simple, and it shows the following structural properties: 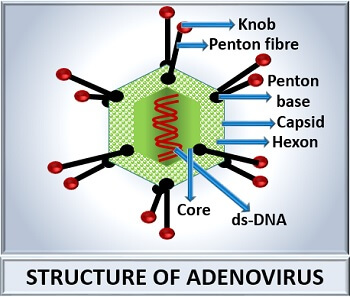 They possess a linear, non-segmented and ds-DNA with a size of 30-38 Kb. The genome produces four types of gene products during gene expression.

The genome of adenovirus also encodes tripartite RNA leader or TPL sequences. Later, the TPL sequences are spliced up by the viral genome onto all the late viral mRNAs. Thus, both the DNA strands code specific genes that perform distinct tasks. Its genome also carries inverted terminal repeat sequences, due to which the denatured single strands transform into a circular or panhandle DNA molecule. To each 5’ end of viral DNA, a protein of molecular weight 55 KD is covalently attached.

The human adenoviruses are categorized into six groups, depending on the properties like haemagglutination, fibre length, oncogenic potential etc. Let us study the six serotypes or subgenus of human adenovirus.

We can study adenovirus epidemiology by knowing all the factors related to the virus that can cause pathogenicity in the host cell.

Adenovirus can cause the following pathogenic diseases:

It is a type of upper respiratory tract infection caused by viral serotypes 1-7.  It is a clinical condition characterized by pharynx inflammation. Pharyngitis includes symptoms like:

Pharyngitis symptoms can last for 3-5 days, and it includes complications like sinusitis and otitis.

Serotypes 3 and 7 cause pneumonia in adults. Type 7 of adenovirus can cause serious illness in infants and young children. It is a clinical condition that causes inflammation in the lungs and also affects alveoli. Pneumonia includes symptoms like:

Pneumonia can last for a few weeks to months and includes complications like asthma, diabetes, heart failure etc. It is also a type of upper respiratory tract infection.

Mostly occur as outbreaks in military recruits and caused by serotypes 4, 7 and 21. It is a clinical condition that infects the nose, trachea and lungs and causes tracheitis, bronchiolitis etc. Acute respiratory infections obstruct normal breathing functions. It includes symptoms like:

For this, serotypes 3, 4 and 11 are mainly responsible that cause inflammation of the conjunctiva, enlargement of submucous lymphoid follicles and preauricular lymph nodes.

Serotypes 40 and 41 have been isolated from the faeces and designated as “Enteric type adenovirus”, which can cause infantile gastroenteritis. Gastroenteritis occasionally occurs and causes inflammation of the intestinal lining. It can be identified by the stool ELISA test.

We can diagnose the pathogenicity of adenovirus commonly by the two methods:

AAVs or Adeno-satellite viruses are other groups of a virus. They depend on the adenovirus for their replication and belongs to the family of Parpoviridae. AAVs are also classified as “Dependovirus”. Through electron microscopy, complement fixation or immunofluorescence methods, we can identify the AAVs. Its pathogenicity is still unknown.