The environmental and nutritional factors may favour or restrict the growth of microorganisms. Some microbes survive in extreme conditions or the changing environment, while few can not thrive. The bacterial growth factors decide the increase in cell size and mass of the bacterial cell.

In this post, we will discuss bacterial growth factors like temperature, pH, oxygen concentration, carbon dioxide, light, and osmotic pressure.

It is one of the most crucial factors which decides the multiplication rate of microorganisms. A temperature can be minimal, optimal and maximal. 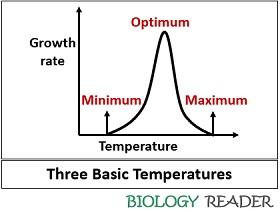 Cardinal temperatures for microbial growth: Microorganisms belong to different groups according to the optimal temperature for division and metabolism. 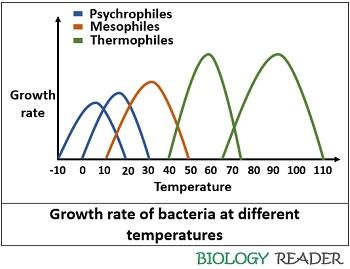 Psychrophiles: The microorganisms belong to this group are “Cold loving”, and they can grow at a temperature of zero degrees Celsius. It includes two subgroups:

Mesophiles: The microorganisms that belong to this group require a temperature in the middle range. They grow best at a normal temperature ranging between 25-40 degrees Celsius. The optimum temperature for the mesophilic bacteria is 37 degrees Celsius. It includes commensals, saprophytes, plant parasites etc.

Thermophiles: The microorganisms that belong to this group are “Heat-loving”, where these show optimum growth at a temperature between 50-60 degrees Celsius. Many thermophilic organisms cannot grow below 45 degrees Celsius.

The bacteria belong to this group can adapt themselves to live in harsh environment like hot springs, sunlit soil, compost piles etc. Some thermophilic bacteria also possess heat resistance endospores.

Thermophiles or hyperthermophiles represent another group, which grow best at a temperature of 80 degrees Celsius or above. Thermophilic bacteria like Archaebacteria, Thermus aquaticus predominate in volcanic and ocean vents.

Bacteria are sensitive to various pH range. The bacterial species that grow at a pH range above or below the preferred value would not survive. But, bacteria at optimum pH show the best growth in nearly neutral pH, i.e. 6.5-7.5.

The acidic pH usually restricts microbial growth, and it is frequently used in food preservation methods. The basic pH also inhibits microbial growth. To stabilize the pH, buffers are generally used. Therefore, depending upon the pH range, the organisms can be grouped into three categories: 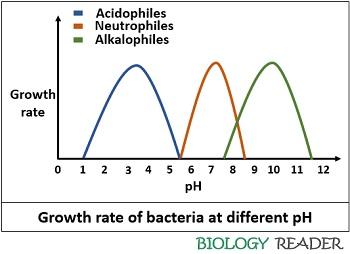 Microorganisms can adjust to changes in the environment pH by maintaining an internal pH that is near neutrality. Some bacteria also synthesize shock proteins in response to pH. The pH of the medium also determines which pathway of metabolism will come into action.

The bacterial species that use molecular oxygen (O2) produce more energy from nutrients than anaerobes. Oxygen functions as a terminal electron acceptor for an electron transport chain during aerobic respiration. Based on oxygen concentration, the microorganisms can be categorized into the following types: 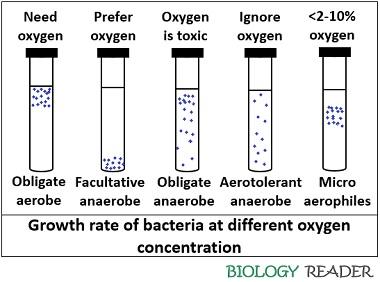 Oxygen can easily reduce toxic products like singlet oxygen and hydrogen peroxide. Singlet oxygen is an extremely reactive form that prevalently occurs in phagocytic cells. Hydrogen peroxide ion is also toxic, which can be broken down by the two enzymes, namely catalase and peroxidase.

Superoxide free radical is an extremely toxic and reactive form of oxygen. The organisms growing at this temperature include aerobes, facultative anaerobes and aerotolerant but not anaerobes or microaerophiles.

The group of bacteria, which utilizes a higher amount of CO2 for their growth, refers to capnophilic bacteria (H. influenzae, Brucella abortus, etc.). For their optimum growth, they require the presence of 5–10% CO2 and 15% O2. In a candle jar, 3% CO2 can be achieved. Capnophiles found in the normal flora of some ruminants.

It is another factor that affects the bacterial growth, and those bacteria which makes the use of light source can be classified as:

Phototrophs: It refers to a group of bacteria, which derives energy by capturing photons mainly from the sunlight. Phototrophs can be either classified into autotrophs (fix carbon) or heterotrophs (utilizes carbon). Examples: Rhodobacter capsulatus, Chromatium, Chlorobium etc.

Chemotrophs: It refers to the group of bacteria, which derives energy by oxidizing electrons primarily from chemical sources. Organic (chemoorganotrophs) or inorganic (chemolithotrophs) are the two common types. These predominate in the ocean floors where the sunlight cannot reach.

Microbes require minerals or nutrients for their growth, which can be obtained from the surrounding water. Osmotic pressure and salt concentration of the solution can influence bacterial growth. The bacterial cell wall gives a mechanical strength that allows the bacteria to withstand alternations in the osmotic pressure. 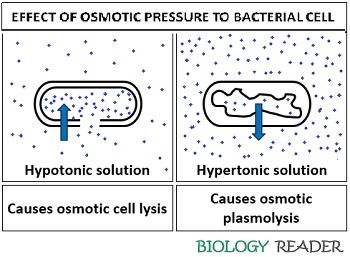 Osmophilic bacteria require high osmotic pressure. When the bacterial cell is subjected to the hypertonic solution, it may cause osmotic water removal, resulting in plasmolysis or osmotic shrinkage of the protoplasm.

In contrast, when the bacterial cell is subjected to the distilled water from the high concentration, it may cause excessive water imbibition resulting in plasmoptysis or cell bursting.