The production of penicillin is practised commercially to treat various infections caused by gram-positive aerobic bacteria. Penicillin is a narrow-spectrum antibiotic or effective against many gram-positive bacteria, especially Streptococcus and Staphylococcus species.

It uses the fed-batch culture method. Penicillin is produced as a secondary metabolite by using living microorganisms, which is then recovered from the feedstock solution. Its production is medically important to cure infections caused by the gram-positive Staphylococci and Streptococci species.

It refers to one most important antibiotics, which requires fungal strains (Penicillium notatum or Penicillium chrysogenum). It acts as a cell wall destroyer of bacteria. Penicillin originated from the Latin word Penicillium, which means “a painter’s brush” as the fronds of fungus were looked like a painter’s brush.

Nowadays, many derivatives of penicillin are available to kill the majority of bacteria than penicillin. Although, it is useful in killing different types of bacteria like Streptococcus pneumoniae, Listeria species, etc. 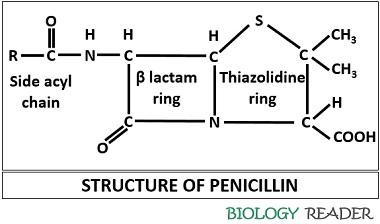 The β lactam ring is responsible for antimicrobial activity and useful to destroy the cell wall synthesis of gram-positive bacteria, especially Staphylococcus and Streptococcus species.

Penicillin G serves as a secondary metabolite, which generally forms during the stationary phase. Below, you can see some of the physical and chemical properties of penicillin G.

A scientist named Alexander Fleming (Professor of Bacteriology) introduced penicillin in the year 1928. Once, he cleaned his messy lab and observed that the Petri dishes cultured with Staphylococcus bacteria were contaminated with mould.

Most of the antibiotics follow the same method for commercial production. Majorly, the difference in the production process lies in the following three factors:

The industrial production of penicillin includes the following steps: 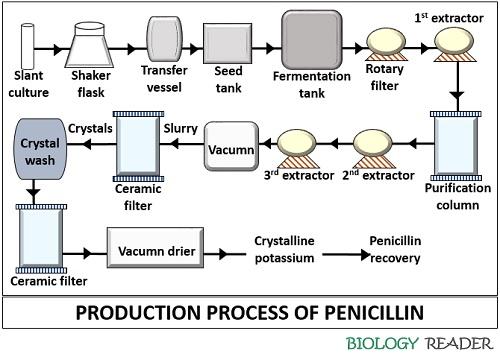 Preserve the culture of P. chrysogenum strain as a lyophilized spore. Firstly, culture the P. chrysogenum into a flask for seven days at a temperature of 24 degree Celsius with a wheat bran nutrient solution. After this phase, we can get a high yield strain of P. chrysogenum.

Add inoculum into a fermentor filled with production medium or feedstock solution containing the following constituents:

Then, set the pH to 6.0 and temperature between 25-26 degree Celsius. The fermentation process requires aerobic conditions. For adequate nutrient supply, you need to maintain regular feeding in a fed-batch culture system.

The fermentation process requires one week for penicillin production. Initially, the mycelial growth utilizes the available carbohydrates, thereby reducing the carbohydrate level in the culture medium.

Because of the reduced carbohydrate level, penicillin production begins from the 2nd day of fermentation. Then, by the end of the 7th day, the pH of the medium rises to 8.0, and the production of penicillin stops.

Extract penicillin G from the broth by using organic solvents. After purification, we obtain penicillin G as a potassium salt, which later transforms into 6-aminopenicillins acid (6-APA). Industrialists can produce different derivatives of penicillin by modifying the side chain of 6-APA.

Therefore, penicillin production is a vital process in medical biology, as it functions as an antibiotic that inhibits bacterial activity or infections caused by various gram-positive microorganisms.

1 thought on “Production of Penicillin”