Catalase test is one of the biochemical analysis that generally comes into use in identifying the organisms (whether they are catalase producers or not). It is primarily used to distinguish between the two classes of gram-positive bacteria, namely Staphylococcus and Streptococcus species.

Thus, catalase functions as an antioxidant that breakdown the toxic oxygen reactive species inside a cell to produce non-toxic products like H2O and O2.

A catalase test refers to a biochemical analysis of microorganisms that generally discriminates the two different forms of bacteria, namely aerobic and anaerobic, based on the oxygen requirement. Aerobic bacteria require oxygen for their growth, and they metabolize oxygen into many reactive oxygen species, like superoxide anion, peroxides, hydroxyl radicals etc.

The reactive oxygen species within the cells can lead to oxidative damage in the intercellular contents (cell organelles, DNA etc.). The organisms possess catalase enzyme, which can grow in an oxygen-rich environment. Catalase protects the microorganisms from oxidative stress by the oxygen reactive forms.

Anaerobic bacteria include two sub-groups, like facultative and strict anaerobes. Facultative anaerobes can grow in the presence or absence of oxygen, and they may also contain catalase enzyme, whereas obligate anaerobes lack such enzyme.

Before moving into the theory of the catalase test, we must be aware of specific terms that we will go through in this article.

It is an enzyme that is ubiquitous or present in almost all living organisms. Catalase enzyme belongs to the class of “Peroxidases” that functions as an antioxidant agent. It comprises four polypeptide chains, which splits the toxic hydrogen peroxide into non-toxic oxygen and water. Thus, a catalase enzyme works as a detoxifying agent by defending a cell in counter to the oxidative damage by hydrogen peroxide.

It is a toxic by-product, which forms as an outcome of cellular respiration. The peroxide ion or H2O2 acts as a strong oxidizer, which oxidizes protein, membrane lipids etc., that ultimately causes cell apoptosis or death (if not removed quickly). Superoxide plus hydrogen ion forms hydrogen peroxide via the enzymatic activity of superoxide dismutase.

The principle of the catalase test is based on the rapid detection of catalase presence, which becomes evident by the formation of copious gas bubbles. Catalase positive organisms can detoxify the toxic effect of  H2O2 by the catalytic activity of catalase. 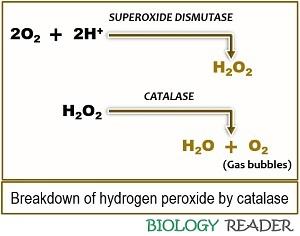 Oppositely, catalase-negative microorganisms cannot decompose H2O2 as they lack catalase. The catalase test involves the mixing of inoculum with hydrogen peroxide. If the test organisms contain catalase, they can easily degrade H2O2 into H2O and O2 (in the form of bubbles). There will be no formation of gas bubbles if a test organism lacks catalase.

The catalase test can be performed by two standard methods, namely the tube and slide method.

It involves the following sequential steps:

It involves the following sequential steps:

Negative result: There will be no formation of oxygen bubbles.
Example: Streptococcus sp, Enterococcus sp etc. 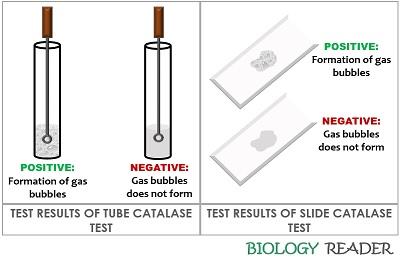 Therefore, the catalase test is a prevalent method to differentiate between different groups (aerobic and anaerobic), species based on the production of catalase enzyme.