What are the characteristics of mushrooms? All mushrooms are fungi. However, all fungi cannot be mushrooms. So, they belong to the Kingdom of fungi and differ from plants and animals.

The young or baby mushrooms bud off through primordium and are called pinheads. Mature mushrooms are the fruiting bodies called sporophores. They vary significantly in size, colour, and shape.

Not all the mushrooms are edible. But, most edible mushrooms belong to two major classes, basidiomycetes and ascomycetes.

This post will give explicit information about the general characteristics of mushrooms, like appearance, growth, nutrition, types and so forth.

Let’s talk about the structural characteristics of mushrooms.

What do mushrooms look like? Looking at the mushroom, you will notice a short stalk or stem with a disc-shaped cap. When you look underside the opened cap, you may see a series of closely spaced slits called gills. Numerous pores occupy the space between the gills that hold spores.

What are the parts of mushrooms? If you ask someone to describe a mushroom, you will hear the same thing we discuss here. 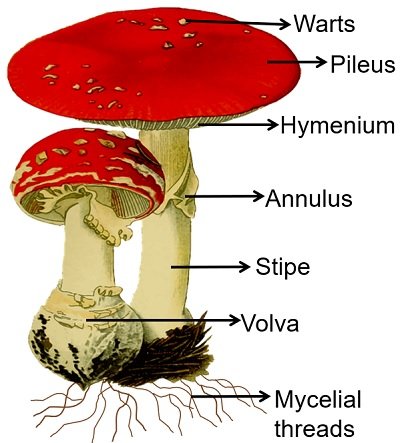 It is the stalk of a mushroom, supporting the mushroom’s cap. Stipe is the technical term to indicate the stem of a mushroom. Sterile hyphal tissues line up the stipe.

You can easily pull apart the cap and the stem. The stem can be rigid, smooth or hollow. The colour, interior flesh and surface texture of the stipe differ.

It appears to be a cup-like structure. The volva is at the base of the mushroom’s stipe. It is a remnant of the universal veil. The volva is a membrane temporarily enclosing the immature mushroom or primordium.

This membrane ruptures as the mushroom’s stipe grow. This structure is common in the mushrooms of the phylum basidiomycota.

It appears as a ring-like structure. The annulus is the membrane encircling the stipe and present under the cap.

It is a remnant of a partial veil. The annulus is a membrane that covers the gills of the immature mushroom. This membrane ruptures as the cap grows.

It is the top portion of the mushroom. Cap of mushrooms could be of various shapes and colours. Pileus is a technical term that indicates the cap.

It usually resembles a headdress that covers or protects the gills. Colour and shape of the cap change when it ages. The surface texture can be fuzzy, warty, slimy, or smooth.

It is a technical term that indicates the gills of mushrooms. Gills appear as the vertical plates arranged radially underside the cap. These are the structures housing spores.

As the spores mature, the colour of the gills changes. The spacing between the gills may differ depending upon the mushroom’s species. The gills may or may not be attached to the stem.

Hypha is a white microscopic filament formed after spore germination. It absorbs the water and organic matter required for mushroom development. Mycelium is a web-like structure formed by the tangling of hyphae. It is the portion developing the aboveground part of the mushroom.

What is the suitable environment for mushrooms? Mushrooms can flourish in lawns, plant surfaces, compost heaps and many other places.

So, there should be an optimal temperature for mushroom colonization. Mushrooms need all these right conditions to form healthy, well-formed fruiting bodies.

Why are mushrooms called heterotrophs? Unlike plants, mushrooms are heterotrophs, or they don’t photosynthesize. So, to get food, they solely depend upon the other organisms. Mushrooms rely on organic food sources in the surrounding, like animal waste and plant matter.

Are all mushrooms edible? Not all the mushrooms are edible. Based on edibility, mushrooms fall into three categories that are as follows:

These macrofungi are safe to eat and offer high nutritional values and delicious taste. Edible mushrooms can be harvested wild or cultivated. They include oysters, morel, portobello and button mushrooms etc. 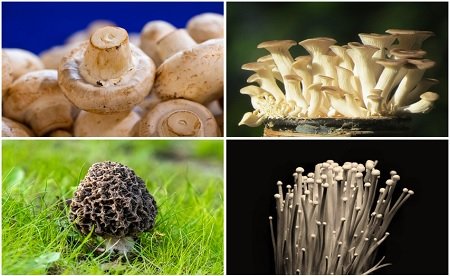 Inedible mushroom species are unappetizing or have poor taste. These have leathery, rugged textures and a peppery or bland taste. They generally taste like eating wood or a leaf.

They won’t cause severe illness but are likely to cause gastric upset. Inedible mushrooms closely resemble poisonous mushrooms and cannot be consumed.

They contain toxins that protect against hungry wildlife. Ingestion of such mushrooms can cause gastrointestinal illnesses, lung and kidney damage, or sometimes death. The poisonous types include Amanita, Cortinarius, Hypholoma species etc. 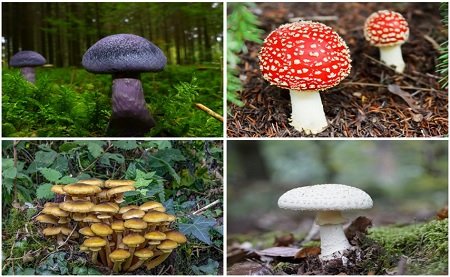 What are mushroom spores? They act as reproductive agents that help in forming a new vegetative body. Spores are dispersed through air and fall on a suitable substrate to produce a new mushroom.

In plants, we have seen reproduction through seeds. In mushrooms, the reproducing units are the tiny, microscopic spores through which they reproduce.

A single mature mushroom can produce trillions of such individual spores. The mushroom’s spores are delicate, dark, dust, microscopic and usually single-celled.

Spores come in various shapes and sizes due to various mushroom species. As we discussed, most mushrooms are from the two phyla, Basidiomycota or Ascomycota. These two phyla have different spore-bearing structures.

It’s fascinating the way mushrooms assure reproduction by releasing spores through different strategies. The wind blows most spores away that lastly fall on the ground.

Yet, some mushrooms use other strategies. For example, the spores of Clathrus ruber or red cage mushroom are driven by insects. As the mushroom matures, the spores liquefy. The rotten meat odour of such mushrooms attracts insects, and their body becomes saturated with liquified spores.

How do mushrooms reproduce? As discussed above, spores are the reproducing units of mushrooms. First, spores germinate into hypha, which later turns into mycelium. Eventually, the mycelium develops a primordium that buds off into a mushroom. 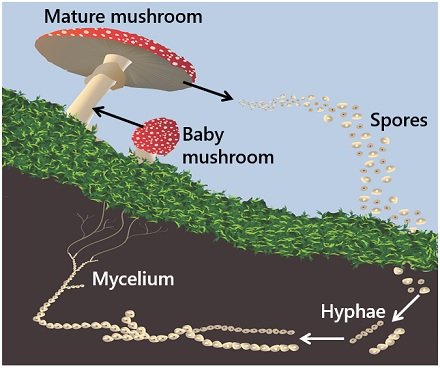 When wind-driven spores fall on suitable ground, they germinate to produce a thread-like structure called hypha. The hypha branches out when it grows in search of a compatible partner.

Eventually, the hypha connects with a separate hypha once it finds a compatible spore. So, if we are talking about sexual reproduction, mushrooms don’t have male and female structures. Instead, they have positive and negative mating types.

Genetic exchange occurs between the two compatible hyphae. Now, the hypha has the complete information to become reproductive. Eventually, both the hyphae tangle to form a web called mycelium.

It is the parent organism of mushrooms that lives underground as white fluffs. Mycelium can grow over great distances, as much as 1,500 acres. It is a vegetative part, functioning as the ‘root system’ for the mushroom.

Mycelium is the structure facilitating nutrient and chemical exchanges. Hyphae form an incredibly vast network under the ground called the ‘mycelial mat’.

Mycelium twists itself into a hyphal knot or primordium that looks like a baby mushroom. Once the ideal conditions line up, the primordium buds off into a mushroom.

It continues to develop and starts to grow up. Some mushrooms are predeterminate, and some are indeterminate.

Once the mushroom matures, there a time comes when they produce spores. Mushrooms release spores at a favourable time in the right way using different strategies. A mushroom’s spores germinate into a dense mycelium network, which continues to spread life busily.