Interaction of host tissue with the fungus shows a non-specific kind of response. Macrophages and neutrophils play a significant role to create an immunological response against this disease. Chromomycosis is sometimes interchangeable with the terms chromoblastomycosis or phaeohyphomycosis.

Dematiaceous fungi include Fonsecaea pedrosoi, Phialophora verrucosa, Cladosporium carrionii etc., that may enter the subcutaneous tissue through the skin surface. In this context, you would get to know the causative agent of chromomycosis disease along with its distribution, risk factors, clinical features, diagnosis and treatment.

Dematiaceous fungi are the aetiological agents, which belong to the phylum “Ascomycota” and order “Chaetothyriales”. Dematiaceous fungi undergo cell division meristematically, not through budding. They cause septation that infects the subcutaneous tissue.

The transmission of the fungus generally results via autoinoculation, i.e. through scratching the infected site to the other parts. A group of dematiaceous fungi are ubiquitous in soil, plants and plant debris. Thus, barefoot agriculture workers and woodcutters are highly affected by this disease.

Chromomycosis mainly occurs in subtropical and tropical regions like Asia and America. Many cases resulted in Mexico, Cuba etc. and outside the American continents (first case in 1927). In Africa, most cases were reported in Madagascar and South Africa. In Asia, chromomycosis is more prevalent in countries like Japan, Sri Lanka, India etc. Thus, the distribution of chromomycosis is worldwide.

Chromomycosis is more prevalent in males having an age limit between 30 and 50 years and those engaged in agricultural activities. A person with HLA-A 29 antigen is ten times more susceptible to this disease.

The occurrence of the disease is more common to the site of lower limbs, as it is in direct contact with the soil, plants, debris which might carry the fungal spores.

The most common feature of chromomycosis is the appearance of sclerotic lesions on the skin. The disease mainly affects the upper limbs, lower limbs and buttock area.

Initial stage: Small red or grey bump appears during the initial stage, and eventually warty dry nodule appears called “Primary lesions”. The formation of lesions is confined to the subcutaneous tissues of the feet and lower legs.

The size and shape of the warty lesions vary from person to person. The disease progresses very slowly and may take up to 10 years from the infection to the diagnosis. Based on the morphological features, a lesion can be of five types: 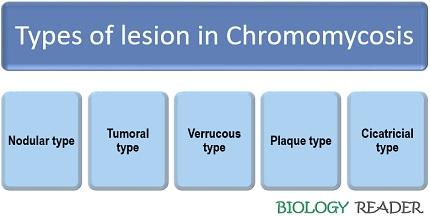 It occurs most frequently. Nodular type lesions are characterized by the following features:

It is characterized by the following features:

The appearance of hyperkeratotic lesions shows a sign of having verrucous chromomycosis that usually occurs in the upper or lower limbs. It most frequently affects the edges of the feet.

It occurs very frequently with various shapes and sizes. Plaque-type lesions are reddish to violet in colour with a scaly surface.

It results in annular and arched lesions in the substantial areas of the body.

Complications: The complications of chromomycosis involve secondary infections and ulcerations. In severe cases, it leads to lymphoedema and ankylosis. Chromomycosis results in swelling of limbs, which leads to elephantitis. The lesions become carcinogenic that results in the development of squamous cell carcinoma. Fonsecaea pedrosoi also cause brain abscesses.

Based on the severity, chromomycosis is classified into three types: 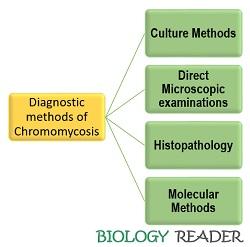 Culture method: You need to culture the sample of the infected site in selective media like Sabouraud agar media (SDA) supplemented with cycloheximide. On standard media, chromomycosis can be characterized by the slow growth of black colonies. For further assessment of the disease, the slide culture method is usually employed to determine the microscopic features.

Its treatment involves the following chemical and physical methods.

It includes treatment of chromomycosis with antifungal agents like:

Chromomycosis or chromoblastomycosis is a subcutaneous infection that primarily results in the formation of dark coloured sclerotic cells over the skin surface. Its treatment becomes necessary because untreated chromoblastomycosis may lead to squamous cell carcinomas (a skin cancer type).