To obtain a pure metal from ore, the method of ore concentration is a very crucial step. For the extraction of metal, it is necessary to separate ore from the gangue particles. Ore found in the earth contains many impurities like sand, grit, rocks etc. which are collectedly known as “Gangue”.

The concentration of ore is the first step of metal extraction. There are different types of ore like native, oxidized, sulphurized and halide, which can be concentrated by various physical and chemical methods.

Definition of Concentration of Ore

Ore can define as a solid substance (like a rock) that contains minerals or combination of minerals, from which the metal can be extracted by a series of methods like the concentration of ore, isolation of metal and refining of the metal.

Ores can be classified majorly into four types:

Methods of the Concentration of Ore

As the ore is found in the earth’s ground surface, it contains unwanted earthy materials like rocks, sand, silt, and many other impurities colloquially termed as gangue. The concentration is basically the separation of something useful out of worthless. Thus, by concentrating ore from such impurities, we can actually extract and refine metals. Various physical and chemical processes are employed to concentrate or separate ore from the gangue matrix.

It was the traditional method of concentrating ore directly with hands. In this method, the gangue or adhering solid matrix is separated from the ore with a hammer’s help. The separation and identification of gangue are made based on the differences in colour or lump shape.

It is also called “Gravity separation” or “Levigation”. In the hydraulic wash, the ore is separated from the gangue by the principle of gravitational force. The ore is first crushed into fine particles or powdered form. Then, the powdered ore is passed through the water current. 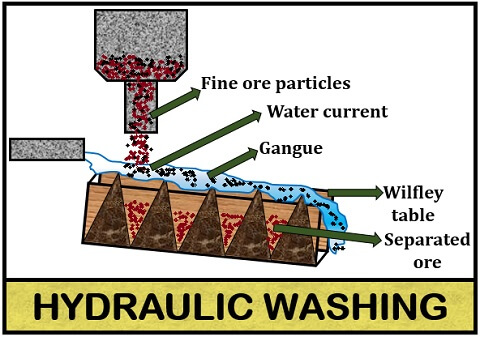 As the ore is more substantial than the gangue particles, it will settle behind, and the gangue will float away through the stream of water. The process of hydraulic washing is accomplished by “Hydraulic classifier” or “Wilfley table”. This method is widely used for the concentration of oxide and carbonate ores.

The magnetic separation method separates ore from the gangue particles based on the magnetic properties of either ore or matrix. In this method, the ore is finely crushed and passed over the magnetic roller, where one is magnetic, and the other is nonmagnetic. 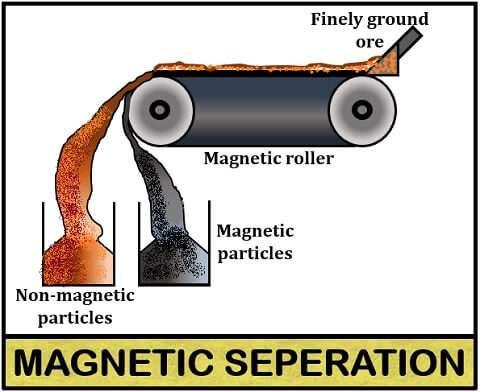 In this process, finely ground ore or we can say pulp of ore is passed into the bioreactor along with little oil. The oil which is generally used in the froth floatation process is pine oil. The bioreactor contains water onto which the mixture of ore plus oil is added through an inlet. 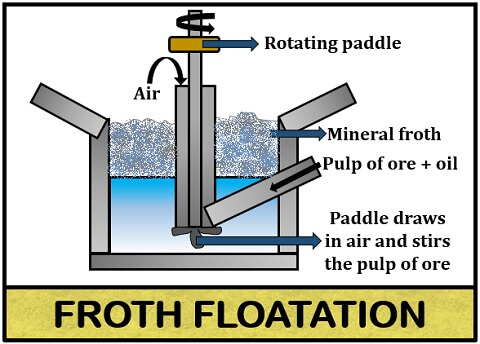 Then, the mixture of ore, oil and water is thoroughly mixed or agitated by the rotating paddle (comprises impellers) that allows uniform mixing of all the components. There is constant airflow inside the medium, which leads to the formation of mineral froth (appears as a supernatant). Froth contains mineral particles that can be collected by transferring the mineral froth into the other bath, in which the ore free from gangue will settle down.

The chemical methods include calcination, roasting and leaching for the concentration of ore.

It is the chemical method of separating carbonate or hydrated oxide ores.

It is a process generally applicable for the sulphide ores under the influence of the heat and air. In roasting, the sulphide ore is heated at the temperature below the melting point. For example:

It is a chemical method, in which the ore is treated with the suitable reagent to solubilize the ore.

The soluble ore or mineral can be separated from the insoluble gangue. After the separation of ore, it can further be recovered by several chemical methods.

1 thought on “Concentration of Ore”