The difference between colloid and solution is due to the properties like the solubility of particles, chemical nature and light scattering property. Colloids form when the particles (diameter from 1-1000 nm) are suspended in the dispersion medium. Oppositely, a true solution forms when the solute particles (diameter less than 1 nm) completely dissolve in the solvent.

The solubility of solutes in the solvent has a varying affinity. Thus, depending upon the degree of affinity between particles, colloids and solutions are the resulting mixtures. This post describes the key differences between colloid and solution, along with the comparison chart. You will also learn the definition, properties, types, examples and similarities between the two.

Definition of a Colloid

A colloid is a heterogeneous mixture with suspended solute particles in the gas, liquid or solid dispersion medium. Thus, a colloidal system has two distinct phases. A dispersed phase contains suspended particles, and a continuous phase is the suspension or dispersion medium. 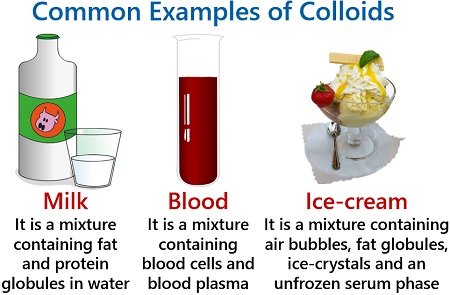 Definition of a Solution

A solution is a homogeneous mixture with one or more solute particles in the solvent phase (either gas, liquid or solid). Thus, a solution is a mixture containing two components (solute and solvent). The solute is a compound that dissolves in a solvent, whereas the solvent functions as the dissolving medium. 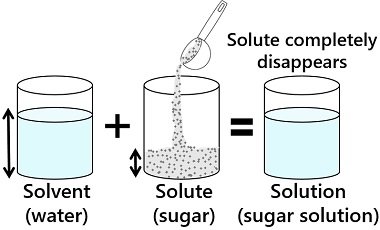 The solute particles in the dissolving medium or solvent have a diameter of less than 1 nm. A solution is also known as a “True solution” due to its homogeneous nature. Let us look into some common examples of solutions. 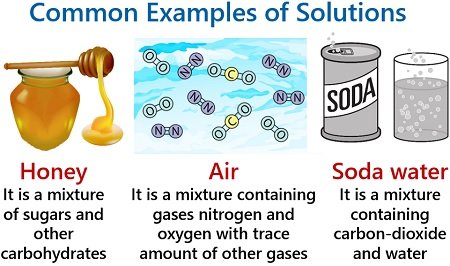 Honey is a homogeneous mixture containing sugars (fructose and glucose) and other carbohydrates. Air is a mixture comprising gases like nitrogen and oxygen with other gases in trace amounts. Soda water is a solution containing carbon dioxide and water.

Properties of a Colloid

Physical property: A colloid is a heterogeneous mixture with two or more phases. The particle size of colloids is intermediate between the solution and suspension (generally ranges between 1 nm-1 mm). 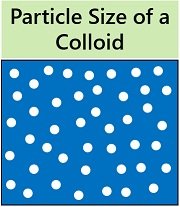 Suspended particles are immiscible in the dispersion medium. Colloids have a unique feature by exhibiting Brownian movement (dispersed phase particles move in a zig-zag pattern due to constant collisions. 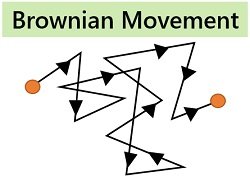 Optical property: Colloids possess a light scattering property or exhibit the Tyndall effect. Uniformly suspended particles of colloidal solution reflect or scatter the light coming into its path. Through this property, we can differentiate between a true solution and a colloidal solution. 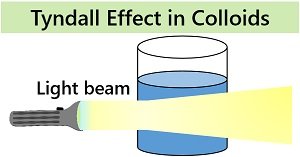 Mechanical property: Colloid particles are pretty stable or do not settle down at the bottom upon standing. However, through centrifugation, the colloidal particles sediment at the bottom. Dispersed particles of a colloidal system penetrate the filter paper but not the parchment paper.

Properties of a Solution

Physical property: A solution is a homogeneous mixture containing solute and solvent. The particle size of solutes in a solvent is generally less than 1 nm. 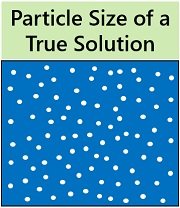 Solute particles are miscible in the solvent or dissolving medium. A true solution possesses solute and solvent phases, in which a solvent phase decides the physical state of a solution (solid, liquid or gas).

Optical property: A true solution has no Tyndall or light-scattering effect. A beam of light is invisible and unreflected when passed through the homogenous mixture.

The classification and examples of colloids are given in the table based on the dispersed and continuous phase particles.

The classification and examples of solutions are given in the table based on the solvent phase particles.

Key Differences Between Colloid and Solution

Solutions and colloids are the resulting mixtures, depending upon the variable solubility of suspended and solute particles in the dissolving medium and dispersion medium.