Water is a solvent that dissolves a variety of substances. It is considered the universal solvent because it can dissolve compounds (like polar molecules and ions) than the available solvents. Its physical and chemical attributes make it an excellent solvent.

The chemical formula of water is H2O, i.e. it contains two H-atoms and one O-atom. The atoms are held together via a polar covalent bond due to the uneven distribution of electrons.

It gives a partial negative charge to an O-atom and a partial positive charge to the H-atoms. Water can dissolve any substance with charged particles or electronegative atoms.

This post describes the physical and chemical characteristics of water that make it an excellent solvent. Also, you will get to know the examples to understand each property of water better.

The polar nature, dissociation and ionizing properties of water are ideal for a good solvent.

Two hydrogen atoms and one oxygen atom of H2O share electrons by forming a covalent bond. But, one pair of electrons is shared unevenly between two atoms, or the sharing is not equal.

A total of four pairs of electrons are around the oxygen atom, in which:

The unequal sharing of electrons gives a partial negative charge to an O-atom and a partial positive charge near H-atoms. For this reason, water is considered a polar molecule. 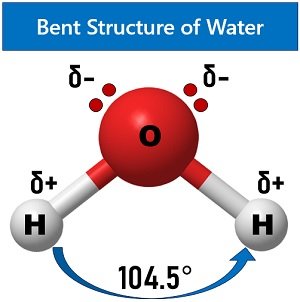 The shared or unshared electrons repel each other, bending the O-H bond away from the linear angle. For this reason, water has a bent structure.

Above, we have discussed the polarity of water. Now it’s time to study the property of dissociation or hydrolysis of compounds by water. Water molecules in an aqueous phase will interact or form a weak intermolecular bond.

The formation of a weak hydrogen bond between water molecules is due to a partially positive hydrogen atom and a more electronegative oxygen atom.

Thus, the attraction of the positive towards the negative allows water molecules to interact, making a cohesive structure. The water’s partial charges cause the dissociation of various polar molecules or ions, making them soluble in water.

Dissociation of complex compounds gives off simpler constituents (atoms or ions). So, water as a solvent can solvate other polar and ionic compounds.

The charges associated with these molecules form hydrogen bonds with water. Then water molecules surround the dissociated ions by forming a sphere of hydration.

The hydration shell is a structure, in which water molecules encircle ions in an aqueous solution. This shell keeps ions dispersed in the water.

Ionic compounds or salts like NaCl, NaOH etc., are polar in nature. Unlike water molecules, ionic compounds have an ionic bond. Once polar ionic compounds react with water, they dissolve or give off their ions to become a part of a solution.

Due to stronger covalent O-H bonds in water, the ionic bonds in salt molecules break, by giving ions in water. Then individual ions interact with the polar regions of water by forming a hydration sphere.

When NaCl reacts with water, it dissociates into its respective ions. The slightly electropositive ion attracts toward the electronegative O-atom of water.

At the same time, the slightly electronegative ion attracts the electropositive H-atom of water. The attraction between the dissociated ions and water molecules set up a “tug-of-war“.

The stronger covalent O-H bonds in water win out, causing ionic compounds to pull apart. Finally, anions and cations of ionic compounds are set loosely in place between the intact water molecules. 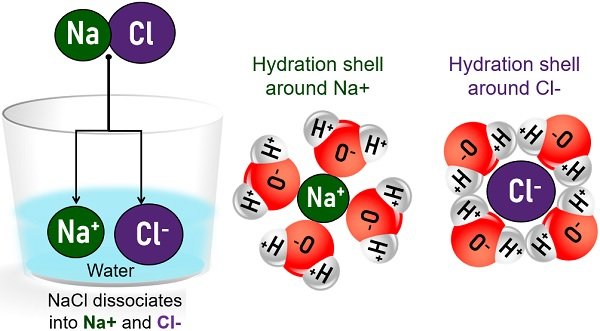 NaCl crystals react with water and dissociate into Na+ and Cl– ions. Later, a sphere of hydration forms around the ions.

This interaction dissolves NaCl in water or causes solvation of NaCl. We can predict the solubility of salt by following a set of empirical rules: 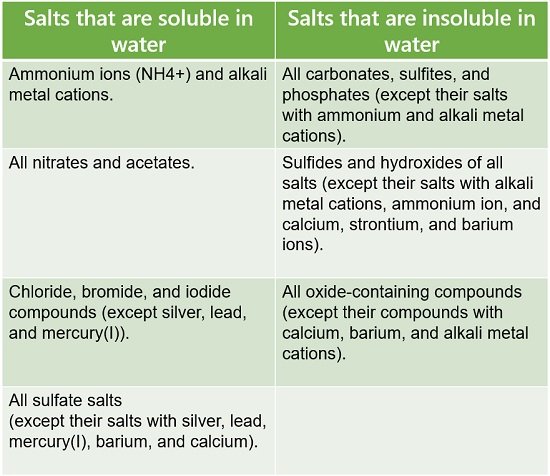 Many polar molecules are either polar or charged. They act as hydrophilic molecules and are easily dissolved in water. But, compounds like oil, waxes and lipids contain hydrocarbon chains that repel water molecules.

Polar molecules (like HCl, NH3 etc.) have covalent bonds with unequal charge distribution. Their atoms have differing electronegativities and are thus soluble in water.

They have dipoles on their atoms that interact with the dipoles on water molecules. Polar covalent molecules include ammonia, hydrochloric acid, ethanol, methanol, glucose etc.

Examples: Ammonia is a polar covalent molecule that is very much soluble in water. It has one nitrogen atom covalently bonded to three hydrogen atoms. 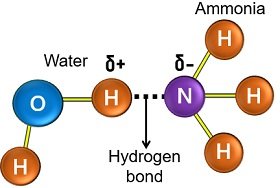 It allows the interaction of a nitrogen atom with water via a hydrogen bond. The ammonia dissolves in water and forms a basic solution.

Ethanol is also a polar compound that can be soluble in water. Its -OH group is hydrophilic (water-loving), while the C2H5 group is lipophilic (fat-loving). The partial positive H-atom of water interacts with the -OH end by forming a hydrogen bond. 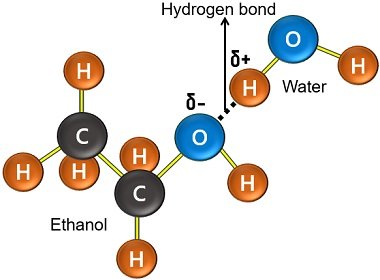 It occurs between the water and hydrophobes (nonpolar or low water-soluble molecules). Hydrophobes have a long chain of carbons that are hydrophobic (water-hating).

Example: Interaction of fat or oil and water.

Fat molecules clump together and have minimal contact with water. When nonpolar molecules react with water, the water changes its hydrogen bonding patterns around the hydrophobic molecules. Eventually, this interaction forms a cage-like structure called a clathrate. 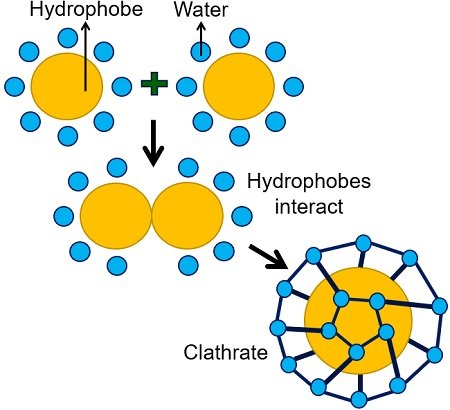 Pure water exhibits a property of self-ionization. Water molecules can easily break up into H3O+ and OH– ions in the following way:

Here, the H3O+ and OH– ions are produced in equal amounts with the same concentration. The property of self-ionization is also known as auto-pyrolysis of water.

The above reaction represents the amphoteric nature of the water, in which water can act as an acid (donates proton) and a base (accepts proton).

The property of self-ionization in water helps in the dissociation of ionic compounds into cations and anions.

Water has a maximum dipole moment (1.84 D) than other solvents. It has a permanent dipole moment due to the presence of O-H bonds. Water can cause the ionization of polar compounds and ions.

Water has a high affinity of association, as they happily interact with each other through intermolecular H-bonding. This increases the effective surface area of the water molecule and results in a high boiling point. 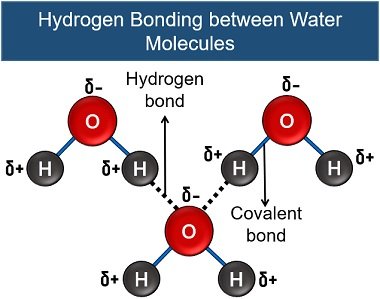 So, the water can exist as a liquid state in a wide range of temperatures (0 to 100 degrees Celsius). Thus, this property also makes the water a suitable solvent.

Viscosity is a measure of a fluid’s resistance to flow. Low viscous solvents are considered best than high viscous solvents. Particles coagulate easily in solvents with high viscosity, and they can not be resolved or reused. Water has a low viscosity of 1.0 centipoise at a temperature of 20 degrees Celsius. 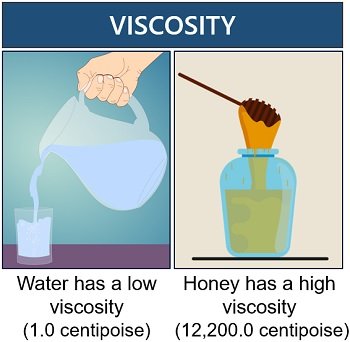 Water is an electrically neutral molecule because of the same concentration of H+ and OH– ions. A water molecule has a zero net charge due to 10 protons and 10 electrons. It has a positive area at one end and a negative area at the other, thus contributing to the polar nature.

Besides the property we discussed above, water is readily available in nature and is non-poisonous. These two ideal properties also make water a good solvent.