The dicot leaves are non-linear, unlike monocot leaves and the vascular bundles in them are irregularly arranged in the net-like veins. These are hypostomatous, i.e. possess stomata on one side (lower epidermis) and have reticulate venation patterns. Dicot leaves comprise the mesophyll differentiated into compactly-arranged palisade and loosely arranged spongy parenchyma cells.

The monocot leaves are generally linear or oblong and the vascular bundles in them are parallel arranged in the striated veins. These are amphistomatous, i.e. possess stomata on both the sides (upper and lower epidermis) and have striate venation. Here, the mesophyll is undifferentiated. 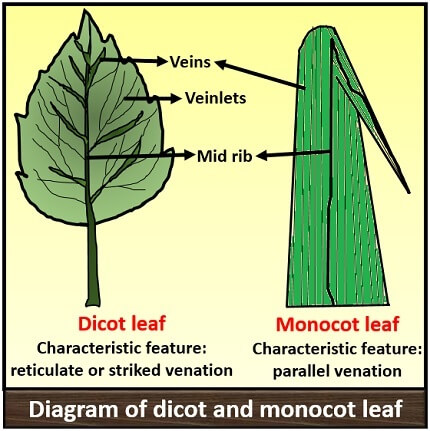 Anatomy of Dicot Vs Monocot Leaf

To know the whole concept of dicot and monocot leaf cell, there are some properties which are as follows: 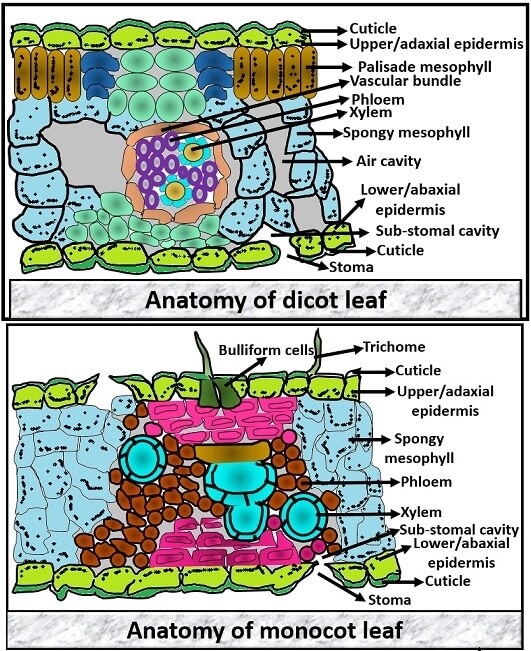 It is a secondary covering that protects the internal cells against damage. It divides into:

Monocot leaf has the same epidermis layer due to equal distribution of stomata. In contrast, the stomata in dicot leaf are present mostly in the lower epidermis and less or no stomata on the upper epidermis.

These are the cells that are present below the epidermis. It is the middle layer of a leaf that constitute most of the leaf. It has a high number of chloroplasts that shows photosynthetic activity. In dicot leaf the mesophyll is differentiated into two cells:

Oppositely, undifferentiated mesophyll is present in the monocot leaves. It has only spongy mesophyll, which is spherical in shape and is compactly arranged.

It consists of vascular tissues xylem and phloem that plays a significant role in the transportation process. Xylem helps in water transportation which contains vessels, tracheids etc. Phloem contains sieve tubes and companion cells that help in food transportation. The size of the vascular bundle depends upon the size of veins.

These are the large, colourless, empty cells that attach to the upper epidermis and play a significant function in rolling and unrolling of leaves. In dicot leaf, bulliform cells are absent, whereas present in a monocot leaf.

Therefore, we can conclude that a dicot and monocot leaf differs from each other by the morphological features like venation pattern, symmetry, shape, size, colour and also by the intrinsic feature, i.e. anatomy of the leaf cell.

2 thoughts on “Difference Between Dicot and Monocot Leaf”