The difference between plant and animal cytokinesis is mainly due to the following factors like:

Both the plant and the animal cell divides their cytoplasmic contents equally between the two identical daughter cells but through different mechanisms. In a plant cell, the cytoplasmic division occurs via the fusion of phragmoplast associated vesicles at the metaphase plate. Oppositely, animal cell cytokinesis occurs via constriction of the concentric contractile ring towards the centre of the cell.

Cell abscission is a stage, during which a mother cell separates into two halves with the same nucleocytoplasmic material. Cell abscission In a plant cell takes place through the expansion of cell plate towards the periphery. In contrast, cell abscission in the animal cell occurs via the ingression of cleavage furrow towards the centre.

Thus, it is a cell division that facilitates the equal distribution of the cellular contents between the two daughter cells in case of both plant and animal cells. It is an important event, which decides the successfulness of all the previously occurred mitotic events. Cytokinesis is the last, but the most crucial stage of the cell division cycle that is necessary for the growth and development of all the living cells, including plants and animals. But, the mechanism of cytokinesis in both the plant and animal cells differ, which we fill further study in this article.

What is Cytokinesis in Plants?

Cytokinesis in plants is defined as one of the cytological events, which uniformly divides the cellular contents of the mother cell between the two daughter cells, as the cell partition occurs via the fusion of phragmoplast associated vesicles.

Here, the microtubule-organizing centres form microtubules, and the Golgi body synthesizes many small membrane-bound vesicles that are filled with the cytoplasmic material of the plant cell. 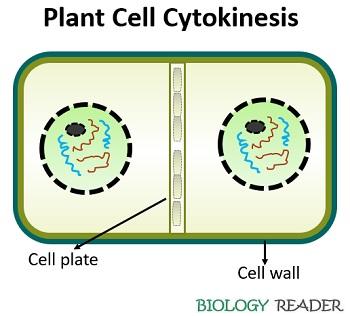 The fusion of vesicles results in deposition of the starchy material within the plant cell, which is called a cell plate formation. Then, to form the cell wall, a few polysaccharide vesicles fuse to extend the cell plate laterally. As a result, the cell plate ultimately merges with the cell membrane and separates the parent cell into two identical daughter cells.

What is Cytokinesis in Animals?

Cytokinesis in animals is defined as one of the cytological events that evenly distributes the cell material of the parent cell between the two daughter cells after the cell partition occurs through a cleavage furrow or cell constriction method. It starts from the anaphase stage and occurs concurrently till the telophase stage of the cell cycle. The microfilaments constrict to form a concentric contractile ring in between the animal cell.

The concentric contractile ring acts as a mid-body that contains contractile bundles of the actin and myosin-II filaments. Actin filaments form at the division plane, and the myosin filaments pull these to form a ring-like structure within the cell. This contractile ring gradually contracts towards the centre or moves to the inward direction, by making a cleavage furrow. 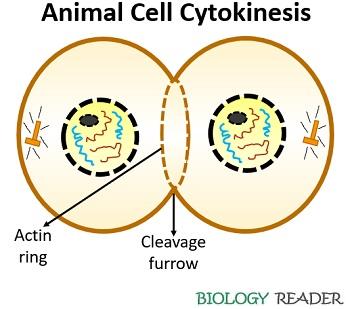 A cell facilitates the uniform distribution of the cytoplasmic and nuclear contents through the mid-body. Then, cell abscission occurs as the cleavage furrow ingresses from the periphery towards the centre, which results in cell partitioning of the parent cell. Two nascent cells will be produced after the cell division, where each will have the same proportion of the cytoplasmic material.

Thus, we can conclude that the process of cytokinesis is a crucial event in the cell cycle that ensures the uniform partitioning of the nuclear and cytoplasmic contents between the two developing cells. Cytokinesis generally involves the extensive restructuring of the cellular contents, and it begins after the chromosomal segregation. In both plant and animal cell, the event of cytokinesis is a pivotal step for cell growth and development.