The life cycle of Achyla species involves asexual or sexual modes of reproduction. The genus Achyla includes approximately 47 species and belongs to the group of oomycetes or water mould. Few species of Achyla are phytopathogens like Achlya conspicua and Achlya klebsiana.

Conversely, sexual reproduction in Achyla species is achieved occurs through the gametangial contact of antheridium and oogonium. This post describes the features of the genus Achyla and different growth phases (vegetative, asexual and sexual) in the life cycle of Achyla species.

Before moving on to the life cycle of Achyla, let us discuss the structural features: 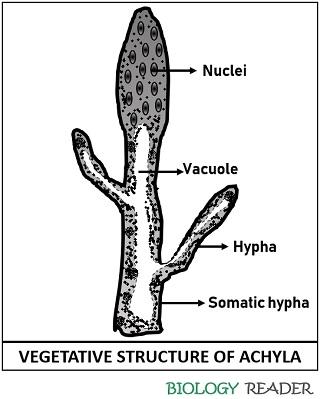 Members of the genus Achyla reproduce vegetatively by forming a dense or aggregated mass on the hyphae in the form of gemmae or thick-walled chlamydospores. The cytoplasmic mass of vegetative hypha transforms into a mass of spherical cells either at the terminal or intercalary position. 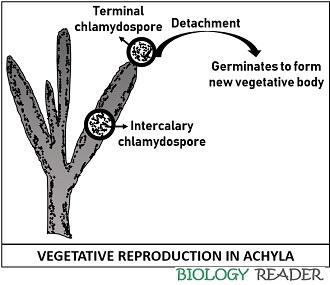 Chlamydospores are the resting spores densely filled with protoplasm, which develop on the coenocytic hyphae. In favourable conditions, the chlamydospores detach from the hyphal body through transverse septa. Later each chlamydospore may form a new vegetative structure.

It occurs via sporulation of the motile zoospore that is summarized below. Zoospores appear pear-shaped with two apical flagella. They can also appear kidney-shaped with two flagella. A new vegetative body forms after the encystment and germination of zoospores.

Then, a sporangium separates from the hypha through a basal septum. During the first preliminary division stage, the central vacuole develops some ridge-like structures inside the dense protoplasm. The ridges are arranged in the form of intersecting lacunae, after which the sporangium divides into polygonal masses.

After that, a stage appears where the protoplasm achieves a homogeneous phase. The spore initials of polygonal masses are now ready to discharge out. Each spore initials are uninucleate. On maturity, spore-initials increase in size, become separated from each other and are termed primary zoospores.

Ultimately, the entire mass is discharged out to form a secondary zoospore. The secondary motile zoospore (biflagellate) swims for some time and again encyst except in Achyla aplanes. Finally, the zoospore will germinate in favourable conditions and give rise to the new hyphal system.

It is of oogamous type. In Achyla species, the male or female sex organs, i.e. antheridia and oogonia, are found on similar somatic hyphae. The majority of Achyla species are heterothallic, while few are homothallic. They undergo sexual reproduction through a method of gametangial contact.

Oogonia are the spherical structures that grow at the apical portion, either on the short lateral hypha or main hypha. Thus, the vegetative hypha that gives rise to the formation of oogonia is called a female or oogonial branch.

The female branch propels to develop a sac-like oogonial initial. The oogonial initials contain cytoplasm and nuclei in a homogeneous state, and later a central vacuole appears. After successive stages, the oogonium or swollen body separates out of the hypha by a basal septum.

Oogonia appear annular in shape and possess a thin, smooth and hyaline wall. Inside the oogonium, few nuclei degenerate, and the remaining divide mitotically to develop at least 2-6 oospheres. The mature oospheres appear spherical, uninucleate and devoid of a surrounding wall.

Antheridia develop on slender vegetative hyphae. They originate either from main hyphae or oogonial stalks. Antheridial protrusions grow in size, and the dense multinucleated protoplast shifts toward the swollen tip.

Then, karyogamy takes place by the fusion of the male nucleus with the nucleus of the oosphere. Fertilised eggs of the oogonium develop a thin wall.

Oospores release out after dissolution of the oogonial wall. Then, oospores go into the resting phase for a while and germinate in favourable conditions. Upon germination, a thin layer surrounding the oospore bursts out.

After several meiotic cell divisions, the germ tube comes out of the inner protoplast into a branched and slender tube. After germination of oospore, the formation of zoosporangium produces zoospores, each of which germinates to develop new vegetative bodies.