Lichens are complex organisms that show a mutualistic relationship between fungi and algae by possessing characteristics of both. They show polymorphism by existing in diversified forms (sometimes plant-like) with different colours, sizes, and textures. Lichens represent the close association or symbiotic association of fungi with few algae and cyanobacteria.

Lichens are not plants, but at times they appear as tiny leafless branches or flat leaf-like structures. In addition, they also form organic food by their own through photosynthesis, like plants. Macro and micro-lichens are the two common forms. They grow in a variety of substrates like soil, wood, concrete etc.

Unlike plants, lichens lack a root system for water and nutrient absorption. It constitutes about 6% of Earth’s land surface. It is estimated that lichens account for nearly 17,000 to 20,000 species, which are known so far.

Lichens are bizarre organisms that show a mutualistic relationship between dominant partner mycobionts (like fungi) and phycobionts like algae and cyanobacteria. Ascomycetes and basidiomycetes fungi are the dominant partners that give lichens the majority of their characteristics like thallus organization and fruiting bodies. Green algae or cyanobacteria (blue-green algae) are the secondary partners to which fungi associate symbiotically.

The term lichen was introduced by a scientist named Theophrastus. Lichens are ubiquitous, found in a variety of habitats. The examination of lichen’s macroscopic and microscopic characters (such as reproductive structures, spores and cellular features) can be studied via chemical tests and chromatographic methods.

Habitat: Lichen generally lives in humid and exposed conditions. But, they can also thrive in extreme desiccation. They cannot tolerate extreme air pollution because of sulphur dioxide presence. The growth pattern of lichen is slow but perennial (some may remain alive for thousands of years).

The anatomy of lichens reveals that their internal morphology is almost the same in all species.

There are four distinct kinds of lichens. 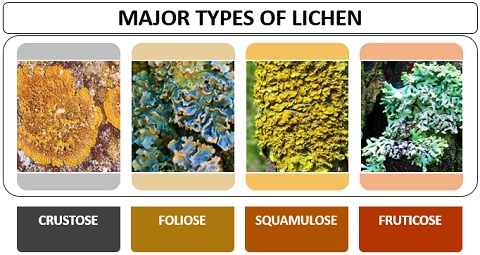 The majority of lichens reproduce through vegetative reproduction, but few species reproduce sexually.

Some lichens may also reproduce sexually through different spores or fruiting bodies, as seen in fungi. As we know, most of the members belonging to the family of Ascomycetes (Ascolichens) and Basidiomycetes (Basidiolichens) are the dominant partners of lichens.

Ascomycetes possess apothecia, perithecia and cleistothecia as the reproductive structures, which develop fruiting bodies or ascospores inside a sac called “Asci“.

We can conclude that lichens possess mycobionts or fungal components that provide shelter, water, and nutrition to the algal biomass. In return, the algal cells (green algae or cyanobacteria) undergo photosynthesis and provide organic food to fungi. In this way, lichens show a symbiotic relationship where both the organisms are mutually benefitted.