Sir Mendel has honoured as “Father of Genetics” for his great efforts to explain the theory of inheritance that is now popularly known as Mendelian inheritance or genetics.

To explain the theory of inheritance, Gregor Johann Mendel introduced three approaches, namely the law of dominance, law of segregation and law of independent assortment.

Sir Mendel performed experiments by taking a plant species (Pisum sativum or an ordinary garden pea) with different traits. In this context, we will learn the definition, mendelian traits, law of dominance, law of segregation and law of independent assortment.

It refers to the theory of inheritance that postulates three generalizations by explaining the law of dominance, segregation and independent assortment. Mendel performed experiments in his monastery’s garden on a pea plant. According to the Mendelian inheritance and genetics: 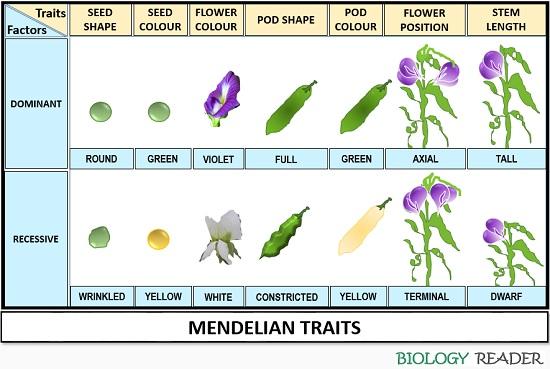 The ideal reasons for experimenting with Pisum sativum include:

To explain the law of dominance, Mendel had given three postulates:

It states that an individual carries two factors for a particular trait, which separate during the gamete formation, after which a gamete will take only a single factor. The discrete units of inheritance are the separate and distinct units that do not blend if present together.

This law is formulated for the diploid organisms that reproduce sexually and produce haploid gamete. To explain the law of segregation, Mendel postulated that:

Let us take a case by performing a monohybrid cross between the purple coloured (PP) and white coloured flower (pp) of a pea plant. 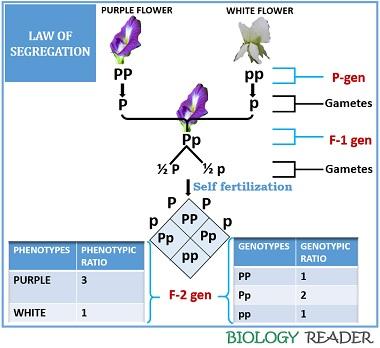 At the time of crossing over, a gene separates into distinct alleles where one factor from each parent will inherit into the F-1 progeny. ‘Pp’ will form in a first filial generation where a dominant factor (P) will conceal the phenotypic characters of a recessive allele (p).

On the self-pollination of F-1 progeny, we will observe the production of both purple coloured and white coloured flower with a phenotypic ratio of 3:1 and a genotypic ratio of 1:2:1. Law of segregation gives a brief on the law of dominance by focussing on some other approaches and explains the law of incomplete dominance.

After performing repeated experiments on pea plant, Mendel experimented on other plants by taking different traits. He found that the progeny formed in the F-1 generation did not show any features of the P-generation.

Example
To explain the law of incomplete dominance, Mendel performed crossing over between the red coloured (RR) and white coloured (rr) flowers of Antirrhinum species. 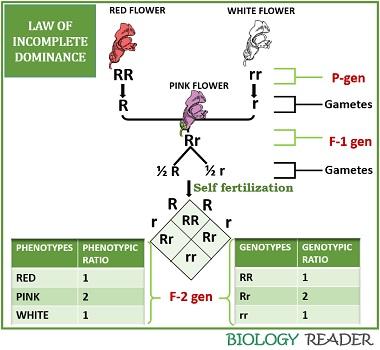 The two breeds ‘RR’ and ‘rr’, after crossing over, produced pink coloured flowers in the first filial generation with a genotype ‘Rr’. On self-pollination of ‘Rr’, the genotype ratio (1:2:1) will be the same as the law of dominance, but the phenotypic ratio (3:1) will change into 1:2:1.

Mendel concluded that the dominant allele of the ‘Rr’ gene would not dominate entirely over the recessive allele that resulted in the formation of pink snapdragon flower in place of red.

Mendel proposed a law of independent assortment by experimenting with a dihybrid test cross of two independent traits. According to this law:

Test cross between the pea plants having round, yellow seed with the wrinkled, green seed. 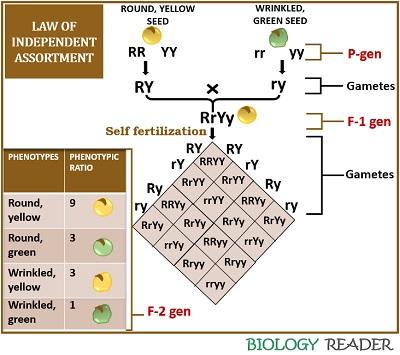 After crossing over, all round, yellow seeds will produce in the first filial generation. When the F-1 hybrid plants are allowed for self-fertilization, we could see the inheritance of independent seed colour characteristics from the original varieties.

After performing such a dihybrid cross, Mendel concluded that the segregation of the seed colour is independent of the seed shape. It results in the evolution of new characters and some parental characters in the offsprings.

Initially, Mendel’s theory faced many controversies and rejections and not accepted by many scientists. The Mendel experiment became successful when T.H. Morgan and his co-workers compared the Mendelian model with the chromosomal model of inheritance.

They concluded that the chromosomes are the actual carriers of such discrete factors, what we now call genes. Mendelism is one of the popular theory in genetic science that explain the factors of inheritance.