The difference between primary and secondary metabolites produced by the bacteria lies in their origin and function. Besides bacteria, different plants and fungi produce a wide range of metabolites.

This post discusses the differences between the bacteria’s primary and secondary metabolites. Also, we will study the comparison chart, definition and examples between the two.

Metabolites can serve as intermediates and end products of metabolism. And metabolism is a combination of anabolic and catabolic reactions.

Primary and secondary metabolites are the two types of metabolic products. Microbes have a tremendous capacity to form various products after consuming different substrates.

Note: Microbes generate metabolites during or at the end of biochemical reactions. In addition, they can produce both high and low molecular weight metabolites.

This post also discusses bacterial growth in relation to trophophase and idiophase.

During trophophase, the bacterial cells go through:

Bacteria produce end products during their stationary phase that are the secondary metabolites. Likewise, plants, fungi and animals also produce such metabolites during secondary growth cycle.

During idiophase, the bacterial cells go through:

Types and Examples of Primary Metabolites

Following are the types of primary metabolites: 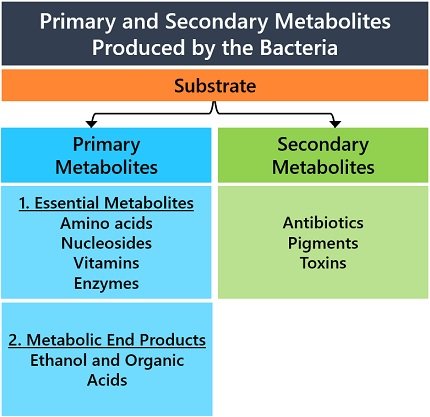 These are not classified into any type. Secondary metabolites include antibiotics, alkaloids, pigments etc.
1. Antibiotics

Here, a graph depicts the cell growth and synthesis of metabolites in relation to time. 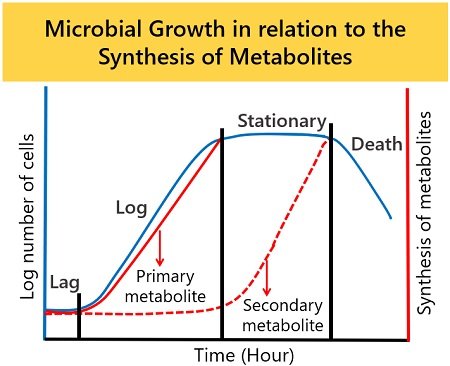 If you look into the log number of cells Vs time, there are four phases. Lag, log, stationary and death phases represent the different stages of bacterial growth.

Cells exhibit cellular activity. But, cell growth does not occur. The bacterial cells may show a slight increase in size. However, no cell division occurs during this phase.

Note: The acceleration phase is a short transition phase. It occurs between the lag phase and log phase. During this phase, cells tend to grow slowly.

Cells undergo cell division through binary fission. As a result, cell doubling occurs after each generation time. At the same time, metabolic activity is very high.

Note: The deceleration phase is short-lived. It occurs after the cell growth in the log phase decreases.

Here, the cells acquire accumulated wastes of the medium. Later, an exponential increase in the number of dead cells occurs. In addition, population growth experiences a sharp decline.