Pinocytosis is a kind of endocytic process. It refers to the cellular mechanism where the bilayer cell membrane invaginates to form a sac to uptake the extracellular fluids and solutes into the cytoplasm.

Pinocytosis is a spontaneous endocytic process, which occurs in almost all cells. It prevalently occurs in eukaryotes. Pinocytosis, cell drinking or fluid-phase endocytosis does not occur in a particular or specialized type of cell.

Thus, pinocytosis merely refers to the cellular process that brings the extracellular fluid along with the solutes from cell surrounding into a cell cytosol. In this post, we will discuss the definition, macropinocytosis, micropinocytosis and functions of the pinocytosis mechanism.

Macropinocytosis and micropinocytosis are the two standard methods, depending upon the vesicle size and the amount of extracellular fluid that enters the cell. 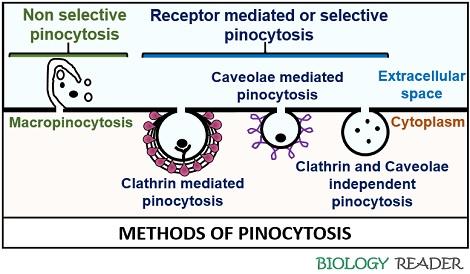 However, it is a constitutive process that requires stimulation of the primary innate immune cells like macrophages, dendritic cells, and monocytes etc., by the growth factors. A cell undergoes remodelling of the actin cytoskeleton and later extends to form an arm-like claw, which eventually reconnects to develop a big vesicle or “Macropinosome”.

Macropinocytosis is an action-driven endocytic mechanism, first introduced by a scientist named Warren Lewis in 1930. It involves the following sequential steps:

As macropinocytosis is a non-specific method, few pathogens may use macropinosome vesicles to reach their target cells.
Example: E.coli produce Shiga toxin, which enters the target cell through the micropinosome in order to cause gastrointestinal complications.

It refers to the method in which the clathrin-coated, caveolae-coated, and uncoated vesicles ingest the macromolecules of size less than 0.2 µm in diameter.

Here, the macromolecules bind to the cell surface receptors, which results in the polymerization of clathrin around the cell membrane through the association of adaptor molecules.

Clathrins act as the triskelion molecules, consisting of one heavy and light chain with a molecular weight of 180 KDa and 35 KDa, respectively. 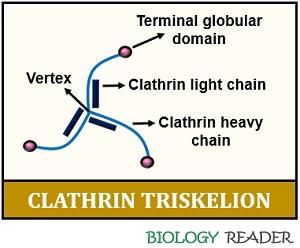 The terminal end of clathrin chains possesses a globular domain and the central part (vertex). A clathrin molecule appears as a “three-legged structure”. AP-1, AP-2, AP-3 and AP-4 are the four typical adaptor molecules, forming a layer between the clathrin lattice.

When a clathrin-coated bud forms, a cytosolic protein (dynamin) polymerizes over the neck of the invaginated pit. The dynamin protein releases complete clathrin-coated vesicle into the cytoplasm from the donor membrane by utilizing the energy derived from the GTP hydrolysis.

Then eventually, the complete clathrin-coated vesicle fuses with the early endosome. As a result, the clathrin coating will be shredded off by a process called “Uncoating”.  Later, the early endosome matures, turns more acidic, and causes a detachment of a ligand molecule from the cell receptor. 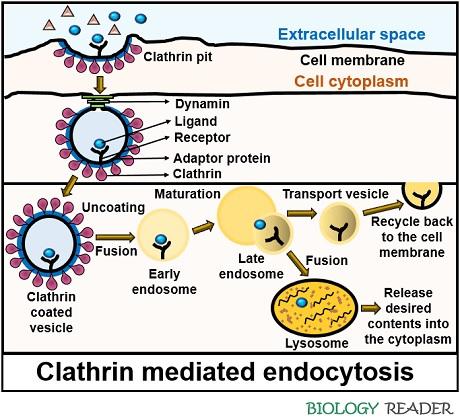 A receptor will remain inside the endosome, and later a cell transport it back to the bilayer cell membrane for recycling. A ligand molecule within the late endosome interfuses with the lysosome. Consequently, a ligand molecule goes through lysosomal degradation.

Lysosomes generally cause acidification of the ligand to break it down into simpler constituents and expel the undigested material into the cell surrounding through an exocytosis mechanism.

Example: Uptake of LDL by the LDL receptors into the clathrin/AP-2 coated vesicles have a diameter equal to 120 nm. The other example includes the internalization of ferrotransferrin by the transferrin receptor into a clathrin-coated sac.

It is a clathrin-independent endocytic pathway that generally occurs in endothelial cells and adipocytes. Caveolae pits appear as the flask-like invagination, and they are rich in proteins plus lipids. Caveolins and cavins are the proteins contributing to the two primary elements of the caveolae complex.

In non-muscle cells, CAV-1 and CAV-2 are the two common caveolin proteins. The third kind of caveolin (CAV-3) is muscle specific. Each caveola comprises a majority of CAV-1 molecules (around 140-150). 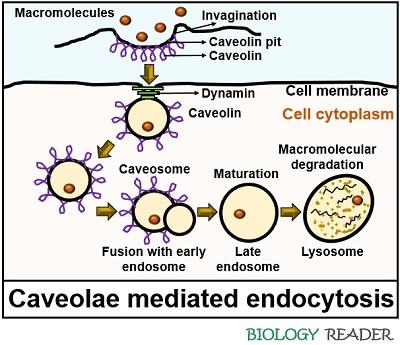 Cavins are the proteins contributing to the structural and functional components of caveolae. Mammalian cavin proteins are of three kinds, namely cavin-1 (PTRF), cavin-2 (SDPR) and cavin-3 (SRBC), while cavin-4 (MURC) is muscle specific.

There are approximately 50 cavin proteins associated with each caveola. Caveolin is a protein that forms and maintains caveosomes. The caveolin protein comprises both cytoplasmic N and C terminals.

Eventually, caveolae coated pits detach from the bilayer cell membrane and turn into complete vesicles with a diameter of 80 nm. Finally, the caveosomes collapse with the lysosomes.
Example: Albumin, folic acid, cholera-toxin etc., are the cargo substances that are internalized via caveolae dependent endocytosis.

Therefore, we can conclude that pinocytosis is an endocytosis mechanism that ingests the extracellular matrix molecules into the cytoplasm via pinocytic vesicles. This method of membrane transportation is less specific than phagocytosis, as it mediates bulk transport.

Once the pinocytic vesicle pinches off from the bilayer cell membrane, it floats in the cytoplasm like a bubble. The vesicle can be passed undisturbed from one to the other cell, or it may fuse with the endocytic sac to release the dissolved nutrients into the cytoplasm so that the cell may utilize it.