Genetic codons are the gene sequences which encodes specific amino acids that polymerize to form proteins. DNA is the heritable material that serves as a source of the hereditary unit, which transfers genetic information from one to the next generations.
Therefore, in a cell, DNA is a director that mediates the synthesis of proteins.

A genetic code can define either as the RNA or DNA codons, which are generally expressed in a pattern of triplet codons of nitrogenous bases. A genetic coding system has 64 sets of triplet codons, which encodes specific amino acid to form a functional protein. A triplet coding system has four different combinations of the nitrogenous bases, in which each encodes for one of the 20 essential amino acids.

A genetic code is degenerative because of many codons code for similar amino acid. Three codons serve as termination or stop codons, and one functions as the initiation or start codon out of 64 nucleotide triplets. The termination codons, i.e. UAA, UAG and UGA, play a significant role in the cessation of translation, whereas initiation codon, i.e. AUG or ATG mediates the synthesis of proteins.

Genetic codons hold the set of information or gene sequences, by using which the living cells can translate the genetic information into functional proteins. A codon is a unit of genetic code, which is a combination of three nucleotide base.

While studying the genetic coding system, we will go through the following important terms:

It can define as the nucleotide triplets, which have a base sequence corresponding to the type of amino acid. Codons are triplets of nucleotides, or we can say it comprises three bases of either RNA or DNA. The codons of mRNA give us the key to translate the DNA information to build structural or functional protein. In a polynucleotide chain, 64 codons represent specific amino acid.

It can define as the whole set of codons that translate the DNA language into 20 essential amino acids. A genetic coding system comprises a group of codons, formed primarily by the different combinations of the four bases in the RNA or DNA. According to the genetic coding, a codon contains three letters or bases.

There is a total of 64 combinations of DNA or RNA codons. By the specific pairing between the codons (mRNA) and anticodons (tRNA), a ribosome adds particular amino acid to form a polypeptide chain during translation.

At the time of protein synthesis, a single type of amino acid can be coded by more than one codon. This is what we call redundancy or degeneracy of the genetic code. For instance, an amino acid threonine (Thr) is coded by ACU, ACC, ACA and ACG. In a genetic coding system, AUG and UGG are the only codons, which encodes a single amino acid viz. methionine and tryptophan, respectively.

In a genetic coding system, start codon is necessary to initiate the process of mRNA translation or protein synthesis. It is also called initiation codon. AUG is an initiation codon, which encodes methionine in eukaryotes and formyl methionine in prokaryotes. It signals the extension of the polypeptide chain. GUG and UUG are also called start codons that are found in a few species.

A nucleotide is the combination of nucleoside (nitrogenous bases and pentose sugar) plus a phosphate group. It is the primary or functional unit of DNA and RNA.

It can define as the organic chain formed by the joining of different amino acids via a peptide bond. Two or more polypeptides entangle in building a functional protein.

It was given by George Gamow which was accepted over the doublet codon theory. According to the triplet codon theory, the four nucleotide bases of DNA or RNA can form 64 combinations of genetic codons that is quite enough for the coding of 20 amino acids.

George Gamow had only given the statistical data, i.e. he only provided the mathematical approach to explain the genetic codon. He did not provide any experimental proof to justify his theory. Later, Nirenberg (1961) performed several experiments to conclude how the codons encode amino acid.

Later, Har Gobind Khorana further investigated the rest of the amino acids coded by the different codons by following the experiments carried out by Nirenburg.

In a genetic code chart, all the four nucleotide bases are positioned into the three columns. The codons that care coloured in red are called stop or termination codons, and a codon with green colour is called start or initiation codon. The table given below explains the universal genetic codons of DNA and RNA. 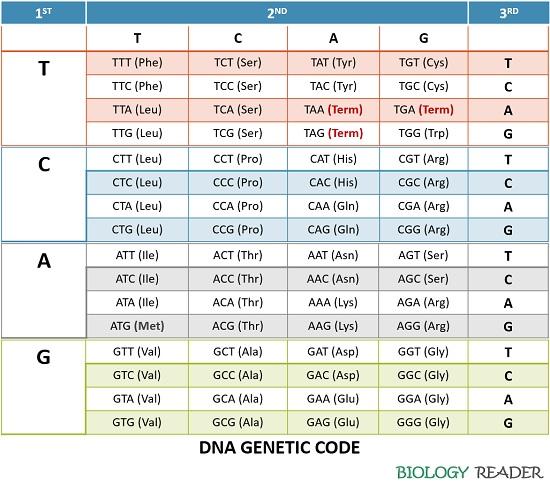 There is a slight difference between the DNA and RNA codons due to the difference in the nucleotide base. In RNA, thymine is replaced by the uracil base, and the rest will remain the same. Both the DNA or RNA genetic coding system possesses three non-sense codons, one start codon and 60 sense codons. 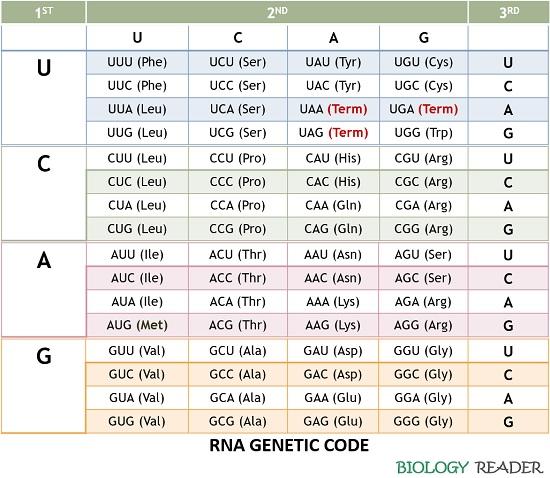 A genetic code is universal, i.e. all the living organisms will have the same number of genetic codons (64) that encodes specific amino acids (20). Due to the similarity of genetic code among all organisms, the evolutionary history of all the organisms (starting from prokaryotes to eukaryotes) will be the same.

The genetic codons are non-ambiguous, or the codons of the gene coding system encode one amino acid at a time.

The genetic codons are non-overlapping. In a genetic coding system, a single codon can encode single amino acid at a time, which means a codon cannot encode two or three amino acids simultaneously. 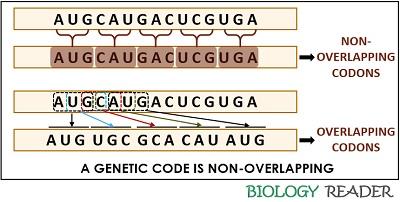 The reading frame of the genetic code is continuous, i.e. there is no comma or any symbols in between them. In simple words, a genetic code has no punctuations in between.

The reading frame of genetic code possesses codons from a 5′ to 3′ end. A genetic code always starts with the initiation codon and ends with the termination codon. The 64 codons code for 20 amino acid. The reading frame of codon always starts with AUG, and the next three letters will be the second codon and so on. In eukaryotes, the reading of mRNA codons in interrupted by introns, which can be removed during mRNA splicing.

Any changes like deletion, addition, and insertion etc. in the reading frame of the mRNA codons cause gene mutations. Point and chromosomal aberrations occur most commonly as a result of any alternations in the genetic codons. Mutated nucleotide sequences or codons may affect the phenotypic features of the person. 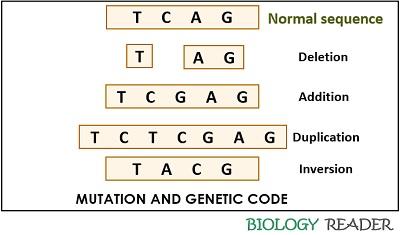 It is the frequency of occurrence of codons in the DNA or RNA, which varies from one species to another species. In simple words, some of the nucleotide bases may occur more frequently in the DNA strand, while few occurs rarely. Therefore, the nucleotide base composition may differ from organism to organism.