The spectrophotometer measures the absorption and spectral bandwidth of the given sample. Absorption is the logarithm of transmittance, i.e. Log (T), whereas transmittance is the portion of light moved through the sample.

The amount of light transmitted or absorbed can be calculated by the readings obtained in a digital meter of a spectrophotometer. This post discusses the definition, principle, types, components and applications of the applications.

The spectrophotometer refers to an instrument that measures the absorbance of the test sample at a specific wavelength by measuring the amount of light transmitted by the sample. This device contains several components like a light source, collimator, monochromator, cuvette, light detector, and digital meter.

Spectrophotometry is a science which deals with the study of light intensity absorbed or transmitted by the different solutions once a ray of light moves through the test sample. Its basic theory concludes that each chemical compound transmits or absorbs certain light according to its relative wavelength.

The spectrophotometer principle depends upon the Beer-Lambert law, which states that a beam of light incidents on the homogenous solution, reflects some fraction of incident light, absorbs some light and transmits the remaining light through the solution.

Both Beer and Lambert have given their own theories on the absorption of radiation. According to Beer-Lambert law, the absorbance is equal to the given mathematical expression:

Where, A= Absorbance of light
I0= Intensity of incident light
I= Intensity of transmitted light
ε= Absorption coefficient
C= Concentration of the absorbing material
l= Path length (cm)

The amount of light transmitted from the solution is inversely proportional to the absorption of light.

As the absorbance of the medium increases, the transmittance of light through the solution decreases and vice versa. Absorbance is a non-dimensional quantity whose value ranges between 0-1.

Based on Light Source 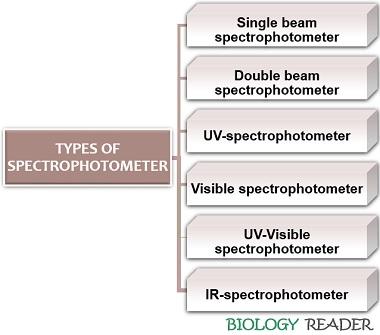 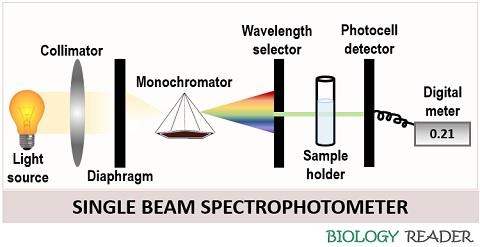 In this, a fraction of light coming from the monochromator device parts into two beams. One falls onto the reference sample and the other onto the test sample. Its mechanism is more or less similar to a single beam spectrophotometer but differs because the dual mirrors divide a single beam of light into two. 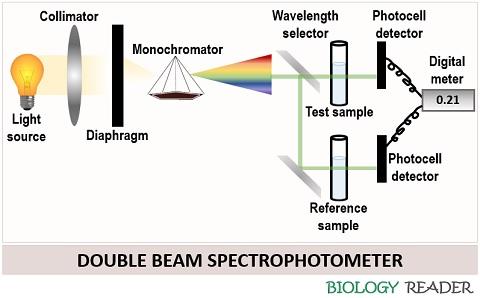 Based on Light Wavelength

It uses cuvettes made of quartz and hydrogen or deuterium lamps as a light source. The hydrogen lamp emits continuous or discontinuous spectral UV- light ranging between 200-450 nm. This device determines the absorbance or transmittance for the fluids and even solutions.

It makes the use of Nernst glowers as a conductive device having a long life. This kind of spectrophotometer helps in studying the vibrations of different molecules at a specific wavelength. Near and mid-IR-rays cause rotational and harmonic vibrations.

A spectrophotometer includes the following elements: 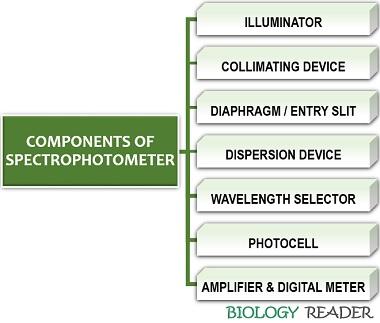 The light source emits continuous or discontinuous spectral bands at varying wavelength. An illuminator provides a polychromatic source of light to the collimating device.

It is an optical device containing a tube with a convex lens on one side and an aperture on the other end. The collimator’s primary function to convert the radiating polychromatic light source into a parallel beam by the adjustable aperture. In the focal plane of a collimator convex lens, an opening or aperture passes the parallel beam onto the dispersion device via the diaphragm.

A dispersion device is positioned between the diaphragm and the wavelength selector. The diaphragm functions as an entry slit of the polychromatic source of light that ensures 100 % transmittance from the collimator to the dispersion medium.

The dispersion medium reflects the light of the selected wavelength through the exit slit, allowing the monochromatic light source to escape. Prisms, diffraction gratings and filter system are the most common dispersion medium.

For commercial use generally, 60 degrees cornu quartz and 30 degrees littrow prisms are used.

It refers to the optical components commonly used in the visible, UV and IR spectrophotometers. Its degree of dispersion depends upon:

Diffraction grating comprises of few ridges or rulings on the surface, coated by aluminium. It causes transmissive and reflective kind of diffraction.

The filters are first layered with gelatin, then coloured with organic dyes and finally sealed within the glass plates. Now, these are the most common dispersion medium used for the biological and biochemical assays.

The filters can split the different parts of electromagnetic radiation by absorbing and transmitting a particular wavelength. Spectrophotometers consist of a filter system as a dispersion media and also called “Filter photometers”.

The optical filter provides a monochromatic source of light and contains absorption or interference filters. An absorption filter can transmit the desired range of wavelength or spectral elements by blocking some spectral components from a beam of light through an illuminator.

A filter wheel system is a commercial device incorporated with several filters having different wavelength responses and positioned nearly at the circumference of the rotating wheel. Each filter will show spectral bands at a particular wavelength. This kind of system only selects discrete bands.

It refers to the photoresistor that detects the range of light transmitted from the test sample and transforms it into an electrical signal. A photocell detector shows the following properties:

A photocell produces an electrical signal, which is directly proportional to the light reflected from the solution. An amplifier boosts the electrical signal and transfers it to the internal circuit, finally converting the signal into a readable form. The readings in a digital meter can be noted down, and a standard graph between absorption and transmittance can be plotted accordingly.