Endosmosis is the diffusion of water from the cell exterior to the cell interior or cytoplasm. The study of endosmosis is possible if you keep a cell in the hypotonic solution.

In endosmosis, the solute and solvent concentration inside and outside the cell are as follows:

Cells in hypotonic solution have a high solute concentration than outside. But according to the rule of osmosis, solutes cannot cross the selective barrier, only water can.

For this reason, the water from its high concentration, i.e. cell surrounding will enter the cell cytoplasm crossing a selective barrier.

Endosmosis makes the cell swell, turgid or even burst. In this post, we will discuss the definition of endosmosis and some examples to illustrate the mechanism.

Endosmosis refers to water movement from the cell surrounding (with high water potential) to the cell (with low water potential). In other words, endosmosis is the diffusion of water into the cell. As a result, cells in the solution swell, become turgid or may get ruptured sometimes.

Let us discuss some real-life examples to study the mechanism of endosmosis.

Swelling of Raisins in Pure Water

You can perform this activity at your home by simply taking any container, water and some raisins. In the diagram below, you can see a change in raisins before and after osmosis. 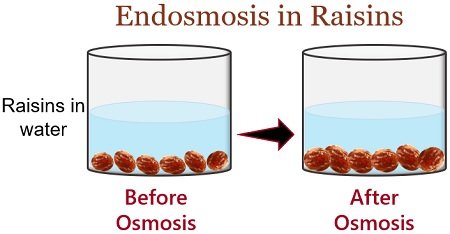 After performing this activity, you could see the swelled raisins. Now the questions are, what happened during the osmosis, and why do raisins get swelled?

Well, raisin cells absorb water during osmosis. And the swelling of raisins occurs due to:

Thus following osmosis, water travels from the cell surrounding to the interior of raisins.

Plants absorb water through leaves, stems, and roots. But, the majority of the water absorption in plants is by roots. Roots absorb water from the soil via endosmosis.

Tiny root hairs or absorbent hairs in the maturation zone of the root absorb water from the soil. They exist as single-celled extensions of epidermal cells in the root. 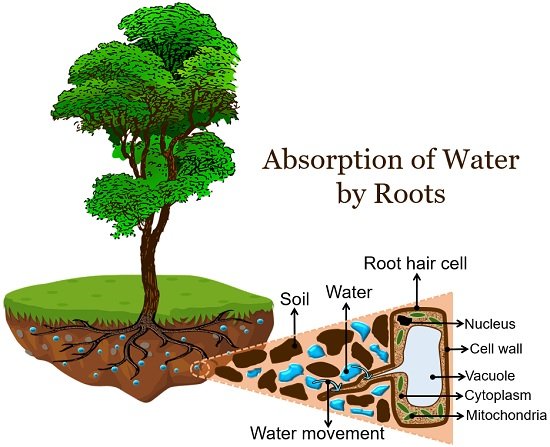 Consequently, root hair cells become turgid and their osmotic pressure or the tendency to take in solvents decreases.

Further, xylem tubes conduct water to other plant parts via capillary action. In this way, root hairs absorb water incorporated within the soil through endosmosis.

Red blood cells are small, red coloured biconcave discs that give the blood its characteristic colour. The red blood cells have a semipermeable cell membrane.

Thus, the water surrounding RBCs travels into the cytoplasm of RBCs via endosmosis. It causes swelling of red blood cells. 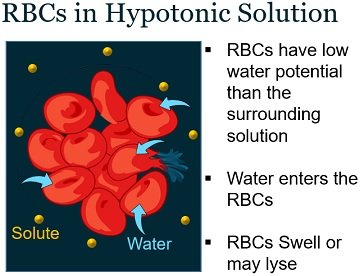 The turgor pressure exerted on the cell membrane control the amount of water that can travel into the RBCs.

Sometimes, RBCs consume more water than their membrane can handle. It leads to the lysis of red blood cells, called hemolysis.

Sometimes you must have seen your fingers pruned after submerging them in water for a while. Pruning is mainly seen in tough skin like the foot and palm.

The cell membrane around the skin cells is not a perfect seal and permits water to move into or out of cells.

Pruning occurs when the cytoplasm of skin cells has a high concentration of salty water. In this case, if you put your fingers into regular or freshwater, the water will flow into the skin cells.

As a result, cells in the fingers absorb water and get expanded or bloated. It results in the pruning of fingers. Sometimes, it’s quite strange to see wrinkled or pruned digits. 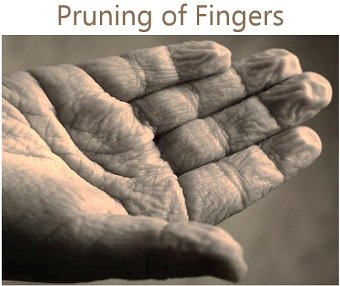 But, it is believed that the pruning of fingers is due to endosmosis. Thus, water enters the skin cells through the semipermeable cell membrane, causing them to swell and wrinkle.

After eating salty foods, you probably feel thirsty, and you would likely search for water. So, after consuming lots of salt:

The above two trigger the process of thirst or inducing osmotic thirst, so we start drinking water. 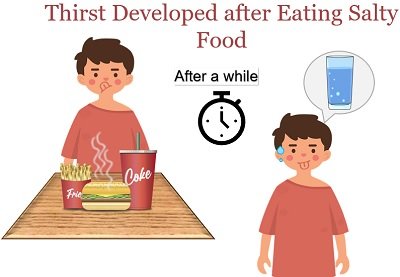 The mechanism of water absorption in fishes is through their skin and gills. Through osmosis, they regulate the concentration of their body fluids.

Freshwater is hypotonic for the saltwater fishes that are living in it. The body fluids of saltwater fish contain more concentration of salts than the salt content outside.

As a result of osmosis, there will be constant water flow into the body of saltwater fishes. So, the saltwater fish urinate frequently to survive in this continuous water supply but cannot survive longer. 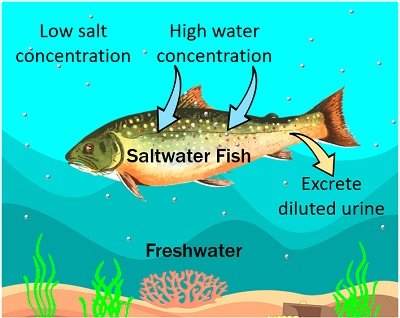 Absorption of Water by Intestine

Osmosis occurs when the chyme from the stomach reaches the small intestine. Intestinal epithelial cells contribute to the lining of the intestines.

Intestinal epithelial cells have low solvent concentration than in the chyme. Thus following osmosis, water moves into the intestinal cells through a semipermeable membrane.

Later, the water moves into the bloodstream via the capillaries near the epithelial cells. 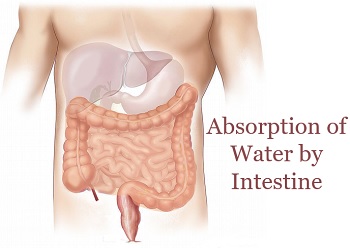 Thus, endosmosis is a type of osmosis in which the water moves into the cell from the surrounding.

The water movement into the cell is due to the difference in the concentration gradient between cells and surroundings.